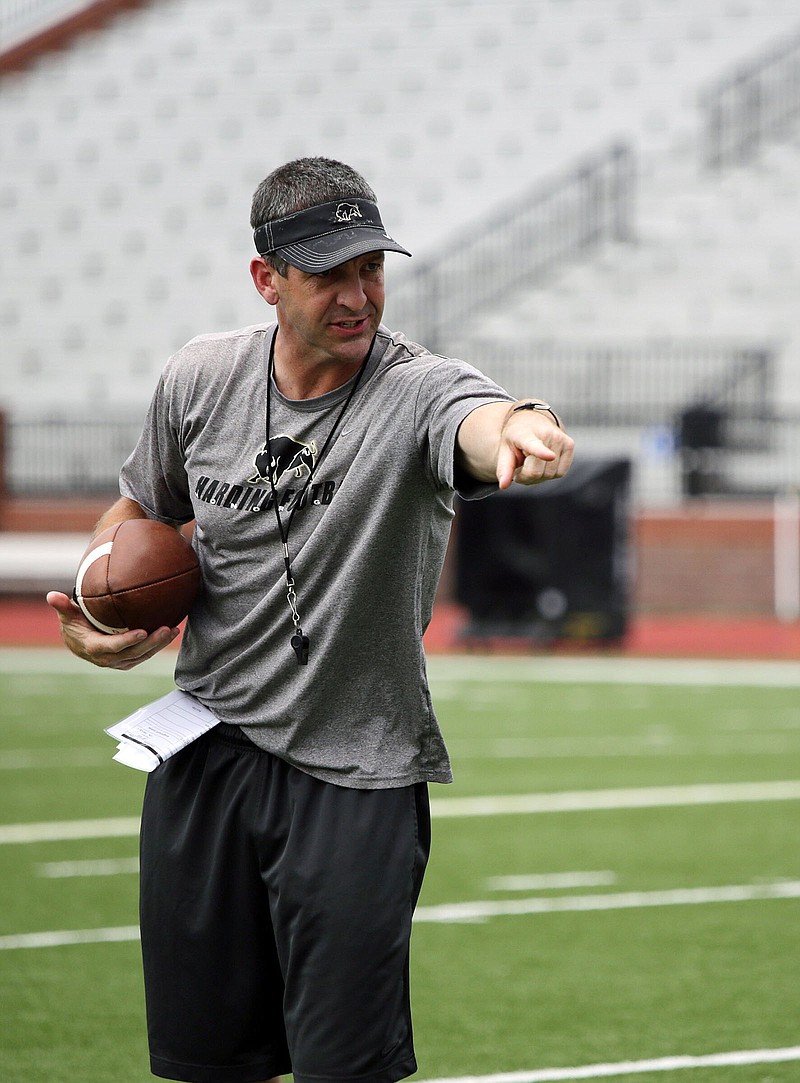 Harding Coach Paul Simmons said the new configuration at First Security Stadium in Searcy, which gives fans an up-close view of games, contributed to the Bisons’ victory over Southeastern Oklahoma State last Saturday. “It would be impossible for me to overstate how exciting it was, how proud I am of our kids, the fans, students, the band, people being right on top of us, seeing the fans sitting on the wall. Honestly when I walked out, I kind of teared up,” Simmons said. (Democrat-Gazette file photo)

There was a different feeling among Harding University players during the team's first home game of the season, but it's one that may soon become a familiar emotion.

The facility underwent a facelift during the offseason when new playing turf was inserted, which was also shifted and extended towards Harding's home stands. In addition, the visiting bleachers were moved closer to the field.

"That felt really good," Harding defensive lineman Jay Marshall said of playing at the team's restructured stadium. "Having the fans closer and new turf, you've got a little pep in your step. The fans were amazing."

The new stadium rearrangements gave fans an up-close view of what the Bisons were able to do to a team that handed them their only regular-season loss last season.

Harding (1-0, 1-0 Great American Conference) pounded Southeastern Oklahoma State for 389 yards on the ground while giving up just 68. Marshall was one of 10 players with at least three tackles for the Bisons, who are hoping to experience a similar atmosphere Saturday when Southern Arkansas rolls into town.

"It would be impossible for me to overstate how exciting it was, how proud I am of our kids, the fans, students, the band, people being right on top of us, seeing the fans sitting on the wall," Harding Coach Paul Simmons said. "Honestly when I walked out, I kind of teared up."

Another overpowering effort landed Ouachita Baptist (2-0, 2-0) back among the top 10 teams in NCAA Division II.

What made the rout even more stunning was that the Tigers did so with heavy hearts after their teammate, defensive lineman Clark Yarbrough, died suddenly on Sept. 4. Funeral services for the senior will be held Friday at 11 a.m. in Garland, Texas.

"With everything that's gone on the last couple of weeks, the guys have had great focus, and they've really tried to handle the emotional side, mental side, physical side of it all," OBU Coach Todd Knight said. "They put it together, played well, and this week will be no different. We've got the funeral on Friday, and we'll have to be able to process all of those things.

"But it's a lot like what Clark's message was and what he had taped on his mirror at home, and that was 'focus.' That's what we have to do. ... put things in their area, celebrate those things at the right time and then be ready when it's time to play football. It's hard to do, but our guys did a good job with it last week, and we've got to be able to do it again this week."

Former Fort Smith Southside standout Taye Gatewood spent three seasons at East Central (Okla.) before deciding to transfer to Arkansas Tech following the 2021 season. So there may have been a little incentive for him when he faced off against his former team last week.

"He played really well," Arkansas Tech Coach Kyle Shipp said of Gatewood, who accounted for four touchdowns to lead the Wonder Boys to a 35-13 victory in Russellville. "I know he was excited about that, and he did a really good job. I was proud of him."

Gatewood, who appeared in 18 games during his time at East Central, finished 13-of-23 passing for 157 yards and tossed touchdowns to 3 different players. He also ran 7 times for 30 yards with a 5-yard score in the third quarter that allowed Arkansas Tech (1-1, 1-1) to build a double-digit lead.

For the season, he's completing 58.3% (28 of 48) of his passes for 375 yards and is tied with Deon Simmons for the team-lead in rushing touchdowns with two.

The longest trip of the regular season wasn't at all kind to Southern Arkansas.

The Muleriders made the 435-mile trek to Weatherford, Okla., and watched a fourth-quarter lead slip away in losing to Southwestern Oklahoma State 24-20 last Saturday. The victory was not only the first of the year for the Bulldogs, but it was also the first time Southwestern Oklahoma State had taken a victory since Nov. 2, 2019 -- a span of 14 games.

SAU (1-1, 1-1) was coming off a 62-31 win in its opener over Northwestern Oklahoma State and had won nine of the previous 10 meetings with the Bulldogs, including the past six. But the Muleriders committed 11 penalties and had four punts, an interception and a turnover on downs over their final six possessions.

Jariq Scales did have a big game rushing for SAU. The redshirt sophomore ran for 125 yards and two touchdowns. His 4-yard score with 10:53 left in the third quarter gave the Muleriders a 20-14 lead before Southwestern Oklahoma State mounted it comeback.

Henderson State will try to stay perfect on the season when it faces the University of Arkansas at Monticello on Saturday, but there's also a chance that a long-standing record could fall.

A victory over the Boll Weevils would make Reddies Coach Scott Maxfield the program's all-time leader in wins.

Henderson State's 51-27 thrashing of Northwestern Oklahoma State last week was Maxfield's 119th with the team, which tied the late Ralph "Sporty" Carpenter for the most in Reddies history. Carpenter, who died in 1990 and was inducted into the Arkansas Sports Hall of Fame posthumously in 2002, won five Arkansas Intercollegiate Conference titles with Henderson State from 1971-1989.

Maxfield, who's in his 17th season at the helm, has led the Reddies to a Gulf South Conference crown, three Great American Conference titles and three NCAA Division II playoff appearances during his tenure.

As its offense continues to churn along, the University of Arkansas at Monticello's defense is starting to stir up things as well.

The Boll Weevils intercepted Oklahoma Baptist four times in running away for a 40-17 victory last week. The quartet of interceptions are tied for the seventh most in NCAA Division II this season.

There were additional accolades handed out afterwards as well for UAM (2-0, 2-0). Defensive back Kaytron Allen was named the Great American Conference's Defensive Player of the Week after picking off two passes – one each from a different quarterback. He stepped in front of a Dayton Wolfe toss and returned in 90 yards for a touchdown in the second quarter. And in the third quarter, he intercepted a pass from Aidan Thompson deep inside Boll Weevil territory.

The senior finished with eight tackles in the game for UAM, which is undefeated after two games for the first time since 2011.

Game of the Week

WHY THE INTRIGUE This will be the only matchup of the week that features two of the conference’s undefeated teams facing off against one another. Henderson State has owned UAM as of late, winning eight of the past nine meetings, and will have plenty of motivation to pick up a win, namely with a chance to make Scott Maxfield the program’s winningest coach. But the Boll Weevils have gotten things done on both sides of the ball through two games. Also, the last time UAM beat its long-standing rivals was in 2018, a 24-17 victory, at Carpenter-Haygood.

KEY PLAYER TO WATCH FOR ARKANSAS-MONTICELLO

Quarterback Demilon Brown, who has rushed for a team-high 256 yards, thrown for 331 yards and combined for 7 touchdowns. He’s coming off a game in which he led the Boll Weevils to touchdowns on four of their first five possessions during a 40-17 demolition of Oklahoma Baptist, which beat them by 25 in 2021.

Running back Korien Burrell, who gashed Northwestern Oklahoma State last week for 100 yards on 15 carries. He also scored 3 touchdowns, which gives him 5 on the season thus far. The sophomore is a part of a deep backfield that features 6 players who have ran for at least 30 yards rushing apiece. 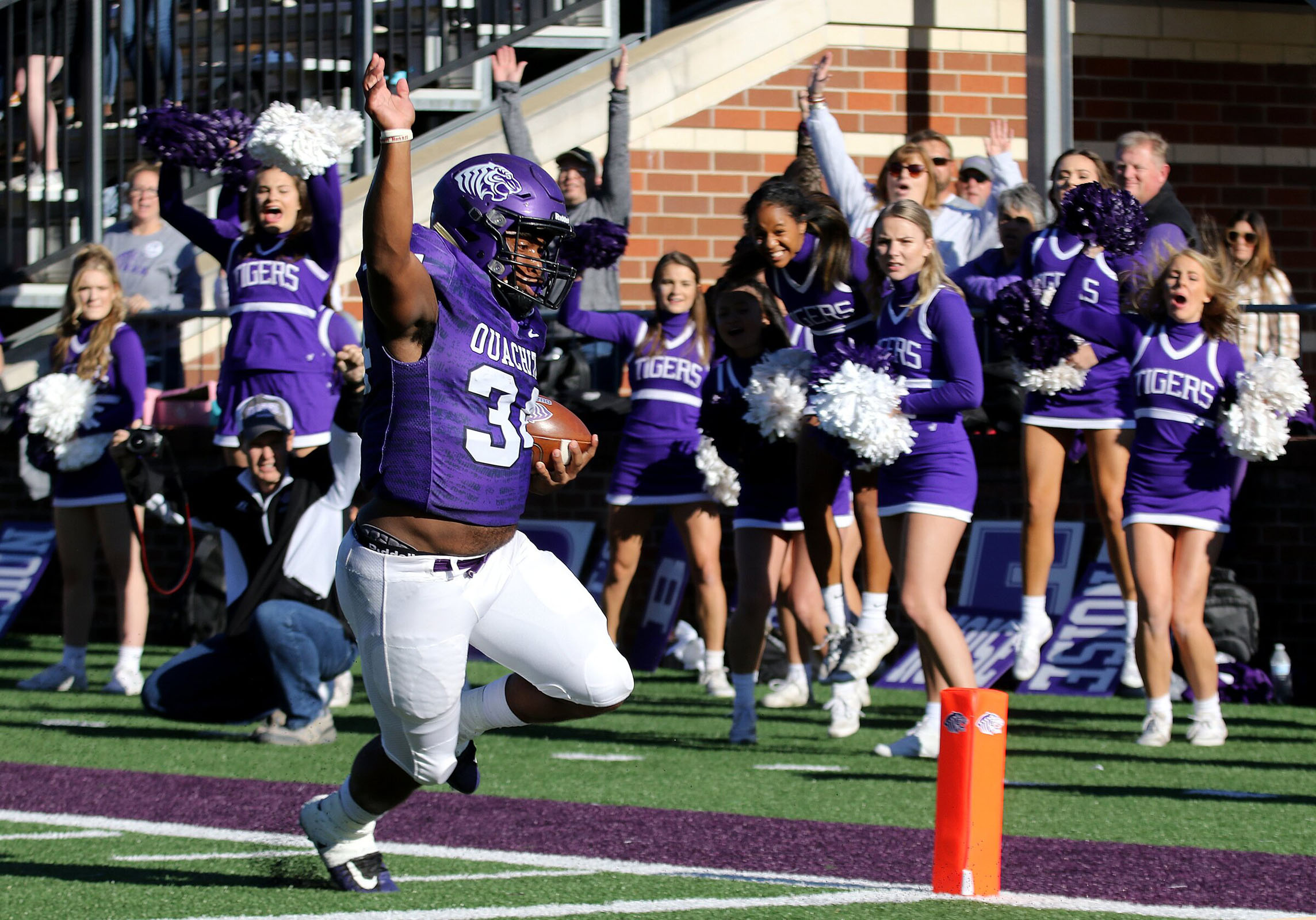 Running back Kendal Givens (34) and the Ouachita Baptist Tigers moved up six spots to No. 10 in the American Football Coaches Association Division II poll after rushing for 335 yards in a victory over Southern Nazarene. (Arkansas Democrat-Gazette/Thomas Metthe)