Memphis walking paying off at ASU 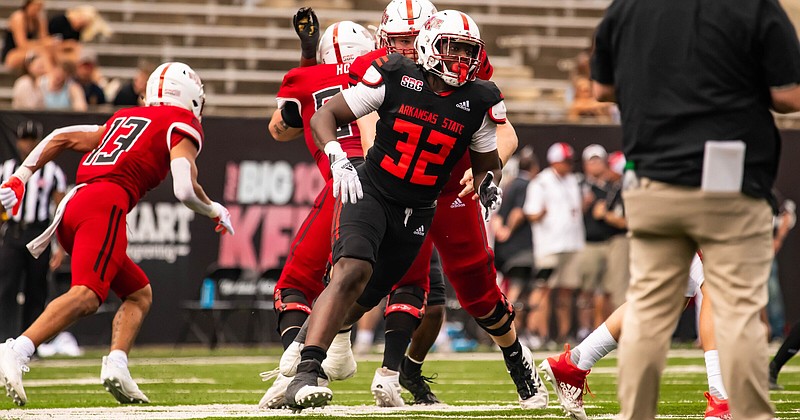 Sophomore defensive lineman Ethan Hassler has made an impact this season, serving as an inside pass rusher, particularly in third-down passing scenarios. He’s one of a handful of Memphis-area players who are having meaningful contributions on defense. (Photo courtesy Arkansas State Athletics)

JONESBORO -- Ethan Hassler has never been long for a particular position.

When Coach Joe Rocconi arrived at Collierville High School, just southeast of Memphis, prior to Hassler's junior year in 2019, the thought was that Hassler would split his time between tight end and wide receiver.

In short order, Rocconi realized he had a defensive force on his hands. Hassler worked mostly as an edge player as a high school junior and senior, only to transition to linebacker upon arriving at Arkansas State in 2021 -- even though his primary responsibilities last season came on special teams.

Now back on the defensive line, Hassler has already carved out a role for the 2022 Red Wolves, serving as an inside pass rusher, particularly in third-down passing scenarios.

By no means is Hassler a centerpiece of ASU's defense. He's played just 16 snaps over two games.

But as a sophomore, Hassler is finding a way to have a meaningful on-field impact. And it's not just a coincidence that he's one of multiple Memphis-area Red Wolves who have quickly arrived as defensive contributors under Coach Butch Jones.

Quantity matters, yes. And ASU has undoubtedly made recruiting Memphis a priority. Yet the likes of Hassler as well as freshmen Keyron Crawford and Javante Mackey suggest the Red Wolves are discovering plenty of quality in their backyard.

ASU has long had a presence in Memphis.

The Red Wolves' series with the University of Memphis -- set for its 61st edition Saturday night at the Liberty Bowl -- dates to 1914 when ASU was First District A&M and hosted West Tennessee Normal School. In the 1980s, Coach Larry Lacewell frequently made the 70-mile trip to build his ASU teams.

Jones himself was plenty familiar with Memphis before taking the helm of the Red Wolves in Dec. 2020. Nearly a decade earlier, during his second season at Cincinnati, Jones began developing relationships in the city and added to them during his five seasons at Tennessee.

In a way that it wasn't at either of his two stops, however, Memphis is truly home base for ASU.

In Jones' mind, "home" consists of anywhere within a four- to six-hour radius of Jonesboro. That realm includes St. Louis, Nashville and Birmingham, Ala., with Atlanta just outside but only a short flight away.

But Memphis is just an hour's drive, allowing Jones and his staff to frequent its programs as the Red Wolves look for under-the-radar prospects.

Crawford is as good of an example as any. The freshman defensive end had three tackles for loss on 17 snaps against Grambling State in Week 1 despite being at the outset of just his second season playing football.

Briarcrest Christian Coach Brian Stewart insisted -- over Crawford's objections that he only played basketball, not football -- that Crawford give football a try.

"I walked down to the gym, he was shooting a basketball and I'm like, 'Come with me,' " Stewart recalled. "'I said, 'Don't you wear a size 15 cleat? Here they are.' I walked him outside [and] taught him how to get in a stance."

By the second game last season, Stewart recognized he had a Division I talent on his hands.

"He makes this unbelievable play of running this guy down from the back, taking the ball out and I said [to my staff], 'Guys, Keyron just got his first college scholarship, I promise you," Stewart said. "I'm sitting in church on that Sunday and I got a text -- it said, 'Coach, who is No. 25?' and I said, 'Told you.' "

Crawford continued to pile up offers throughout the season. Iowa came in late, with Nebraska hosting Crawford on an official visit and Tennessee offering money through name, image and likeness opportunities.

The fact that ASU had the opportunity to spend time with Crawford, including coming to his basketball games at Briarcrest, kept the Red Wolves in pole position for a guy Stewart believes has NFL potential.

Getting prospects to Jonesboro is one thing. Generating production from them is another.

ASU knew it would need its youth in 2022. Only three rosters among the 130 other Football Bowl Subdivision programs are younger.

It's not just a coincidence, though, that multiple freshmen and sophomores from Memphis have emerged through two weeks.

"They're just wired differently," Hassler said of fellow Memphians Crawford and Mackey, who is expected to play as soon as he recovers from a meniscus injury suffered during fall camp.

The Red Wolves dipped back into the Memphis area with the verbal commitment last week of defensive lineman Ian Jeffries from Southaven, Miss. He's the first 2023 recruit from the region.

"They're going to improve, they're going to get better," Stewart said of the Red Wolves' Memphis-based talent. "And Arkansas State football is going to thrive because of it."