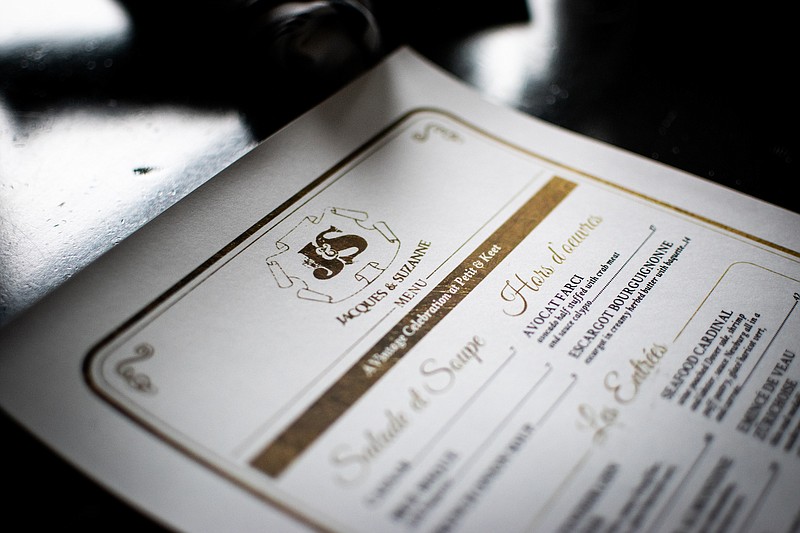 This year’s Jacques & Suzanne Legacy menu will differ from the 2021 version, which featured an escargot appetizer and J&S signature Seafood Cardinal. (Special to the Democrat-Gazette)

Petit & Keet, 1620 Market St., Little Rock, pays tribute this week for the second year — with plans to make it an annual tradition — to the legendary Restaurant Jacques & Suzanne with the “Jacques & Suzanne Legacy Celebration.”

Working last year with the restaurant’s original chef and staff members, P&K re-created J&S’ menu. It was originally intended for a one-night celebration to mark Petit & Keet’s anniversary date, and turned into a four-day extravaganza and even the subject of a documentary film.

Petit & Keet will serve only its Jacques & Suzanne’s menu this evening — which has already sold out — and a condensed version, side-by-side with its regular menu, Friday-Saturday. The full menu had not yet been released by our Tuesday morning deadline, and restaurant representatives say they want it to be a surprise; we’re told it’ll be similar but not the same as last year’s menu. For reservations, call (501) 319-7675 or visit petitandkeet.com.

Petit & Keet partner Louis Petit, of course, was head waiter at the upscale French-Swiss “coat-and-tie” restaurant on the 30th (top) floor of what was then the First National Bank Building (subsequently, as banks gobbled each other up, First Commercial and now Regions Bank). Swiss husband-and-wife restaurateurs Jacques and Suzanne Tritten lent their names to the restaurant when it opened in June 1975. The original staff included General Manager Henri Monod and Executive Chef Paul Bash; Denis Seyer was a chef there before leaving in 1980 to found Le Casse Croute (later Alouette’s and Gypsy’s Grill & Bar) on North Rodney Parham Road; the late Andre Simon was the pastry chef.

Franchisee Danny Gilliland of Sweet “P” Enterprises confirms that the temporary closure of the Popeyes Louisiana Kitchen paired with the Road Runner at 11401 Cantrell Road, Little Rock, on the edge of the Pleasant Ridge Town Center, is now permanent. Gilliland blames primarily the long and ongoing road construction along that stretch of Cantrell, which made it nearly impossible for customers to get in and out, and as he was nearing the end of his lease, he decided to close it altogether. “We had that location for 23 years,” he says. “It was a sad day.”

Scott Tashie, co-owner of City Silo Table + Pantry, a Memphis-based mini-chain planning to add west Little Rock — in the former Pei Wei in the Promenade at Chenal, 17701 Chenal Parkway — to its two locations (and one in the works) in Memphis, says he has been working with the architect on plans and drawings and is now hoping to open here in the spring of 2023. The restaurant project, in partnership with Nashville, Tenn.-based Fresh Hospitality and JTJ Restaurants (James, Tommy and Jake Keet) will occupy half of the free-standing building that has also previously housed a mattress store; the space has been vacant since the Pei Wei outlet closed in August 2018. It won’t be, as one of our readers had gotten the impression, a vegan restaurant, but the menu in Memphis spans the needs of “vegan, vegetarian or an omnivore,” including all-day, upscale breakfast (including a Greek yogurt bowl and dishes made with tempeh and with dairy-free cheese options), small plates, salads (“Kale Caesar!”), acai bowls, a la carte tacos, burgers, sandwiches, coffee concoctions, juice concoctions, smoothies and kombucha cocktails. The website, thecitysilo.com, cites Rebekah and Scott Tashie’s “signature approach to conscious comfort food,” which strives for “a happy medium between eating trendy, healthy food that doesn’t fill you up and heavy Southern, nap-inducing meals.”

Le Culinaire, inside the Culinary Arts and Hospitality Management Institute at University of Arkansas-Pulaski Technical College Little Rock-South, 13000 Interstate 30, has started offering Wednesday lunches and dinners to students, faculty, staff and the public until Nov. 16. Students in the Food Production III class, an introduction to restaurant and buffet service, produce the lunches; dinners are the work of students in Food Production IV, one of the final classes that students take before completing an associates of applied science degree in Culinary Art. Cost is a suggested donation of $25 for dinner, $15 for lunch (however, “guests may donate as much or as little as preferred,” according to the website, tinyurl.com/y5txhebk, where you can find menus, place orders and make reservations). The money goes into a fund that assists culinary students with costs and fees associated when competing in culinary cooking competitions and culinary knowledge competitions. (Take your own bottle of wine, sign a waiver of liability and they’ll even “happily” uncork and pour it for you.)

Also at the culinary institute, dessert wizard Kelli Marks is offering a one-shot, beginner-level class on how to make dougnuts 6-9 p.m. Sept. 29, taking participants “through the process of making, proofing, frying and glazing. You’ll no longer be intimidated by yeast, shaping, or frying after this class.” And, Marks says, “You will leave with doughnuts. And the knowledge to make doughnuts.” Cost is $65. Get additional details and sign up at tinyurl.com/5n6rbekn.

Sunset Lodge at Rusty Tractor Vineyards, 10 Rusty Tractor Lane, Little Rock, hosts Oktoberfest at the Vineyard, noon-6 p.m. Sunday, featuring flights of German wine and beer, sausages and pretzels from Fassler Hall, a bloody Mary/mimosa bar (and a full bar as well), a costume contest (break out those lederhosen and dirndls) and music by Christine Demeo. Admission is free. Call (501) 916-2294.

St. Francis of Assisi Catholic Church, 33223 Arkansas 300, in the Pulaski County community of Little Italy, holds its 93rd annual spaghetti dinner, 11 a.m.-3 p.m. Oct. 2, serving spaghetti “topped with our famiglia’s special homemade meat sauce and cheese; sausage; insalata (salad greens with vinaigrette); garlic bread; and cookie” for $20 ($10 for kids 6-12, free for kids 5 and younger). There will also be a kids’ booth and bingo. Make reservations online only — tinyurl.com/3ueuv3zn — by Sept. 26.