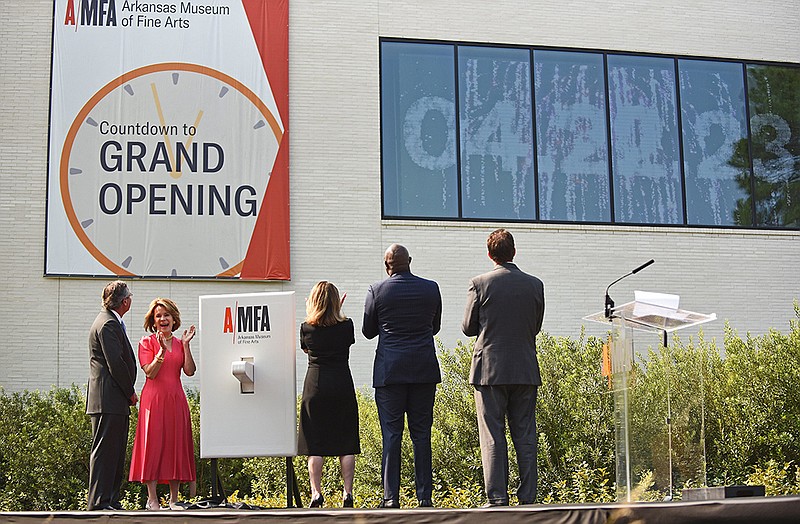 Harriet Stephens (second from left), an Arkansas Museum of Fine Arts Foundation board member, applauds the announcement of the grand opening date for the new building in Little Rock. More photos at arkansasonline.com/915amfa/. (Arkansas Democrat-Gazette/Staci Vandagriff)

The Arkansas Museum of Fine Arts will hold its grand opening April 22, 2023.

Museum officials, board members and Little Rock Mayor Frank Scott Jr. flipped a ceremonial switch Wednesday morning at the museum, West Ninth and Rock streets, to start the countdown clock, which is now visible through the 32-foot, second-floor "Art Perch" windows on the museum's northwest side overlooking West Ninth Street.

The opening date marks the end of a nearly three-year rebuild. Part of Wednesday's announcement took place in the museum's new north courtyard, in front of the once-and-future main entrance -- the original museum's 1937 Art Deco facade, built by artists of the Works Progress Administration, which architect Jeanne Gang of Chicago-based Studio Gang "rescued" and returned to prominence. The facade had been used as a separator between galleries inside the old building.

The opening had been postponed at least twice because of construction delays on the museum, in part incorporating and in part replacing what had been known since the early 1960s as the Arkansas Arts Center.

Harriet and Warren A. Stephens, co-chairs of the AMFA Capital Campaign, announced that the campaign had reached $150.4 million, surpassing its most recent goal, through what Warren Stephens, also the chairman of the AMFA Foundation, described as "an incredible outpouring of support." They have set a new goal of $155 million that would enable the museum endowment to help sustain the museum once it opens.

Harriet Stephens called the project, six years in the making and three years since it broke ground, "a magnificent new chapter for this institution" and praised the redesign as "awe-inspiring." That involves not just the museum's main building but 11 acres of newly landscaped grounds in Little Rock's MacArthur Park.

The new 133,000-square-foot building will house the museum's education facility, now named the Windgate Art School; galleries named for Harriet and Warren Stephens; the Governor Winthrop Rockefeller Lecture Hall (Rockefeller, who moved to Arkansas in the early 1950s and became governor in 1967, and his wife, Jeannette, were early supporters of the museum, spearheading the campaign that resulted in the expanded facility opening in 1963 as the Arkansas Arts Center); the Terri and Chuck Erwin Collections Research Center; the performing arts theater; and a modern restaurant.

The kick-start for the funding came from a $31,245,000 contribution from the City of Little Rock, proceeds from a voter-approved hotel-tax revenue bond.

Scott, citing the public-private fundraising partnership -- "the people of Little Rock, working together," he said -- praised the museum's 85 years in the city's MacArthur Park community, and described it as a place where "arts, education and culture collide" and called it "a beacon of light, a beacon of hope and a beacon toward the future of the capital city."

Museum Executive Director Victoria Ramirez said the museum in its new incarnation will continue to fulfill an ongoing mission, "to serve the people of Arkansas with an accessible and interactive showcase" for visual and performing arts and arts education. Museum officials have already moved into their new offices, she said.

Ramirez said she's not ready to reveal the inaugural exhibitions when the museum opens to the public, but promised "a couple of surprises."

She noted that for the first time there will be sufficient gallery space to display the museum's entire 14,000-object permanent collection -- works spanning seven centuries and including an internationally acclaimed trove of works on paper established by Townsend Wolfe, who became the Arts Center's director and chief curator in 1968. Wolfe retired in 2002 and died in 2017.

Much of the collection has been in storage and only occasionally, if that, rotated into the galleries. Those artworks will have been "newly cleaned and conserved" prior to their going on view, Ramirez said.

Admission, as it was at the Arts Center, will be free, she said.

The Fine Arts Club of Arkansas, founded in 1914, established the collection and gallery that would become the Museum of Fine Arts, which opened in MacArthur Park in 1937. 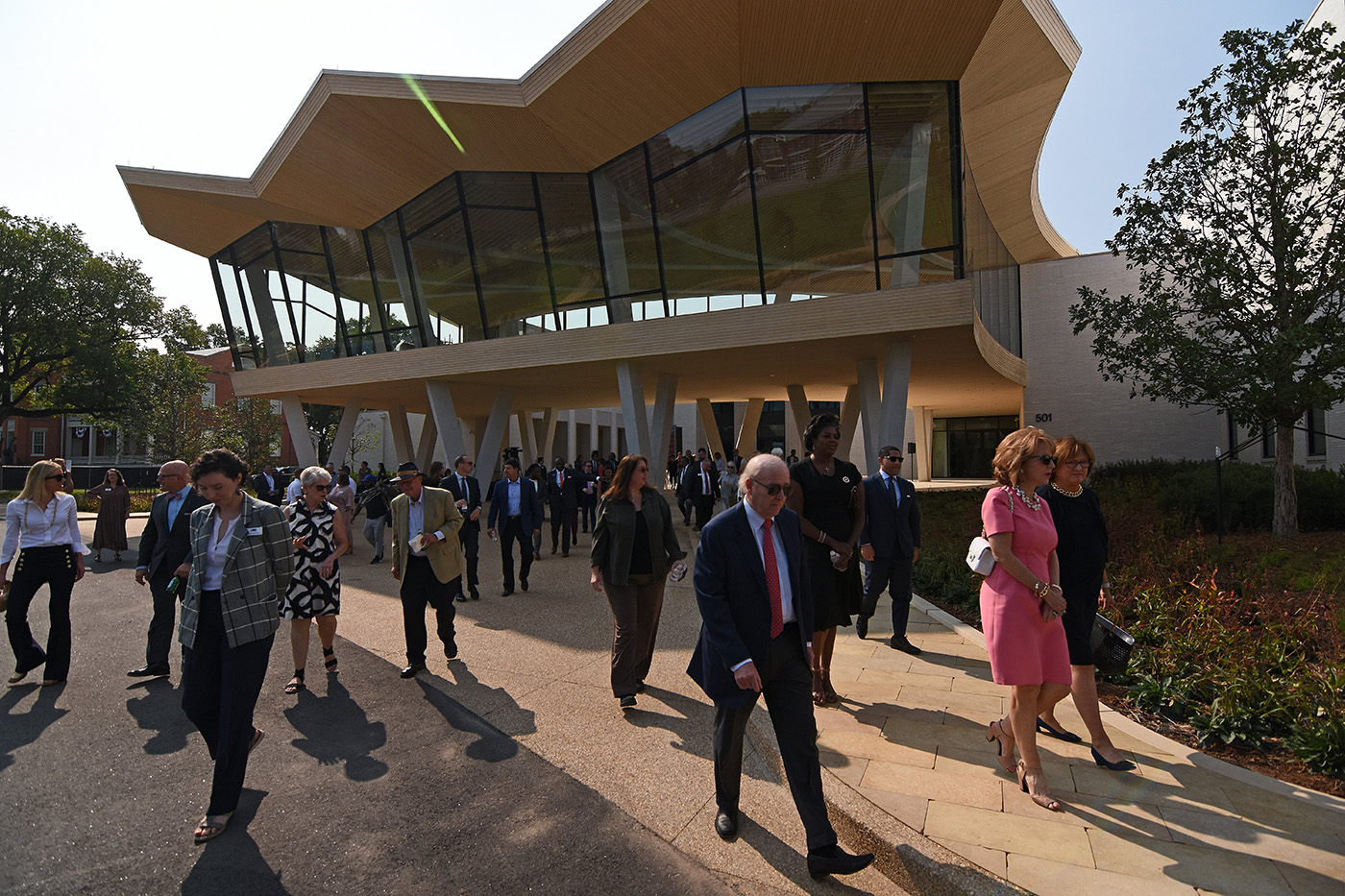 Attendees at the Arkansas Museum of Fine Arts announcement walk around the front of the new building Wednesday. (Arkansas Democrat-Gazette/Staci Vandagriff)

CORRECTION: Warren A. Stephens is the co-chair of the Arkansas Museum of Fine Arts Capital Campaign. A previous version of this story incorrectly identified him.