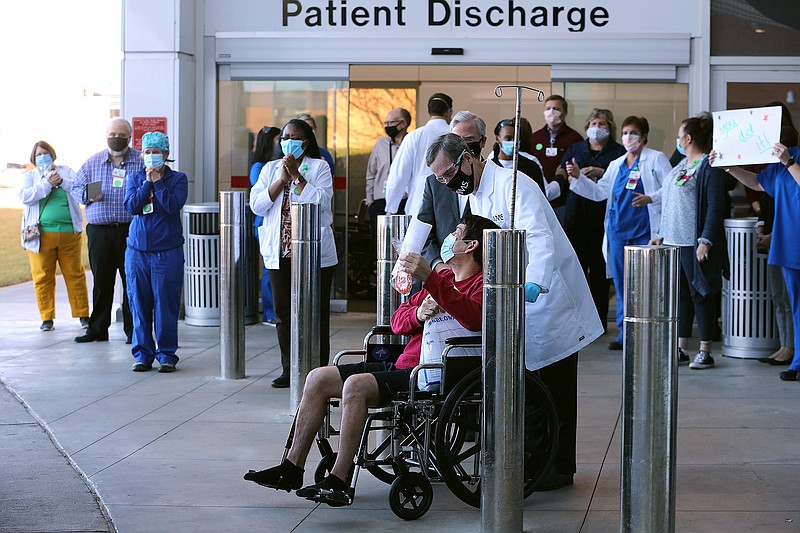 January 4, 2021 - UAMS discharges 1,000 coronavirus patient - - - Michael Kent of Sherwood is wheeled out of University of Arkansas for Medical Science by UAMS chancellor Cam Patterson as he is applauded by employees and staff on Monday, Jan. 4, 2021, in Little Rock. Kent, was the 1,000th Covid-19 patient to be discharged from UAMS. .(Arkansas Democrat-Gazette/Thomas Metthe)

A decline in Arkansas’ new coronavirus case numbers continued on Friday as the number of people hospitalized in the state with the virus fell for the second day in a row.The state’s death toll from the virus, as tracked by the Department of Health, rose by six, to 11,983.The state’s count of cases rose Friday by 660 — smaller by 185 than the increase on Thursday and by 488 than the one the previous Friday.It was the smallest daily increase in cases on a Friday since May 27 and the first one on a Friday since Aug. 19 that was below 1,000.Dropping for the third day in a row, the average daily increase in the state’s case count over a rolling seven-day period fell to 680, its lowest level since June 16.

With recoveries outpacing new cases, the number of cases in the state that were considered active fell by 360, to 8,857, the first time it has been below 9,000 since June 22.After falling by nine on Thursday, the number of covid-19 patients in the state’s hospitals fell Friday by 12, to 265, which was still above the two-month low of 258 that the number reached Monday.Also declining for the second day in a row was the number of the state’s virus patients who were in intensive care. That fell by five, to 44.The number on ventilators, which didn’t change Thursday, rose on Friday by two, to 18.