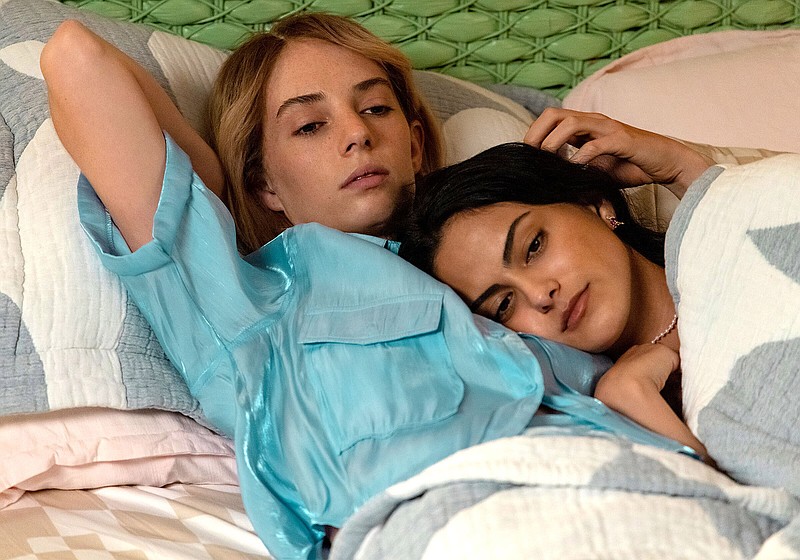 Perfect criminals: Maya Hawke and Camila Mendes play aggrieved schoolgirls who help each other out in the Netflix teen comedy “Do Revenge.”

It has been 18 years since Lindsey Lohan brought a savage social revenge to high school with the cult classic "Mean Girls," and now "Riverdale" star Camila Mendes is getting her chance to do the same with Netflix's newest black comedy, "Do Revenge."

The streaming giant has experience with black comedy, one of the most recent being 2020's "I Care a Lot." But this film is aimed at a younger audience of zoomers. "Do Revenge" is a worthy successor to "Mean Girls," and even "Fatal Attraction," regardless of the film being reportedly inspired by Hitchcock's "Strangers on a Train."

Mendes plays high school socialite Drea Torres who is at the top of her game, recently featured in a Teen Vogue piece and being thrown a wildly expensive birthday party by another one of her popular friends. Torres is the definition of a "prep," and she has bold plans to power through her senior year with perfect boyfriend Max (Austin Abrams) and move straight on to an Ivy League college.

That is, before Max leaks an explicit video she'd sent him, and Drea punches him in the face. She winds up a social pariah, with all her popular friends abandoning her over the summer break before her senior year.

It's there "Do Revenge" introduces "Stranger Things" star Maya Hawke as Eleanor, an awkward and gay transfer student who suddenly finds herself attending the same school as her nemesis, a mean girl named Carissa (Ava Capri), who, years before at summer camp, falsely claimed that Eleanor had sexually assaulted her.

But with Drea on behavioral probation after punching Max and Eleanor fresh out of therapy, each desires revenge but knows they can't go at their enemies directly. Drea wants to punish the man who leaked her explicit video. Eleanor wants revenge on Carissa for branding her a sexual predator.

Fear of being accused of predatory behavior solely because of their sexual orientation is a legitimate, real life fear for lesbians and bisexuals. Talk about relatable narrative from screenwriters Jennifer Kaytin Robinson and Celeste Ballard; they handle Eleanor's queer story elements tastefully and with respect.

It's films like "Do Revenge" and "Anything's Possible" that show gay characters belong in mainstream movies, and they can be given compelling storylines, the same as their straight counterparts.

Since they can't seek revenge directly, Drea and Eleanor decide to go after each other's bullies. And it's clear from the start Drea is the brains (dubbed Revenge Mommy), while Eleanor is the secret weapon as a new girl nobody else knows who can infiltrate the class royalty and take Max down from the inside. As she does that, Drea gets close to Carissa to find her weaknesses.

"Do Revenge" has a wild number of twists and turns. The last third really flies off the handle and will have its audience members on the edge of their seats, not knowing where the story will go next. And, of course, some tropes are unavoidable. While Drea is working to take down Carissa, she develops feelings for the bully's best friend, Russ (Rish Shah). And while Eleanor works to take down Max, she gets a crush on his sister, Gabbi (Talia Ryder), who is just the coolest, most collected, confident lesbian.

While it's a fair description to call this movie "Mean Girls" 2.0, "Do Revenge" is a much darker film. The depths its story visits by the end, particularly with Eleanor's character, should catch everyone entirely off guard. And that kind of surprise depravity in what some might mistake for a high school rom-com is refreshing. The boldness this film demonstrates in going as far as it does should make it a surprise hit for Netflix, particularly with notable appearances from Sophie Turner and Sarah Michelle Gellar, the latter of which is just flawless in the few scenes she has.

The actors are wonderful, the story is sharp, and "Do Revenge" has much to offer even in areas one wouldn't expect such as its creative camera shots and character outfits. Alana Morshead handled the wardrobe and has an amazing eye for detail. Pastels were a popular fashion choice for everyone at this prestigious school, and that color palette sticks throughout the entire film, revealing a deep dedication to craft consistency.

"Do Revenge" deserves the cult following "Mean Girls" has almost two decades later. And it's available now on Netflix.