Gillespie stepping down as secretary of Arkansas Department of Human Services 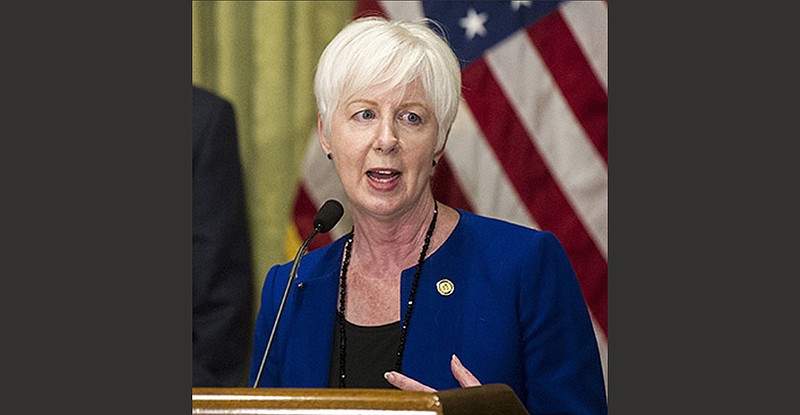 Cindy Gillespie is resigning as secretary of the Arkansas Department of Human Services after more than five years of service, Gov. Asa Hutchinson announced Thursday.

Hutchinson announced Thursday that Gillespie's last day will be Oct. 7. The governor said he will announce a successor to Gillespie at a later date.

"Cindy Gillespie has given the state of Arkansas her experience, management capabilities and the right ideas that have led us in a great direction," Hutchinson said in a news release. "She is a great friend, and she is truly passionate about making a difference in the lives of Arkansans every day."

Gillespie, 64, said she is leaving to focus on her family.

"Although it is bittersweet to leave, I appreciate the governor understanding that family must always come first, so I will need to depart in October," she said in the news release.

Gillespie joined the department in 2016, and over the past few years has worked on the Medicaid backlog in the midst of a pandemic.

The department has an annual budget of $10.6 billion and 7,381 positions, according to department spokesman Gavin Lesnick. Currently it employs 6,610. The annual salary for the department secretary position is $287,042.08, Lesnick said.

"When Governor Hutchinson offered me the role leading the Arkansas Department of Human Services, I could not have imagined all that would happen in the coming years, nor did I realize how quickly Arkansas would become my home and the employees at DHS become my family," Gillespie said. "The last six years have been the most challenging and rewarding of my career, and I am extraordinarily proud of all the incredible DHS team has accomplished over these years.

"'We care, we act, we change lives' is more than a motto at DHS. It's truly the mission my co-workers live each day as they go to work in our facilities, our offices and in the homes of families and individuals in need."

Rep. Jack Ladyman, who serves as chairman of the House Public Health, Welfare & Labor Committee, said Gillespie did a good job as head of Human Services. He said Gillespie's work with the waiver system for the state's Medicaid expansion program known as ARHome, which provides health insurance coverage to more than 300,000 low-income Arkansans, should be commended.

"Since she has been here our numbers have gotten better when it comes to public health," Ladyman said.

"Her innovation and collaboration with me for the ARHome program was incredibly important for our state," Irvin said in a text message.

"Her thoughtfulness in assessing programs and contracts based on a clear objective and return on investment was an example of good government," Irvin added.

Irvin said Gillespie's "compassion for all Arkansans through the many social programs under DHS, especially with the development of The Blue Umbrella, will always be fondly appreciated."

Before joining the Department of Human Services, Gillespie served as a principal in the Washington, D.C., office of Dentons' Public Policy and Regulation practice and a leader of the firm's Health Policy and Health Insurance Exchange Teams. Before that, Gillespie served as a senior adviser to former Massachusetts Gov. Mitt Romney, a 2012 presidential nominee. Gillespie led Massachusetts' interactions with the federal government and oversaw the development and implementation of the administration's executive branch initiatives, which included playing a leading role in the development of Massachusetts health reforms.

The health care plan would serve as the template for President Barack Obama's Affordable Care Act.

Gillespie, a native of Columbus, Ga., was recognized nationally and internationally for her leadership in developing a unique public-private partnership between federal, state and local government and the organizing committees for staging the Games in the United States.

Ladyman said he isn't sure who will take over the position temporarily before a new governor is elected in November, but said he has confidence there are people within the Department of Human Services who are capable of doing the job.

"My opinion on who should take over the position full time is that it's a decision for next governor," Ladyman told the Arkansas Democrat-Gazette. "I would like to have some input or consideration before the decision is made, but it's the decision of the governor and the executive branch."