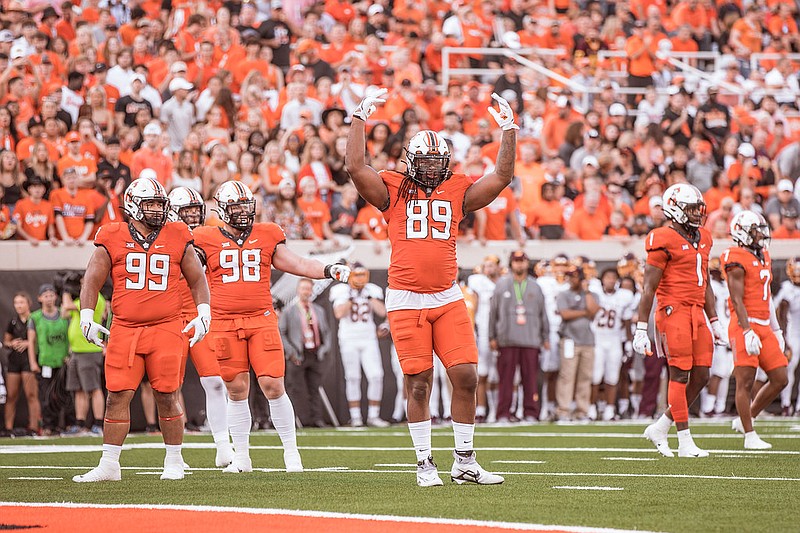 In his weekly press conference, Gundy only mentioned the importance of his No. 8-ranked OSU team (2-0) respecting the next opponent regardless of the level on which it competes. This Saturday, that would be the University of Arkansas at Pine Bluff (2-0), which will kick off against the Cowboys at 6 p.m. in Stillwater, Okla.

"They are averaging [62] points a game; sometimes that's hard to do when you're playing air," Gundy said Monday, two days after Oklahoma State beat Arizona State University 34-17 in Stillwater. "Our players are aware of that. They've got some guys that run around and make plays. We need to be held accountable for ourselves as individuals and our three units and then line up and go play hard. That's what I told them [Sunday]."

The last time the Cowboys played a team from the FCS (the lower of the two NCAA Division I subdivisions), they didn't have an easy time of it. They defeated Bobby Petrino's Missouri State University team 23-16 in last year's season opener and won five more games by eight or fewer points on their way to a Fiesta Bowl win over the University of Notre Dame.

Pittman, the University of Arkansas coach, cautioned the public of Missouri State's upset potential ahead of Petrino's return to Fayetteville on Saturday by referencing the Bears' close loss to the Cowboys. Pittman also gave Petrino credit for rebuilding the Razorbacks into a national contender more than a decade ago.

UAPB faced an eventual bowl winner last season in Arkansas, losing 45-3 in Little Rock, but stepping into Boone Pickens Stadium, Oklahoma State's on-campus scene of battle, could be a different beast. The Cowboys are ranked in the Associated Press top 10 and could welcome the Golden Lions with a near-sellout crowd after drawing 53,808 people to a season-opening win over Central Michigan University and 54,949 people to the Arizona State game.

"We got to watch the film," Oklahoma State offensive lineman Taylor Miterko said. "You got to prepare for them like you would for any other team. This week, we want to focus on us getting better and doing what we can do to play our best game. It doesn't matter who it is."

Oklahoma State is the first Division I opponent UAPB has taken on this season and will be the Lions' last nonconference opponent before starting Southwestern Athletic Conference play at Alcorn State University.

The Lions beat Division II Lane College 48-42 and put on a 76-3 rout of NAIA North American University. But in doing so, they lead the FCS in points per game and rank sixth in total yards per game at 531.5.

That might pose a test for the Oklahoma State defense, which has given up 450 total yards per game. That's 113th-best out of 131 teams in the Football Bowl Subdivision.

"In the first game, we left gaps open multiple times and turned guys loose in the red zone," Gundy said. "In coverage, we were much better. We still have a ways to go, but we were improved. I'm pleased with the improvements we've made from Week 1 to Week 2, but those improvements aren't to the point now that we can be successful for the remainder of the year. We need more improvements this week."

Oklahoma State's offense isn't too shabby, either. The Cowboys' 498 total yards per game rank 22nd in the FBS and their 46 points per game is tied for 16th with the University of Toledo. That'll prove a big challenge for the UAPB defense, which has given up 343 yards per game.

Cowboys quarterback Spencer Sanders has rushed for 111 yards and thrown for 674 yards and 6 touchdowns this season. Wide receiver Braydon Johnson has been his top target, catching 10 passes for 214 yards and a touchdown.

Defensive ends Tyler Lacy and Collin Oliver, each with 2 sacks on the season, could bring pressure to UAPB quarterback Skyler Perry. But with Black college All-American left tackle Mark Evans II leading the way, the UAPB offensive line may be able to protect their fifth-year starter and spring sophomore Kayvon Britten, who has four rushing touchdowns in 2022, free for another big game.

Oklahoma State is 24 miles northeast from Langston University, one of UAPB's historic archrivals. Langston leads the series with UAPB 20-15-1, but has not played the Golden Lions since 2019.

Langston's head coach earlier in the 2010s was Mickey Joseph, who was named interim head coach at the University of Nebraska earlier this week after the firing of Scott Frost. Nebraska and Oklahoma State are former Big Eight and Big 12 Conference rivals.

Nebraska is where Gundy's name has popped up as a potential candidate to succeed Frost, although he would leave his alma mater after 18 years on the job if he were to pursue the Big Ten program.

Oklahoma State is paying UAPB $425,000 for its first-ever meeting with the Golden Lions.