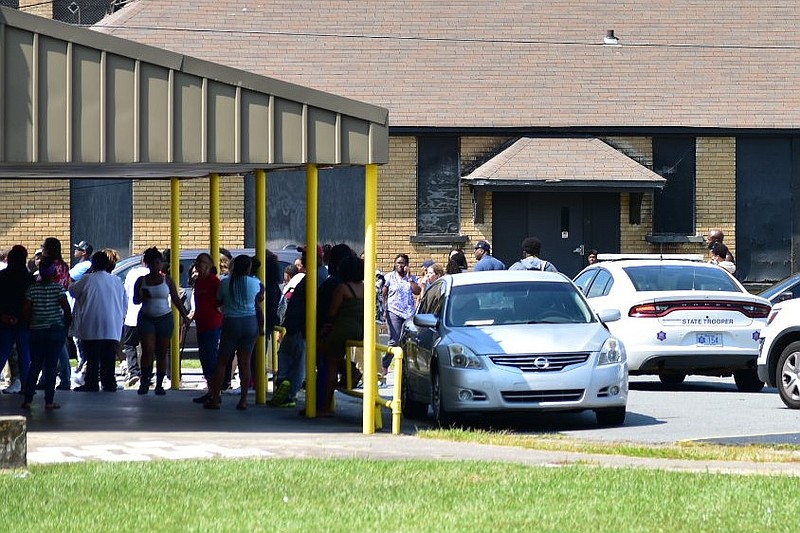 Watson Chapel Junior High students and guardians exit the front entrance of the campus in Pine Bluff on Friday, Sept. 16, 2022. The school released students early after a text message to 911 that authorities called a prank. (Pine Bluff Commercial/I.C. Murrell)

Units from the Pine Bluff and White Hall police departments, Jefferson County sheriff’s office and Arkansas State Police arrived at the junior high school in response to the alert, which was sent at about 11 a.m., Pine Bluff police Lt. David DeFoor said.

The text message to 911 indicated that a person was walking around and shooting a gun, DeFoor added.

“Everything that came from the junior high related to the text was a prank,” DeFoor said.

The Watson Chapel School District sent a text alert at 11:55 a.m. informing recipients of the lockdown. After noon, however, parents were seen checking their students out of the junior high campus.

The scene was cleared and school was dismissed at 1:30 p.m. “to ease the tension and stress of parents and students after the lengthy lockdown,” said Tom Wilson, the interim superintendent of the Watson Chapel School District.

DeFoor said the person responsible for the text will likely be charged with a felony count of creating a false alarm, adding that the text was an act of terrorism.

“You look at the faces on a lot of people, and they were very concerned until we talked to each person and told them what was going on,” DeFoor said.

A shooting on the Watson Chapel Junior High campus on March 1, 2021, killed freshman Daylon Burnett, 15. Classmate Thomas Quarles was found in a neighborhood near the campus and has been charged with capital murder.

The scene of cars lining Sulphur Springs Road, along with concerned parents and other adults standing along Camden Road across from the campuses, was reminiscent of that tragic day. The people waiting to get to their children appeared no less concerned for their safety after finding out that Friday’s text was a false alarm.

Brenda Smith, whose grandson attends the high school, arrived at Camden Road after she had seen a rumor on Facebook that two people were killed on campus.

“I just want him out,” Smith said. “I didn’t get the alert until all the cops got here.”

Laura Wright, the aunt of a student on campus, said the false alarm created mass confusion.

“I’m panicking,” Wright said. “I’m scared. It doesn’t look like a prank. My nephew isn’t calling or answering my call, and I don’t know if he’s been hurt.”

Edward Blundell’s daughter is a sophomore at the high school. Blundell said he was just leaving the house when his wife had seen a post on Facebook that someone heard active shooting at the junior high campus. Blundell then pulled into a driveway from Watson Chapel Baptist Church waiting to see if his daughter and others would be released early from campus.

“All I could think about was what happened last year [at Watson Chapel] and in Texas,” Blundell said, referring to the May 24 mass shooting at a Uvalde, Texas, elementary school.

Blundell said he doesn’t blame Watson Chapel schools for the prank, but he will consider transferring his daughter to another school. Wilson said the schools went through active shooter protocol as soon as personnel were notified of the 911 text.

“I send my daughter here to get an education, not to be worried about things like this,” Blundell said. “It’s not the school’s fault. It’s just the times we live in.”

This story has been updated. It was originally published at 1:59 p.m. under the headline "Prank 911 text results in false alarm at Watson Chapel Junior High; schools released early"