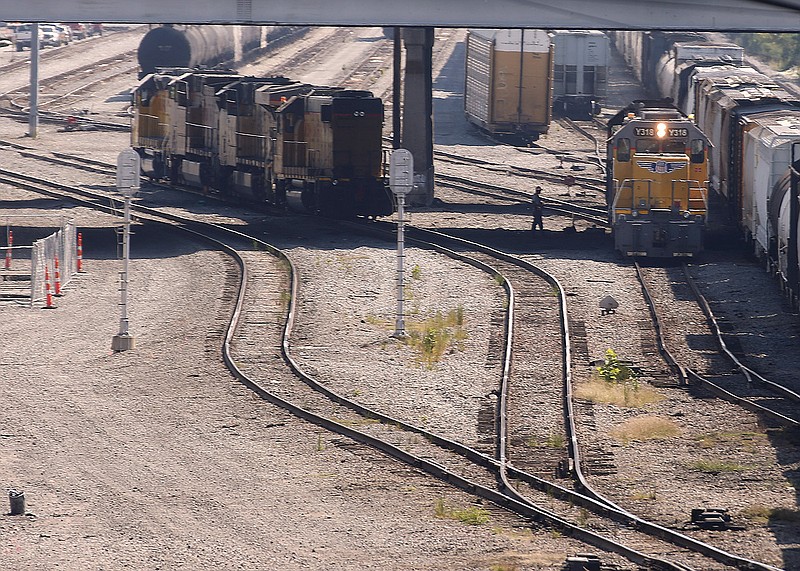 Trains move through the Union Pacific rail yard in North Little Rock on Thursday. Union Pacific officials praised the deal with rail workers in a statement, saying, “We look forward to the unions ratifying these agreements and working with employees as we focus on restoring supply chain fluidity.” (Arkansas Democrat-Gazette/Thomas Metthe)

Able to ditch eleventh hour contingency plans, freighters and commuters worked Thursday to reestablish rail itineraries after a dozen unions and major rail carriers reached a tentative, early morning deal to avert a strike that promised to shutter the transport of nearly a third of all goods shipped in the United States.

The breakthrough came less than a day before a 12:01 a.m. deadline today that, had a deal not been reached, would have allowed tens of thousands of union rail workers to strike. The tentative deal reached early Thursday followed all-night talks between the unions and industry leaders, brokered by the Biden administration.

In remarks Thursday at the White House, President Joe Biden hailed the agreement as a win for workers and companies alike, reflecting his effort this week to remain impartial in the talks as he tried to push the sides toward an agreement.

Biden has styled himself as the most pro-union president in history, but he avoided publicly taking sides. Biden portrayed the tentative deal Thursday as an achievement for all involved.

"This agreement is a big win for America," he said. "And this is a great deal for both sides, in my view."

Whether it ultimately prevents a strike remains to be seen. The deal now heads to union members for a ratification vote, which is standard procedure in labor talks. While the vote was being tallied, the workers have agreed not to strike.

While the agreement included compromise by both sides, workers ultimately won several of the concessions they were seeking, including better pay and more flexible schedules, including time off for medical appointments.

The deal overall was praised by freight companies and union leadership. It would increase worker wages by a total of 24% over five years, stretching back to 2020, including what industry groups said would be an average payout of $11,000 per worker upon ratification.

Crucially, unions won the right to take unpaid time off to attend medical appointments without penalty, one of several measures meant to ease the burdens of a scheduling system that workers said made it incredibly difficult for them to plan routine physician visits or vacations. Still, in a win for the companies, workers must take unpaid leave to attend those appointments.

Workers also won an additional day off and a guarantee that their health insurance premiums would not rise after the contract expires and union leaders and management negotiate a new one.

Two major unions -- the Brotherhood of Locomotive Engineers and Trainmen, and the Transportation Division of the International Association of Sheet Metal, Air, Rail and Transportation Workers, representing some 57,000 workers -- were among those holding up a previous deal largely based on recommendations made earlier this summer by Biden's Presidential Emergency Board.

Railroad unions had pointed to workload and attendance rules after the major railroads cut nearly one-third of their workforce -- some 45,000 jobs -- over the past six years.

The railroad industry has aggressively cut costs everywhere and shifted its operations to rely more on fewer, longer trains, which use fewer locomotives and fewer employees. The unions said the remaining workers, particularly engineers and conductors, were on call 24-7 because of the jobs cuts and could hardly take time off under strict attendance rules.

With a strike looming Wednesday, Norfolk Southern Corp. had said it planned to halt unit train shipments of bulk commodities Thursday. The railroad said it had already stopped accepting autos for transit at its facilities by Wednesday afternoon.

Representatives for BNSF Railway Co. and Union Pacific Corp. also signaled Wednesday that the companies were prepared to curtail rail service starting Thursday, ahead of a strike.

Food-supply chains were especially at risk as farmers gearing up for harvest need to get their high-demand product to consumers amid food shortages from Russia's war in Ukraine and global weather woes.

The Retail Industry Leaders Association said in a release Thursday that its members "endured enormous supply chain challenges over the last few years, and we are relieved that rail carriers and labor unions were able to reach a tentative agreement to avoid any further disruption.

"We look forward to the contracts being formally ratified, and we appreciate the Biden administration's commitment to ensuring America's railways remain open for business," the association said.

"We look forward to the unions ratifying these agreements and working with employees as we focus on restoring supply chain fluidity," the company said in a statement Thursday.

The Association of American Railroads estimated that a nationwide rail service interruption would have idled more than 7,000 trains daily and cost the economy more than $2 billion a day.

Nearly a third of U.S. freight moves by rail, second only to trucking, according to Union Pacific.

Ahead of the strike deadline, Amtrak had canceled several of its long-distance routes this week because there would not have been enough time for passengers to reach their destinations.

The work stoppage would have disrupted commuter traffic because Amtrak and other commuter train lines use tracks owned by the major freight railroads.

Amtrak had also suspended its California Zephyr and Empire Builder lines that run from Chicago to the West Coast, and said Wednesday that it would stop running its City of New Orleans, Starlight and Texas Eagle lines along with several others.

Amtrak said Thursday, after the tentative deal was reached, that it was reaching out to customers whose plans were disrupted and that it will accommodate them on the earliest available departures.

"Thank you also to our customers for their patience and understanding, and we look forward to welcoming them back on the rails starting today and tomorrow," Amtrak Chief Executive Officer Stephen Gardner said Thursday in a prepared statement.

Virginia Railway Express is one of many commuter rail systems that could have been forced to shut down Friday had freight workers gone on strike. It does not own its own tracks and relies on the freight rails.

VRE CEO Rich Dalton said word of the last-minute deal announced Thursday morning by Biden "is most welcome and should allow the Virginia Railway Express to serve commuters in the commonwealth without interruption."

Biden and his economic team had increasingly inserted themselves in the talks over the past week. The negotiations, brokered by Labor Secretary Marty Walsh, began Wednesday morning and lasted 20 hours.

Biden called in around 9 p.m. Wednesday, a person familiar with the talks said. Walsh called White House officials around 2 a.m. Thursday to say a deal appeared to be reached.

Talks had stalled over a push for companies to improve working conditions, including allowing workers to take unpaid leave to visit physicians. The agreement grants that ability, giving workers one additional paid day off and an ability to attend medical appointments without penalty, labor unions said.

"Most importantly, for the first time ever, the agreement provides our members with the ability to take time away from work to attend routine and preventive medical, as well as exemptions from attendance policies for hospitalizations and surgical procedures," the presidents of the Brotherhood of Locomotive Engineers and Trainmen and the Transportation Division of the International Association of Sheet Metal, Air, Rail and Transportation Workers said in a news release.

The unions' presidents, Jeremy Ferguson of the transportation division and Dennis Pierce of the engineers and trainmen, also said the deal will freeze workers' monthly health care contributions when it expires, ensuring those costs will not increase during the next round of contract negotiations.

The Association of American Railroads thanked the unions and Biden administration officials -- including Walsh, Transportation Secretary Pete Buttigieg and Agriculture Secretary Tom Vilsack -- for helping to bring the deal together.

Information for this article as contributed by Jim Tankersley of The New York Times, as well as Josh Funk, Josh Boak, Zeke Miller and Matthew Barakat of The Associated Press. 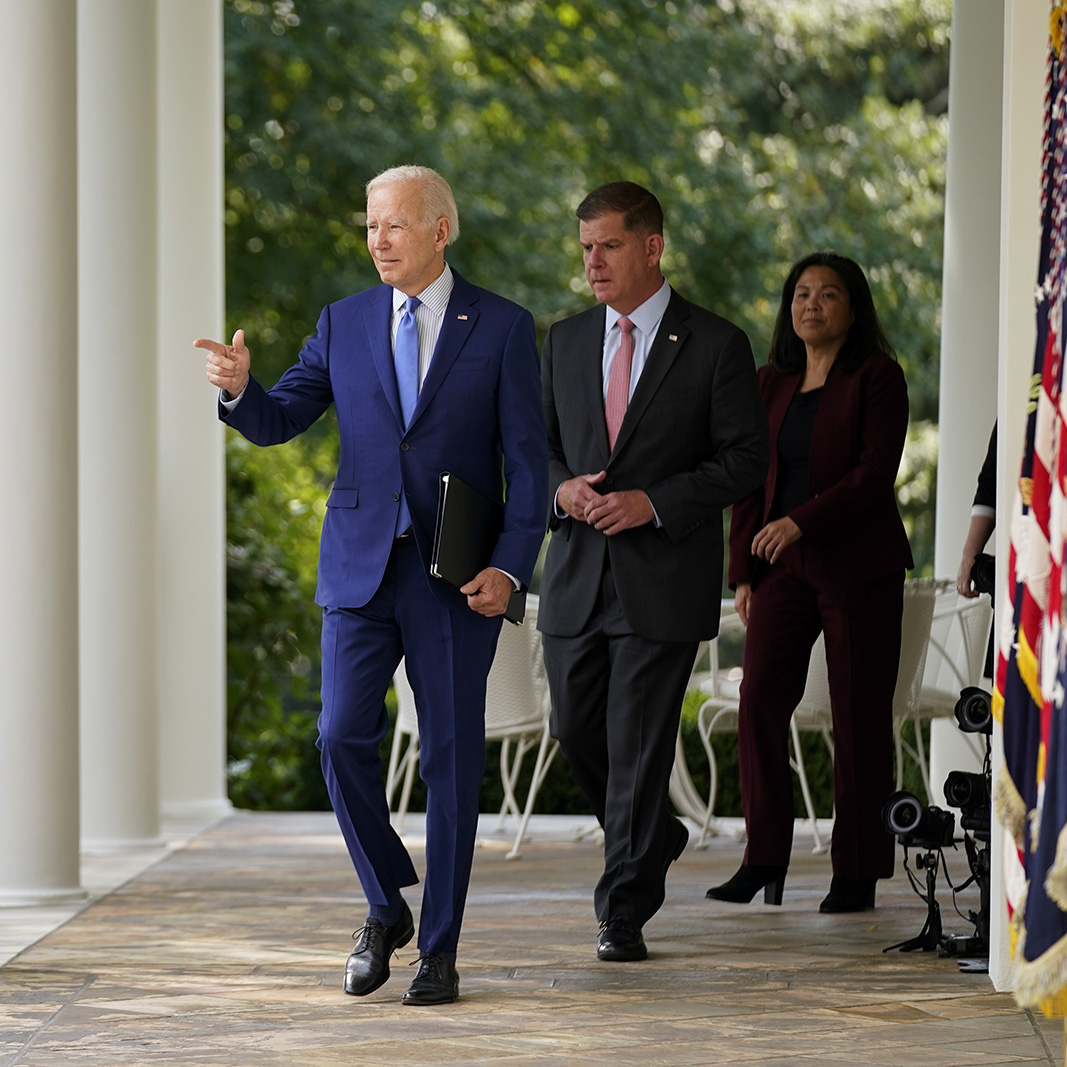 President Joe Biden arrives with Labor Secretary Marty Walsh and Deputy Labor Secretary Julie Su in the Rose Garden of the White House to speak about the tentative railway labor pact. “This agreement is a big win for America,” Biden said. (AP/Andrew Harnik)