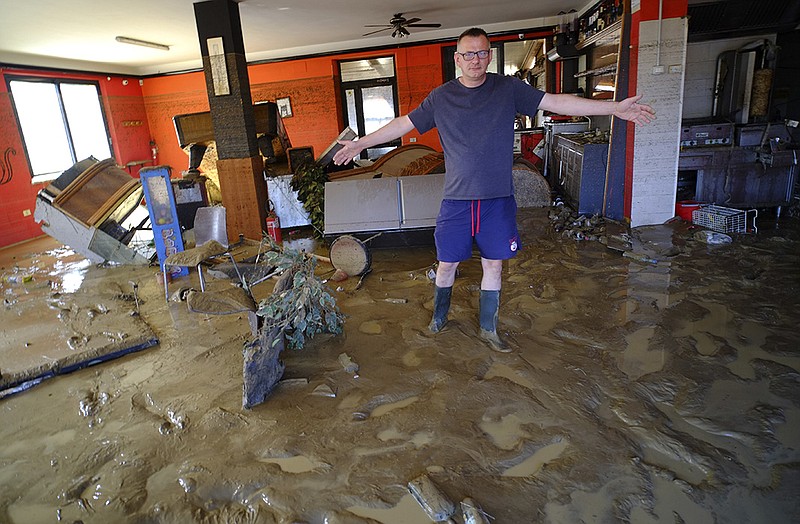 A man shows the damage to his bar Friday in Pianello di Ostra in central Italy after flash flooding swept through several towns in the hilly region, leaving at least 10 people dead and at least four others missing. A meteorologist said the amount of rain over a four-hour period was the most in centuries for the area. More photos at arkansasonline.com/917italy/. (AP/Bobo Antic)

A mother and daughter were missing after trying to escape the floods, Pasqualini told the Italian news agency ANSA. Elsewhere in town, a boy was swept away from the arms of his mother, who was rescued.

Premier Mario Draghi told a news conference in Rome that 10 people were dead and four were missing in the flash floods. He thanked rescuers “for their professionalism, dedication and courage.” Officials said some 50 people were treated at hospitals for injuries.

Draghi planned Friday to tour some devastated towns. His government announced $5 million in aid to the Marche region.

“It was an extreme event, more than an exceptional one, climatologist Massimiliano Fazzini told Italian state TV. He said, based on his calculations, the amount of rain that fell, concentrated over four hours that included a heavy 15-minute period, was the most in centuries.

Hundreds of firefighters struggled Friday to remove toppled tree trunks and branches amid thick mud as they searched for people who could have been buried by debris. They waded through waist-high water in flooded streets, while others paddled in rubber dinghies to scoop up survivors.

In the town of Ostra, a father and his adult son were found dead in their building’s flooded garage where they had gone to try to get their car out, and another man who tried to remove his motorcycle from a garage also perished, state TV said. Elsewhere, a man was found dead in his car.

Hundreds of people fled or were evacuated from their homes until the premises could be checked for safety and mountains of mud cleared away.

Some of the worst flooding hit the town of Senigallia, where the River Misa overflowed its banks.

In the town of Cantiano, people shoveled mud from stores and homes and an excavating machine was deployed to clear the town square.