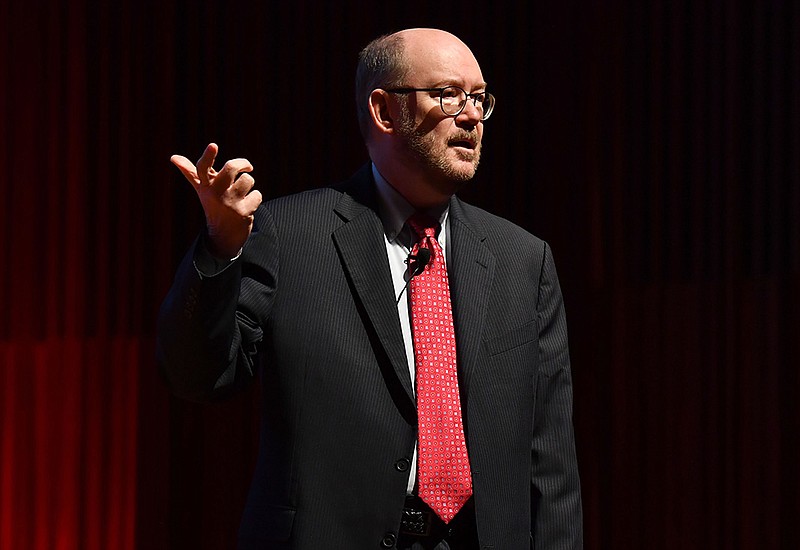 Dan Reed, a professor in the School of Computing at the University of Utah and candidate for the position of chancellor of the University of Arkansas, speaks Friday during a forum at the Faulkner Performing Arts Center on the university campus in Fayetteville. (NWA Democrat-Gazette/Andy Shupe)

Daniel A. Reed, one of four finalists for the University of Arkansas, Fayetteville chancellor post, talked about his roots during a campus forum Friday.

"As an Arkansas kid, I can't tell you how excited I am to be home," Reed said, adding that, if selected as the new chancellor, "it would be the honor of my life, the capstone of my professional career."

Raised in small, rural Mammoth Spring, Reed said education "transformed my life, and that is what I want for everybody else." Reed is a presidential professor of electrical and computer engineering at the University of Utah.

A 1974 visit to the UA-Fayetteville campus "changed the course of my life, because I learned to program," he said.

At universities -- particularly land-grant universities like UA-Fayetteville -- "we help uplift students, and I want that for every child of this state," said Reed, who earned a bachelor's degree in computer science at Missouri University of Science and Technology and a master's and Ph.D. in computer science at Purdue University in Indiana. "We hold in our hands the hopes of parents and dreams of students," said Reed.

Land-grant universities are "meant to go out and help people," and that mission has never been more critical, Reed said. "We are not only the University of Arkansas, but the university for Arkansas. Whoever and wherever you are, we are committed to you."

"College is out of reach for a lot of folks [due to cost], and that is a moral hazard, [because] education is the only thing I know that lifts people out of one socioeconomic class to another in one generation," he said. "When we deprive people of that opportunity, we have failed."

Reed's visit to campus Friday included meeting with students, faculty, staff and university stakeholders, as well as the campus forum, and the same plan is being followed for each finalist.

Interim Chancellor Charles F. Robinson had his campus forum Monday. Jay T. Akridge, provost and executive vice president for academic affairs at Purdue University, had his Wednesday. Cynthia Y. Young, founding dean of the College of Sciences at Clemson University, who would be the first female chancellor of the University of Arkansas, Fayetteville, if selected, has her forum Monday.

More information on each finalist, as well as additional details regarding each candidate's public forum, is available on the chancellor search website at: https://chancellor.uark.edu/chancellor-search/.

Reed has been Utah's provost and senior vice president for academic affairs, and he helped launch the For Utah scholarship -- which diversified the student body and broadened access for first generation students -- and spearheaded the 1U4U cross-campus research initiative, according to the University of Arkansas System.

Previously, Reed was the university chair in computational science and bioinformatics and professor of computer science, electrical and computer engineering, and medicine at the University of Iowa, where he was vice president for research and economic development.

The For Utah scholarship "had a dramatic effect on diversity by opening doors to students who probably wouldn't have had a chance otherwise," and he also helped roll out the university's "near peer advisors" program, where recent graduates went into high schools to advise those students on college matters, he said. The program was "very effective" and is now used by colleges throughout the state, he said.

Universities must not only be accessible, but ensure "everyone is treated fairly and feels welcome, [and that] is an endless journey," he said. "Hiring [diverse] people and recruiting students is the easy part," but creating a "welcoming culture so they want to stay is the harder part."

It's a worthwhile goal, however, as "we'll educate our students better with a diverse faculty, and students will learn more from each other" when there's a diverse student body, Reed said. His grandfather advised him decades ago to meet people different from himself, because "you'll get a different perspective."

Among those to ask a question during the question-and-answer portion Friday at the Jim & Joyce Faulkner Performing Arts Center was freshman Matt Hughes, who wondered about balancing the university's growing enrollment -- the university set a new record this year -- with campus resources and services.

The University of Utah is likewise setting enrollment records, so Reed has seen that "there's always a bottleneck somewhere," he said. "Growth matters, but you need to do it thoughtfully, without [compromising] the quality of the experience."

Hughes, who is studying chemistry and is a member of the Honors College at UA, said he thinks the university will need to add staff and services for the growing student body or restrict enrollment, and he'd rather see the former than the latter.

"When you're waiting an hour at the food court for dinner, you see the challenges of growing enrollment," said Hughes.

If a university is intent on growing enrollment, it needs to plan -- and budget -- accordingly, Reed said. "You have to be prepared to allocate resources for those additional students."

Reed was the founding director of the Renaissance Computing Institute at the University of North Carolina at Chapel Hill, with joint faculty appointments at Duke and North Carolina State University, and he also served as chancellor's eminent professor and vice chancellor for information technology in Chapel Hill.

Before that, he was head of the Department of Computer Science at the University of Illinois at Urbana-Champaign as well as director of the National Center for Supercomputing Applications, according to UA-Fayetteville. He was also the corporate vice president for technology policy and extreme computing for Microsoft, where he focused extensively on cloud computing technology.

Though reluctant to leave academia, Reed said that Bill Gates, Microsoft's co-founder, and Steve Ballmer, then-CEO, "are pretty persuasive guys." He also learned in the private sector the value of being first in innovation, because then "everyone is chasing you, [rather than] you chasing them."

College students need to see and know what they're learning will change their lives, and faculty plays a key role, Reed said. All Reed asks of teachers is that they "are making a difference in the world." He also said that "the teachers who care you learn are the ones who make a difference."

Staff members also need to feel appreciated, because "they are the unsung heroes of any university and don't get the respect they deserve," he said. At Utah, Reed helped implement career paths across campus so workers could see career ladders, and the university raised the base salary for those employees.

He's also concerned about graduate students, as "one thing we don't do nearly enough is career support for graduate students," he said. "We need to remember most people go out into the 'real world,' not stay in academia."

If selected as chancellor, Reed vowed to "listen and build consensus."

"Anyone who comes in here and says, 'I know [what to do],' you should be very suspicious of them," he said. Reed said he will surround himself with staff who are willing to tell him "bad news" and when "he screwed up," because "it's all about humility."

For Hughes, Reed is the "favorite" of the three chancellor finalists he has seen thus far.

Reed "has that real-world experience" in the private sector and a "unique perspective," Hughes said. "He's great."

Reed shares a philosophy with Daniel Burnham -- the acclaimed architect, urban planner, and driving force behind the famed 1892-93 World's Columbian Exposition in Chicago -- who urged "make no little plans," and Reed said he has no "little plans" for UA-Fayetteville.

"The assets are all here, and this place is poised to break out," Reed said. "This place is on a roll. What we can conceive, we can do."