Bears looking for a turnaround 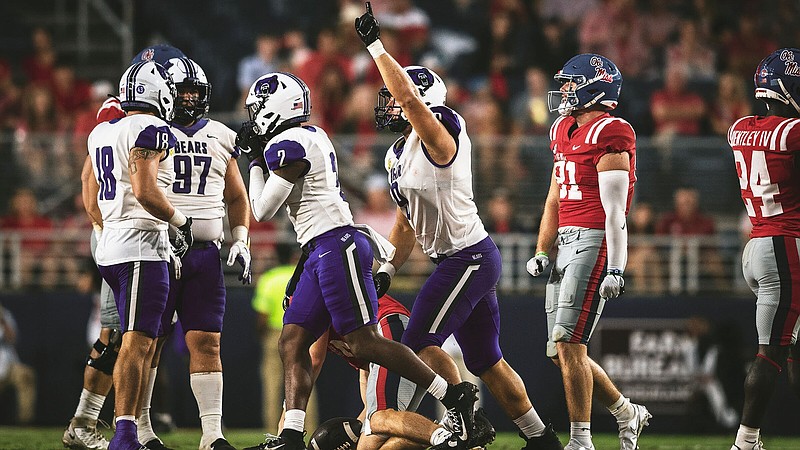 The Bears followed an opening loss to Missouri State with a 59-3 loss at Ole Miss last Saturday.

After the Bears fell behind early due to special teams miscues, the Rebels rode away to a convincing, albeit expected, win.

"It snowballed on us early and we couldn't tread water to make it a game after that," Brown said. "And I think our players realized that. We knew it was going to be a difficult task going in.

"Obviously, we wish the score would have been a little more indicative of a football game, but really, it's just brushing yourself off and going on to the next one."

Brown also said he isn't concerned about any lingering effect from last week's loss as his team turns its focus to today's game against Idaho State (0-2) at Pocatello, Idaho.

"Sometimes getting beat like that is easier to swallow than losing a close game," Brown said. "So in that sense, it's easy to turn the page and shift our focus to Idaho State, to a team that we match up with in a more even tone."

In the Bengals, Brown and the Bears face a team in a similar situation through two games.

Idaho State has opened with losses at UNLV (52-21) and last week at San Diego State (38-7) and are looking to end the skid against a fellow member of the NCAA Football Championship Subdivision.

"Idaho State is 0-2 as well, just like us," Brown said. "That can be a little deceiving --they've played two FBS opponents. They lost to UNLV in Week 1 and they lost to San Diego State, which was a 10-win team last year, on Saturday night. I thought they played San Diego State better than they played UNLV, so I think they improved from Week 1 to Week 2."

Brown said the Bears' season goals of making the postseason and challenging for the Atlantic Sun Conference title have not changed. He's also hoping a win in Idaho can be the start to a successful final nine games.

"It's a trip we're excited about making," Brown said. "The fruits of our labor are going to get rewarded soon, I truly believe that. I think we have a team that has a chance to be a very good team. We're not there yet, but we're working to get there. So I think you have to just taste it one time, get that taste in your mouth and see that ball start rolling and that confidence start going up."