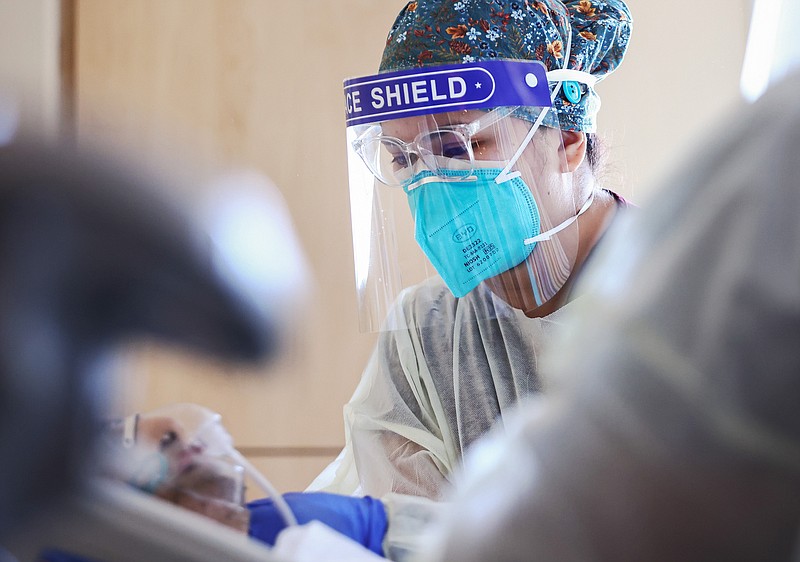 A decline in Arkansas' new coronavirus case numbers continued on Friday as the number of people hospitalized in the state with the virus fell for the second day in a row.

One of the deaths occurred in February, one was from March, three were from July, and one was from early August, she said.

The state's count of cases rose Friday by 660 -- smaller by 185 than the increase on Thursday and by 488 than the one the previous Friday.

"It's difficult to know why today's case number was small," McNeill said in an email.

"We are seeing cases continuing to decline, though, so today follows that trend."

Dropping for the third day in a row, the average daily increase in the state's case count over a rolling seven-day period fell to 680, its lowest level since June 16.

With recoveries outpacing new cases, the number of cases in the state that were considered active fell by 360, to 8,857, the first time it had been below 9,000 since June 22.

After dropping by nine on Thursday, the number of covid-19 patients in the state's hospitals fell Friday by 12, to 265, which was still above the two-month low of 258 reached on Monday.

Declining for the second day in a row, the number of the state's virus patients who were in intensive care fell by five, to 44.

The number on ventilators, which didn't change Thursday, rose Friday by two, to 18.

At its hospitals in Little Rock and Springdale, Arkansas Children's had 14 covid-19 patients on Friday, up from 13 on Thursday but down from 19 the previous Friday, spokeswoman Hilary DeMillo said.

Also on Friday, McNeill said Arkansas this week ordered and received an additional 21,600 doses of the Pfizer vaccine that was updated to target the original coronavirus strain as well as two strains of the omicron variant that are now responsible for most infections.

Additional doses of the Moderna vaccine aren't expected to be available until next week, McNeill said.

The U.S. Food and Drug Administration on Aug. 31 authorized both vaccines for use as booster doses for people who received their last booster or primary series dose at least two months earlier.

Providers had reported administering the boosters to 16,297 Arkansans as of Friday, up from 8,513 as of Tuesday, McNeill said.

CORRECTION: Arkansas' covid hospitalizations rose to 286 on Wednesday, then fell to 277 on Thursday before dropping to 265 on Friday, a second consecutive daily decline. An earlier version of this story's headline incorrectly stated the number of days in which hospitalizations had fallen.