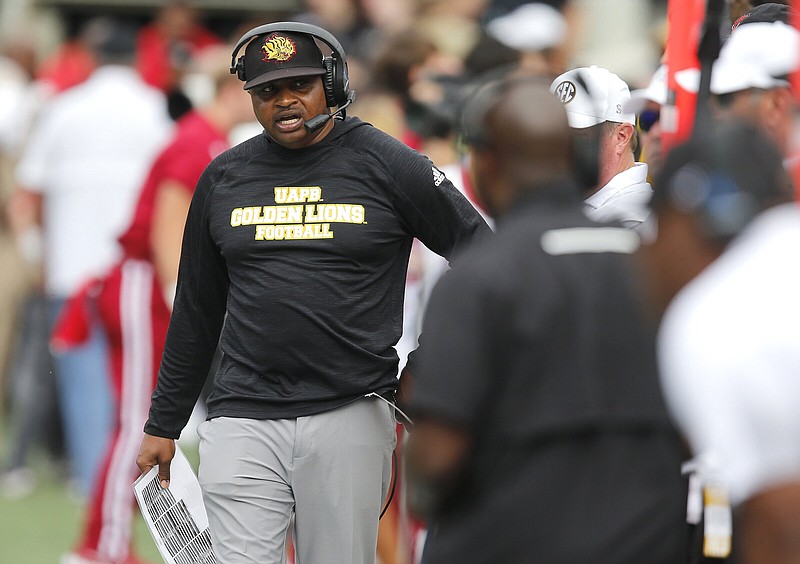 The Arkansas-Pine Bluff Golden Lions will shift from one competitive extreme to the other.

One week after its 76-3 home-field romp past the NAIA independent North American Stallions, UAPB (2-0) will play No. 8 Oklahoma State (2-0) tonight at Boone Pickens Stadium in Stillwater, Okla. Kickoff is scheduled for 6 p.m. Central.

Oklahoma State was the Big 12 Conference runner-up last season. It completed its 2021 campaign ranked No. 7 by the Associated Press with a 37-35 victory over Notre Dame in the Fiesta Bowl.

UAPB, a member of the NCAA FCS Southwestern Athletic Conference, opened this season with a 48-42 victory over NCAA Division II Lane College on Sept. 3. UAPB has averaged 62.0 points and 531.5 yards of total offense so far.

"We always respect whoever we play," Oklahoma State Coach Mike Gundy said. "We have talked about that in this culture for years here. They are averaging about 67 points a game. Sometimes that's hard to do when you're playing air, so our players are aware of that. [UAPB] has some guys who run around and make plays, so we need to be held accountable for ourselves and line up and play hard."

Oklahoma State's offense is led by the talent of mobile 6-1, 210-pound senior quarterback Spencer Sanders, who has passed and ran for respective averages of 327.0 and 55.0 yards per game.

"He's a dual threat," Gamble said. "They always do a good job of utilizing their strengths, and he's got some good guys around him."

Oklahoma State's running attack has been dominated by junior running back Dominic Richardson. He has carried 36 times for 192 yards and 2 touchdowns.

Senior quarterback Skyler Perry has led UAPB's offense through the first two games. He has completed 26 of 38 passes for 434 yards and 3 touchdowns with 1 interception.

"We have to stay ahead of the chains," Gamble said. "You can't stay behind the chains, can't shoot yourselves in the foot. We have to stay on track, stay on schedule so to speak. Your margin of error is very slim."

Perry completed 7 of 18 passes for 107 yards in UAPB's 45-3 loss to the University of Arkansas at War Memorial Stadium in Little Rock last season. He said that experience should benefit his and his teammate's performance against a team from a higher level on the road.

"We just have to stay focused," Perry said. "It's going to be a big scene. But as long as we go out there and play our game, stay tuned, and don't get lost in the crowd, walk in there with big eyes, we shouldn't get shell shocked on game day."

UAPB sophomore defensive back Kyle Knox, who returned a fumble 55 yards for a touchdown against North American, agreed with Perry.

Oklahoma State has opened with home-field victories of 58-44 over Central Michigan on Sept. 1 and 34-17 over Arizona State last Saturday. Gundy said the circumstance of today's game is clear.