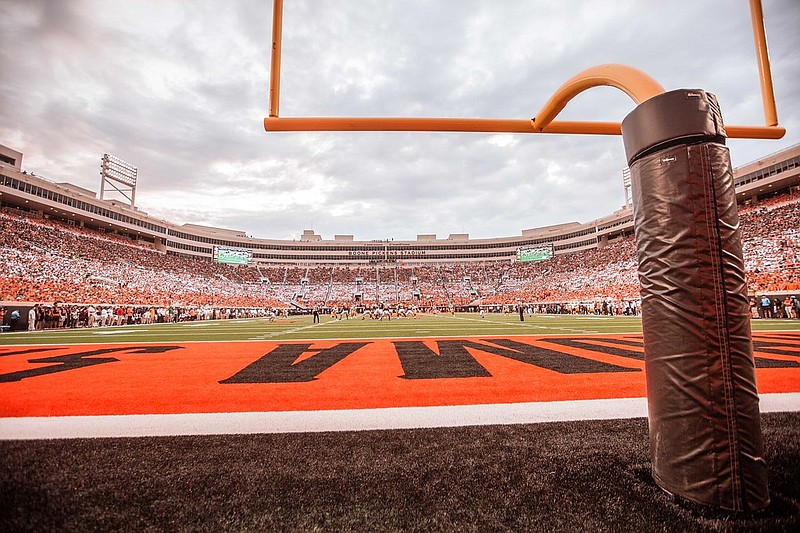 Boone Pickens Stadium in Stillwater, Okla., is unlike anything the University of Arkansas at Pine Bluff Golden Lions have seen in the past two years.

Named after the late oil magnate, the stadium includes 55,509 seats, nearly all of them packed into the lower bowl. It was remodeled in the late 2000s after Pickens made a $165 million donation to his alma mater Oklahoma State University, turning the former Lewis Field into a modern-day work of art. Skyboxes and suites surround the horseshoe-shaped stadium, which is closed off by an end zone building.

Sure, UAPB faced the University of Arkansas last October in Little Rock, but War Memorial Stadium is a different construction that's not as modern and well away from the Razorbacks' Fayetteville campus. The Golden Lions tonight will march under the bright lights of an on-campus Big 12 Conference venue to a deafening roar of a crowd cheering on the eighth-ranked team in the nation, never mind that the Golden Lions have to line up against one of college football's offensive juggernauts.

Both teams are 2-0 on the season, and UAPB and Oklahoma State will kick off at 6 p.m. on the subscription-based streaming service ESPN+.

"We always tell the guys, they got 85 scholarships and we've got 63, but we put on our pants the same way they do, one leg at a time," UAPB Coach Doc Gamble said. "As long as we don't get caught up into the letters -- whether it's Big 12, Big Ten, SEC -- and the facilities and all those things, you've got a chance. We've got to go play. I can always go back to last year when we played the Razorbacks, and at times we looked like the Power Five team at certain positions."

Power Five refers to the top five conferences in the NCAA Football Bowl Subdivision, in which each team can offer up to 85 scholarships: the Southeastern, Big Ten, Big 12, Atlantic Coast and Pac-12. UAPB is in its 26th year of competing in the Football Championship Subdivision, where each team can offer up to 63 scholarships but most of its conferences can send teams to a national championship playoff rather than a bowl game.

UAPB kicker Cristofer Thompson, an Alcorn State University transfer, will be among those getting their first taste of the Power Five limelight.

"From my position, nothing changes," he said. "A 40-yard field goal is still a 40-yard field goal on any field in the country. I've got to be locked in mentally, and I feel like we're there. As far as crowd size, playing at Jackson State last year is probably the closest thing to this."

The talk in northeast Oklahoma, however, has centered not only around Oklahoma State's ability to score, but also UAPB's ability as well. The Golden Lions are playing their first Division I opponent of the season, but their 62 points per game has caught the attention of a team that's averaged 46 in wins over Central Michigan and Arizona State.

"We've been good in each phase of it," Gamble said. "We're running the ball well, which we expect to do, and we're throwing it at a high percentage, which is always important for us. We're hitting on all cylinders, and that's going to happen when you have a veteran quarterback who's playing very well in a way he should be playing. We're playing good up front, and we're still coming along and starting to develop a good crew of receivers outside with a good stable of running backs."

If UAPB is to have any chance of hanging with Oklahoma State, the Lions will likely need fifth-year starter Skyler Perry to build on his 10-for-11, two-touchdown passing performance from last Saturday against North American University. Perry has completed 26 of 38 passes for 434 yards and three touchdowns this season, and backup Jalen Macon has also found a rhythm after completing 4 of 5 passes for 45 yards last week.

"It's a game, so you're going to come out and compete, no matter who's on the other side of the ball," Perry said.

There's also the matter of containing Oklahoma State's 498-yard per game offense on its home turf. Redshirt senior Spencer Sanders has thrown for six touchdowns and 674 yards on the season.

"They know how to put up points," Gamble said. "They have a lot of creativity, and they play at a fast pace as far as getting the ball snapped. For us, we have to be able to play at that speed and not be overwhelmed by the gameday environment. You've just got to show up and play."