Mad about muscadines: Wild grape perfect for cultivation in Arkansas 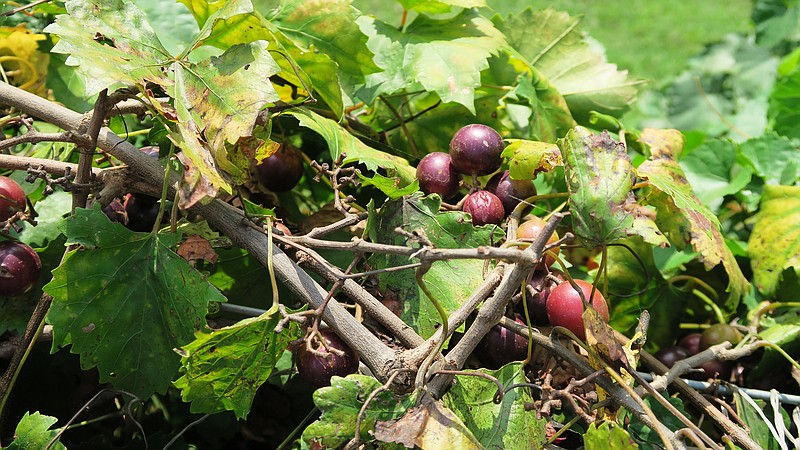 Chewy, sweet native muscadines with thick skin and several large seeds have been bred to create about 60 cultivars, some with thinner skins and some without seeds. (Special to the Democrat-Gazette/Janet B. Carson)

Late summer to early fall is muscadine season in the South.

Muscadines (Vitis rotundifolia) are a native grape and are known to have been cultivated by American Indians for hundreds of years.

They are not like the table grapes you find in the grocery store. Instead of growing in large clusters, muscadines are produced in small clusters of large, thick-skinned fruits with seeds.

Muscadines are the Southern grape, an easy vining crop to manage in the garden that can be grown as an ornamental edible or a stand-alone fruit crop. A true Southern delicacy, they are not hardy in areas that get colder than 10 degrees Fahrenheit (so they can get "nipped" in the northern tier of our state). And yet muscadines are much easier to grow than table grapes and rarely suffer from diseases or insects.

While muscadines are grown for fresh consumption, they are predominately used in making jelly, juice and wine. Fruit color can either be black or bronze.

Some gardeners refer to all muscadines as scuppernongs, but "Scuppernong" is the oldest cultivar of muscadines.

The thick skin of the fruit can be off-putting for some consumers, but it gives the grapes a natural resistance to insects and diseases that makes it much easier for a home gardener.

There can be an art to eating muscadines, and it can sometimes be intimidating to the uninitiated. That thick skin is much different from a normal grocery store grape. The skin is sweet and chewy, and there are usually at least two or three seeds inside. Most people spit out the skins and/or seeds; but some people eat the whole thing, even swallowing the seeds.

New varieties have been developed with thinner skins, and some new varieties are seedless.

While you can find muscadines growing in the wild, there are more than 60 varieties now to choose from for planting in your own garden. Some varieties are self-fruitful, while some require cross-pollination. There are varieties that produce perfect flowers (male and female parts in one flower), and some produce only female flowers, which require a pollinator.

If you grow female varieties, you do need at least one other variety with perfect flowers for every three female-only plants to achieve pollination.

Muscadines will produce best in full sun but will tolerate light shade.

A well-drained soil is critical. Muscadine plants will not tolerate standing water for even short periods of time.

The plants need some type of support — a trellis, fence or arbor to grow on — because once established they grow rapidly. While the vines can be used as an ornamental to shade or cover an arbor, for best production of fruit, they do benefit from annual pruning in late winter before new growth begins.

Muscadines are long-lived plants but will perform better if proper care is given.

Fertilize with a complete fertilizer as they begin growing in the spring and again in mid-June. Once they're established, you can fertilize once or twice a year depending on plant vigor and production. If the plants are too vigorous, you could end up with more foliage and less fruit.

From the first year and every year thereafter, pruning of your muscadine vines is important. Prune any time from mid-January until they begin to grow. Waiting as late as possible will help avoid winter damage, but later pruning can lead to more "bleeding" of sap since the sap begins actively rising in early spring.

There has been no evidence that bleeding hurts the plant, but it does worry gardeners.

If you grow your muscadines on a standard grape trellis, there will be one main trunk and two to four arms growing from that trunk. Growing on those arms will be smaller stems called "spurs" where the fruit is produced. Ideally, the spurs should be spaced out 6 to 8 inches along the arms; and the fruiting spurs should be cut back so there are three or four nodes (buds) per spur.

Also remove any excess growth coming from the soil line or the main trunk. If you are growing these muscadines on another sort of trellis or arbor, your vines might grow differently, but the spacing of the spurs and the length of the spurs you don't prune away should be the same as above.

If you don't prune, or you leave too many buds on the spurs, you will end up with more fruit, but the size and quality will be reduced.

Muscadine fruit ripens from late August through early October, depending on the variety and the weather that season.

The harvested-fruit will last for almost a week if blemish free — and refrigerated.

Not only are muscadines delicious, but they are nutritious as well, loaded with antioxidants. And they are an excellent source of dietary fiber.

You probably won't find them on the shelf at the grocery store, but you can find muscadines at farmers markets, and there are several you-pick growers in the state.