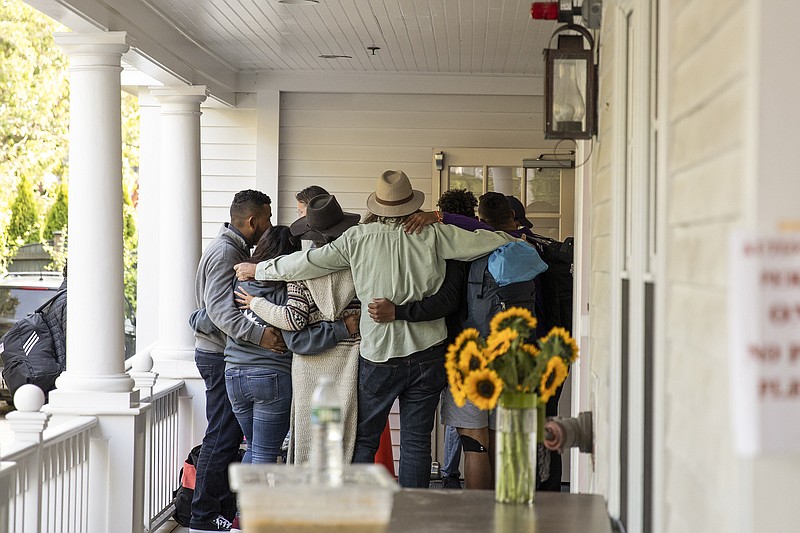 Migrant families bid farewell to volunteers Friday on Martha’s Vineyard in Edgartown, Mass., before boarding a bus that will take them to a ferry. (The New York Times/Matt Cosby)

EDGARTOWN, Mass. -- After two full days of sheltering in a Martha's Vineyard Episcopalian parish, a group of traveling migrants from Venezuela was bused Friday and ferried off the Massachusetts island.

Amid teary-eyed farewell hugs, volunteers who had worked around the clock to provide shelter, food, clothing and other basic necessities to the 48 migrants waved goodbye as they loaded onto buses. Staff at the St. Andrews Episcopalian Church in Edgartown told reporters the busing was voluntary.

"My heart breaks for them because they were not the first priority," said Lisa Belcastro, one of the volunteers at St. Andrews. "They're in my heart forever."

Domingo Cruz, president of the League of United Latin American Citizens, met with the migrants Friday morning before they left.

The families were being taken to the island's Steamship Authority Vineyard Haven terminal, where they left for Joint Base Cape Cod, a Massachusetts National Guard facility, attorneys said. The base is about 60 miles from Boston and Providence, R.I.

From there, Cruz said attorneys and state officials would arrange to help them find accommodations in Massachusetts or out of state. Many of them say they are headed to Florida cities, Cruz said, where they have friends or family.

"The irony is that Governor [Ron] DeSantis paid for them to be brought here," Cruz said.

Republican Gov. Charlie Baker said he would activate up to 125 National Guard members to assist the Massachusetts Emergency Management Agency.

DeSantis took from the playbook of a fellow Republican, Texas Gov. Greg Abbott, by surprising Democratic strongholds with large influxes of migrants and providing little or no information.

The Florida governor said Friday that most migrants intended to come to Florida and the trip to Martha's Vineyard was voluntary. He did not address the migrants' claims that they were told they were going elsewhere.

DeSantis defended picking up migrants in Texas and vowed to continue transportation to immigrant-friendly "sanctuary" jurisdictions.

Attorney Ivan Espinoza-Madrigal said it's still unclear how long they will stay in Cape Cod, how many migrants will stay in Boston and how many will relocate. The focus, he said, now turns to developing immigration cases for each of the migrants, as well as evaluating additional litigation they may want to file against parties responsible for their deception.

Rachel Self, a Boston immigration attorney who was conducting in-depth interviews with the migrants about their situations, claimed Thursday that agents with the U.S. Department of Homeland Security had likely falsified the addresses of some of the migrants in their paperwork.

An unsigned letter told migrants to notify U.S. Citizenship and Immigration Services of address changes, though ICE is actually responsible for tracking migrants, Henriquez said. "This is terrible advice," he said.

Espinoza-Madrigal said a "significant number" of the migrants experienced this situation, while others had addresses that reflected where they expected to settle.

"Many of the people who had those experiences were not asked if they were fleeing" by federal immigration officials, Espinoza-Madrigal said. "There was just no inquiry and no consultation."

"It seems like there are breaches in protocol that need to be investigated further. There seem to be anomalies in the immigration paperwork that the families were provided by government officials and it raises a strong possibility of collusion between border officials and state actors," he added.

Many immigrants have appointments Monday with ICE in San Antonio. Others were ordered to report to immigration authorities in two weeks to three months in cities including Philadelphia and Washington.

Missing them could jeopardize their chances of staying in the country.

In San Antonio, a Latina woman approached migrants at a city-run shelter and put them up at a nearby hotel, where she visited daily with food and gift cards, Henriquez said. She promised jobs and three months of housing in Washington, New York, Philadelphia and Boston.

The woman, who introduced herself to migrants as Perla, promised jobs, housing and support for their immigration cases, said Oren Sellstrom of Lawyers for Civil Rights, which offered free consultations.

"They were told that they would have a job and they would have housing," said Elizabeth Folcarelli, who leads Martha's Vineyard Community Services and described the scramble for shelter as a "huge challenge."

The city of San Antonio was unaware of the flights, said Maria Villagomez, deputy city manager.

Pedro Luis Torrelaba, 36, said he was promised work, food and housing. He thought he was going to New York.

"I am not a victim," he said Friday, expressing gratitude to the residents of Martha's Vineyard for their hospitality. "I simply feel misled because they told a lie and it has come to nothing." 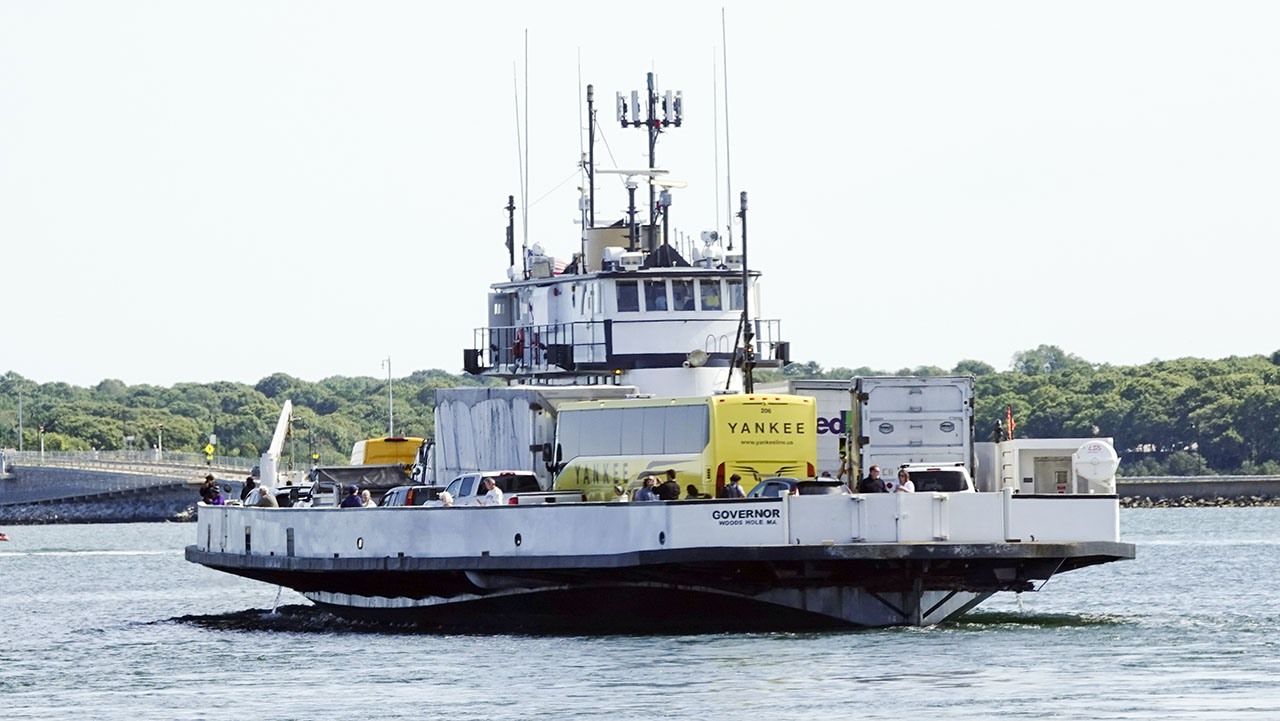 Immigrants leave Vineyard Haven, Mass., for Woods Hole, Mass., on Friday for a military base on nearby Cape Cod, where officials will help them find accommodations. (AP/Cape Cod Times/Ron Schloerb)