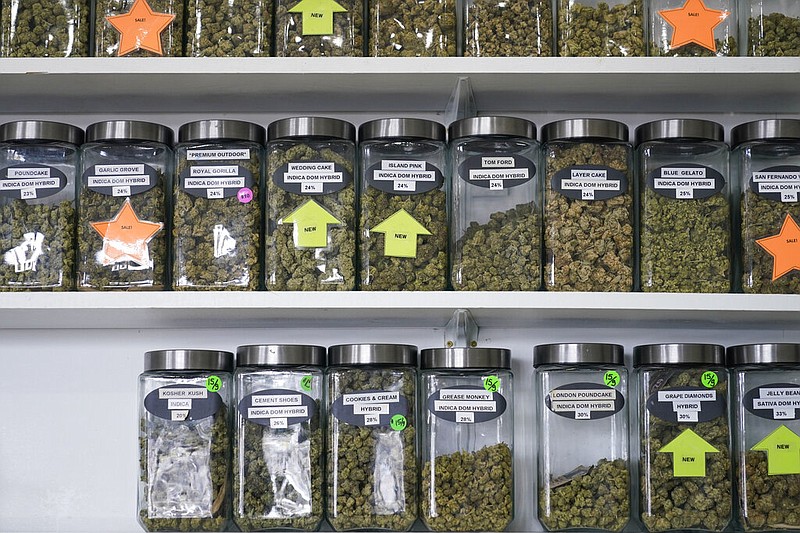 Recreational marijuana products are displayed at the Good Leaf Dispensary on the reservation that Mohawks call Akwesasne in St. Regis, N.Y., in this March 14, 2022 file photo. (AP/Seth Wenig)

Committees opposing a proposed constitutional amendment to legalize recreational marijuana received more than $1.8 million in donations in August, according to financial reports filed this week.

The ballot question committees are at the center of a campaign as to whether voters should approve a constitutional amendment to legalize recreational marijuana for adults. Whether the referendum stays on the November ballot is a question being considered by the Arkansas Supreme Court. Campaign finance reports from the committees for August were due Thursday.

Safe and Secure Communities, which opposes recreational marijuana, raised $1.75 million in August, with all of it from two donors. The group currently had $1.93 million in cash on hand as of its latest filing.

Safe and Secure Communities is based in Downers Grove, Ill., with the stated goal of educating the public about the consequences of legalizing marijuana for personal use, according to one of its filings. The group lists Michael McCauley as its treasurer. Safe and Secure Communities, along with Save Arkansas from Epidemic, have joined the legal case as third-party intervenors to keep the recreational marijuana question off the November ballot.

Ronald M. Cameron, chairman of Mountaire Corp., gave $1 million to Safe and Secure Communities in August. Cameron, a Republican Party donor from Little Rock, has donated a total of $1.25 million to Safe and Secure Communities. He has previously donated millions of dollars over the years to Republican candidates and GOP-affiliated political action committees.

Cameron also donated $78,600 to the Family Council Action Committee, which accounts for the entirety of the money the group raised in August. The group also is campaigning in favor of the proposed religious freedom amendment which, if approved, would prohibit the government from burdening an individual's religious liberty.

For the religious freedom amendment, the Family Council Action Committee raised $6,000 in August.

Illinois businessman Richard Uihlein, CEO of Uline, a distributor of shipping and packaging materials, donated $750,000 to Safe and Secure Communities in August.

Safe and Secure Communities spent $72,402 in August, the bulk of which -- $55,000 – went toward polling and research, according to its latest filing.

Pro-marijuana legalization group Responsible Growth Arkansas raised $605,000 in August, entirely from contributions made by medical cannabis businesses in Arkansas. The group is leading the legal effort to keep the recreational marijuana question on the ballot.

The group led a petition drive to put the recreational cannabis legalization question on the November ballot, but the Arkansas Board of Election Commissioners rejected it because it did not specify a limit on the amount THC that could be in edibles. Whether the issue will be on the ballot will likely be up to the state Supreme Court.

If allowed on the ballot, it would not be the first time Arkansas voters had a chance to weigh in on cannabis. In 2016, voters approved a constitutional amendment to legalize medical marijuana. The amendment limits the amount of THC, the main psychoactive compound in marijuana, to 10 milligrams in food or drink products that contain the drug.

In August, Responsible Growth Arkansas filed a lawsuit against the state to keep the referendum on the ballot.

Responsible Growth Arkansas is located in Little Rock and lists Eddie Armstrong as its chair and T.J. Boyle as its treasurer on its filing form. Armstrong is a former Democratic state representative and House minority leader and is CEO and chairman of the Cannabis Capital Group, a medical marijuana consulting firm.

The group has received a total of $4 million in contributions and had $499,952 in cash on hand, according to its latest filing. Responsible Growth Arkansas spent $187,296 in August with the biggest expenses going toward legal services and consulting.