The nation in brief: Justice asks to regain document access 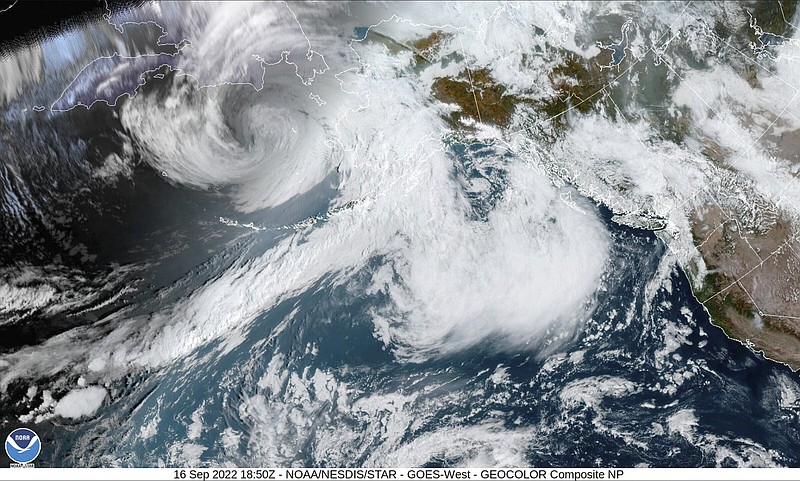 This image provided by the National Hurricane Center and Central Pacific Hurricane Center/National Oceanic and Atmospheric Administration shows a satellite view over Alaska on Friday. (AP/NOAA)

WASHINGTON -- The Justice Department asked an appeals court Friday to let the FBI regain access to about 100 sensitive documents taken from former President Donald Trump's Florida residence but did not try to block the appointment of an outside arbiter to review other materials.

In its filing, the department asked the appeals court not to submit the files marked as classified through the vetting process of the special master -- allowing the review of 11,000 other documents seized from Mar-a-Lago. The review has frozen the government's access to the material as it investigates Trump's handling of the documents.

The Justice Department asked Judge Aileen Cannon to stay the portion of her order that blocked it from full investigative use of the files with classification markings, but she refused to do so Thursday. That prompted law enforcement to ask the 11th U.S. Circuit Court of Appeals in Atlanta to do it instead.

MIAMI -- Tropical Storm Fiona passed near Guadeloupe Friday evening, hitting some of the Caribbean's easternmost islands with strong rain and wind as forecasters warned the storm could later threaten Puerto Rico and the Dominican Republic with dangerous rains.

The U.S. National Hurricane Center in Miami said Fiona was then likely to become a hurricane near the Bahamas next week.

The forcecast called for rainfall totals as much as a foot in places across eastern and southern Puerto Rico and 16 inches in the eastern Dominican Republic. That much rain may cause flash floods and mudslides in higher terrain, and life-threatening surf is possible as Fiona's winds blow ashore, the center said.

The Atlantic Hurricane season's sixth named storm was sustaining top winds of about 50 mph late Friday, the center said. Little change in strength is forecast over the next few days.

Fiona was moving westward at 15 mph, and was centered about 15 miles north-northwest of Guadeloupe. Tropical storm warnings were in effect for most of the Leeward Islands.

In the Pacific, Lester was expected to remain a tropical storm until hitting the Mexican coast today.

JACKSON, Miss. -- The airport worker who flew a stolen airplane erratically over north Mississippi and threatened to crash into a Walmart is now facing federal charges on top of state ones.

Before dawn Sept. 3, Patterson took a twin-engine Beechcraft King Air C90A from the airport in Tupelo, where he worked fueling airplanes, police said. He circled above unnerved Mississippians for five hours before ending the flight safely in a soybean field near Ripley, where police arrested him.

Patterson remains in custody, having been jailed on state charges of grand larceny and making terrorist threats.

Federal court records include a handwritten note from Patterson that an FBI agent testified he found in the plane. Patterson wrote that he was sick of living.

WASHINGTON -- A Michigan man was sentenced Friday to five years in federal prison for his role in the U.S. Capitol attack by a mob that disrupted Congress from certifying President Joe Biden's 2020 electoral victory.

Chief Judge Beryl Howell also sentenced Anthony Robert Williams, 47, of Southgate to three years of supervised release after his prison term and ordered him to pay $2,000 in restitution and a $5,000 fine, according to the U.S. Justice Department.

In June, a jury convicted Williams of a felony count of obstructing the Jan. 6, 2021, congressional session along with four misdemeanor offenses.

In a Facebook post three days after the riot, Williams called himself an "Operation Swamp Storm veteran" and referred to Jan. 6 as the "proudest day of my life." He added that it "felt like the founding fathers were smiling down on us in that room, and I guarantee my dad and gramps, both vets, would be proud."

"Williams' participation in the riot was purposeful, extensive, enthusiastic, and remorseless," prosecutors wrote in a court filing.

Only five Capitol riot defendants have been sentenced to a longer prison term.