PREP FOOTBALL: Harding Academy again too much for Booneville 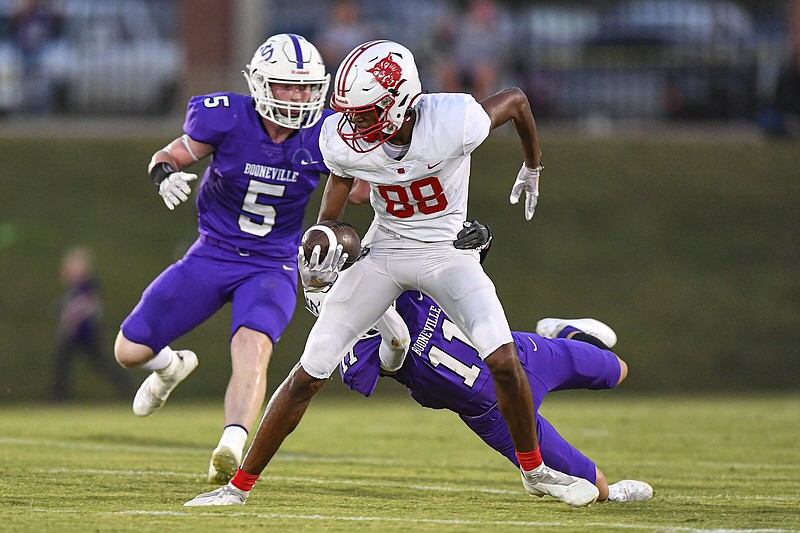 Endy McGalliard (88) of Harding Academy gains yards after a reception as Jace Washburn (11) and Dunn Daniel (5) of Booneville pursue Friday during the first quarter of the Wildcats’ 44-14 victory at Bearcat Stadium in Booneville. More photos at arkansasonline.com/917habhs/ (NWA Democrat-Gazette/Hank Layton)

BOONEVILLE -- Turning onto Eighth Street toward the football stadium, visitors to Booneville are greeted by a large wooden rocking chair decorated in purple and gold colors and with the words "It's fall, time to play ball."

Harding Academy is always ready to play ball in the fall and the Wildcats didn't quit Friday until they had secured a 44-14 victory over the Bearcats. Both teams now turn to conference play with Booneville beginning its 3A-1 Conference schedule at Hackett while Harding Academy returns home to face Stuttgart in 4A-2 action.

Booneville is well-aware of Harding Academy, the three-time defending champions in 3A who bumped up to Class 4A this year because of the Competitive Equity Factor for private schools. But Booneville, long a small-school power whether in 4A or 3A, wanted to play anyway, even after losing 56-27 to Harding Academy in the Class 3A semifinals last season.

"They're a really good team," Booneville coach Doc Crowley said of the Wildcats. "I have a lot of respect for those guys. But I know if we get to where we want to go, which is the next step to Little Rock, then we need to play teams like this."

That's just the way Booneville operates. But the Bearcats (2-1) had difficulty on Friday against the Wildcats (3-0), who will likely have no problem competing in a higher classification this season. Harding Academy throws the ball often and throws it well, even with a sophomore quarterback taking over this year for a graduated senior. Owen Miller was on target primarily with Kyler Hoover and Endy McGilliard, a 6-foot-4 sophomore who caught two touchdown passes in the first half to help the Wildcats to a 24-7 lead. After scoring on a 10-yard slant, McGilliard went up and over two defenders for a 38-yard touchdown to put the Wildcats ahead 14-0.

Harding Academy supposedly recruited him off the basketball court, which isn't surprising considering his length and jumping ability. But that was not the most impressive play of the night.

That happened when Booneville fans thought the Bearcats were going to get the ball back for a possession late in the second quarter. But instead of punting the football, Kyle Ferrie trotted onto the field and boomed a 55-yard field goal to put Harding Academy ahead 24-7. The kick was one yard short of the 56-yard field goal the Mississippi State commit booted earlier this season. He added a 42-yard field goal in the second half when Harding Academy pulled ahead 41-14 after a touchdown run by Miller and a 67-yard pass play from Miller to Hoover, who got well behind Booneville defenders.

So, Harding Academy appears loaded again for a deep run in the Class 4A state playoffs. But let's also credit Booneville, which takes the Tom Petty and the Heartbreakers approach to scheduling non-conference opponents: We won't back down.

Booneville has some quality playmakers, including rugged Dax Goff, who energized the home crowd with a 56-yard touchdown run in the second quarter. But the Bearcats have a lot of mistakes to clean up that forced them to play from behind from almost the start against Harding Academy.

"We've got 10 guys going both ways and we were gassed," Crowley said. "We've got the injury bug a little bit but that's no excuses. Our kids played hard and got after it."

Booneville will be OK. It was just too much Harding Academy, which got off the bus eager to play fall ball and left with its perfect record intact.

Print Headline: Wildcats again too much for Bearcats