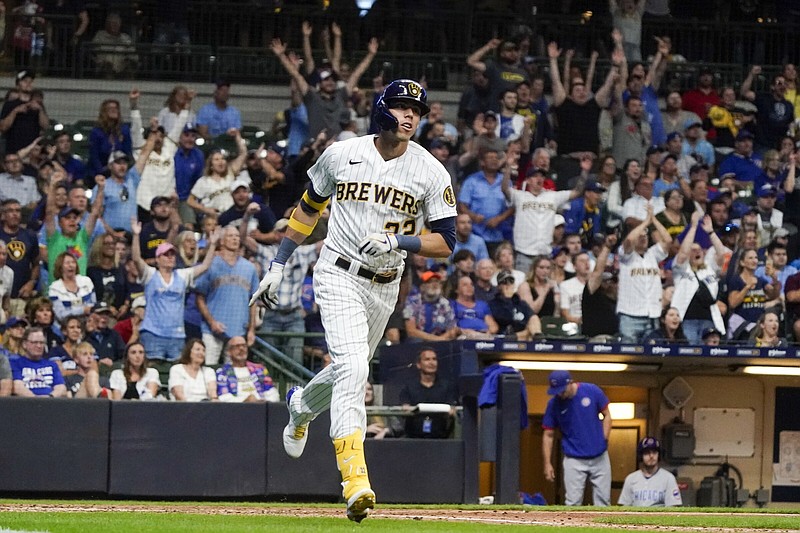 Christian Yelich of the Milwaukee Brewers became the first major leaguer to hit for the cycle twice in one season against the same team on this date in 2018. (AP/Morry Gash)

1912 Brooklyn's Casey Stengel makes his major league debut against the Pittsburgh Pirates, finishing with 4 singles, 2 RBI and 2 steals in a 7-3 win.

1920 Bobby Veach of the Detroit Tigers hit for the cycle in a 14-13, 12-inning win over the Boston Red Sox at Navin Field. Veach had six hits, achieving the cycle with a double in the ninth.

1930 Cleveland's Earl Averill drove in eight runs with three consecutive home runs to lead the Indians to a 13-7 victory over the Washington Senators in a doubleheader opener. Averill added another home run in the nightcap, setting an American League record with 11 RBI in a doubleheader.

1947 Jackie Robinson named Rookie of the Year by The Sporting News.

1968 Gaylord Perry of the San Francisco Giants pitched a no-hitter, a 1-0 victory over the St. Louis Cardinals and Bob Gibson. Ron Hunt homered for the only run.

1988 Jeff Reardon became the first pitcher to save 40 games in both leagues as the Minnesota Twins beat the Chicago White Sox 3-1. Reardon, who saved 42 games for the Montreal Expos in 1985, pitched the ninth inning for his 40th save in 47 opportunities.

1996 Hideo Nomo pitched a no-hitter against the Colorado Rockies, leading the Los Angeles Dodgers to a 9-0 victory. Nomo walked four batters and stuck out eight.

2004 San Francisco's Barry Bonds hit the 700th home run of his career, joining Babe Ruth (714) and Hank Aaron (755) as the only players to reach the milestone. Bonds connected in the third inning at home, a 392-foot solo shot to left-center. San Francisco beat San Diego 4-1.

2004 Seattle's Ichiro Suzuki broke Lloyd Waner's season record for singles with his 199th in a 6-3 win over Oakland. Suzuki's two hits gave him 235 for the season, 22 shy of the major league record set by George Sisler of the St. Louis Browns in 1920.

2018 Christian Yelich became the first major leaguer to hit for the cycle twice in one season against the same team, driving in four runs to lead the Milwaukee Brewers over the Cincinnati Reds 8-0.

Print Headline: This date in baseball