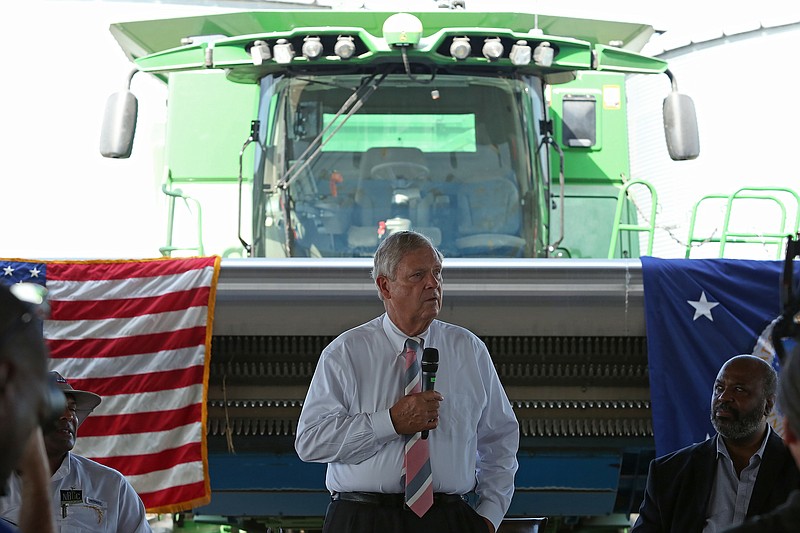 Funding for these programs is part of the Biden administration's Climate Smart Agriculture Initiative designed to support pilot programs that will help farmers transition to sustainable farming practices, establish new markets to create and grow revenue sources and to verify and report data that proves to consumers that crops were produced sustainably, Vilsack said.

"Farmers, ranchers, producers ... around this country fully understand and appreciate the challenges of climate change probably better than just about anybody on the planet," Vilsack said Friday during a visit to Isbell Farms in England.

"They also know that they have a responsibility which they take very seriously, and that responsibility is to be the stewards of our land and water," Vilsack said.

USA Rice Federation, Winrock International and Tyson Foods will take the lead on major contracts worth at least $160 million in total.

Those projects will be geared mostly toward rice production, a few other row crops and cattle and poultry.

Vilsack announced earlier this year the USDA had allocated $1 billion to its Partnerships for Climate-Smart Commodities program to be divided into two funding pools, but the Biden-Harris administration increased total funding to roughly $3.5 billion because of higher demand from applicants.

The USDA is investing up to $2.8 billion into 70 projects for the first funding pool to support 'climate-smart' projects; 20 of those projects are expected to affect Arkansas.

An estimated 50,000 farmers in the U.S. and Puerto Rico will take part in the programs, Vilsack said, and more than 55 million tons of carbon dioxide equivalent will be sequestered over the five-year terms of all 70 projects.

Proposals for the projects include plans to get matching funds up to 50% of federal investments on average from non-federal sources, the USDA release stated.

Funding for the program will come in two phases from the USDA's Commodity Credit Corp. Projects chosen for the second funding pool will be announced later this year.

USA Rice Federation will get $80 million for its Rice Stewardship Partnership for Climate-Smart Commodities project to help farmers adopt conservation practices that will reduce their water usage when growing rice and also help them try to reduce methane, a greenhouse gas emission.

"For this particular project, we're looking at 400,00 acres impacted, 25% that is earmarked specifically for historically underserved producers, and what that will do is to enable all of those producers to enable climate-smart practices," Isbell Farms partner and rice farmer Mark Isbell said.

"The Rice Federation project was the number one scored project of all of the various grant [proposals] that were submitted," Vilsack said.

Winrock is also working with Riceland Foods and Arva Intelligence, as well as the Intertribal Agriculture Council.

Springdale-based Tyson Foods Inc. will get $60 million to reduce greenhouse gas emissions and increase carbon sequestration in beef production and row crops for livestock feed like corn, and to provide technical assistance and incentive payments to small and underserved producers.

Tyson is working with Bayer; McDonald's; Scoular, an agriculture supply chain solutions company; Where Food Comes From, a third-party food verification company; Iowa Select, the eighth-largest pork producer in the United States; certain Native American Tribal communities; and the World Business Council for Sustainable Development, of which Tyson is a member.