Witnesses are back going door-to-door 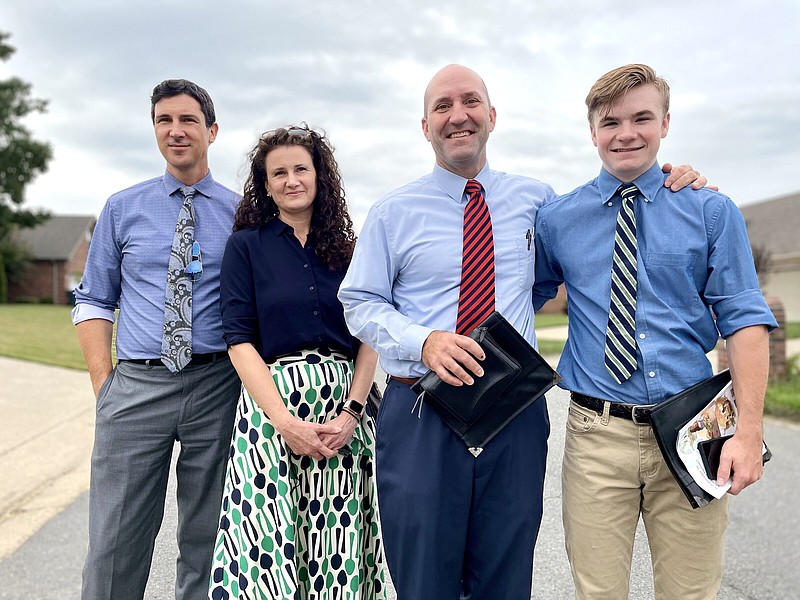 Jehovah’s Witnesses (from left) Brian Willis, Nicole Willis, Scott Smith and Shepherd Smith went door-to-door on Congressional Road in Little Rock on Sept. 1, the first day they’d been able to do so since March 2020. Due to covid, they had spent the past 30 months sharing their faith via telephone, emails and letters. (Arkansas Democrat-Gazette/Frank E. Lockwood)

After a lengthy, covid-19-related pause, Jehovah's Witnesses are again knocking on doors and passing out pamphlets.

In-person evangelism resumed at the start of the month, in Arkansas and around the world.

At the Kingdom Hall in Mabelvale, roughly 40 Witnesses bowed their heads briefly in prayer and then fanned out across the community, some of them carrying a tract titled "Enjoy Life Forever!" which included three introductory Bible lessons and a barcode that can be scanned to access videos, audio recordings and additional reading material.

The strong turnout, on a Thursday morning, didn't surprise Brian Willis of Alexander.

"Across the globe, you've got 8 million of Jehovah's Witnesses that haven't been door-to-door" since the start of the pandemic, he said.

The group included Willis, his wife, Nicole, and three Conway friends, Scott and Amy Smith and their son, Shepherd.

There's a lot of ground to cover. The Mabelvale congregation's territory includes 21,000 households -- roughly 115 for every congregant.

"If you were to go to one of our kingdom halls, you would see a map and the whole area would be divided into sections, and each section will be numbered," Amy Smith said.

"We just redid our congregation map because Conway grows. Conway's growing like crazy," she said.

On their first day out, the Smiths and Willises volunteered to visit a Little Rock neighborhood off of David O. Dodd Road, roughly a mile south of Colonel Glenn Road.

"We are incredibly nervous because it's been 30 months, but we're also excited," Scott Smith said.

Realizing that some people continue to have covid-19 concerns, he came prepared.

"I have a mask, just in case they're sensitive," he said.

Calling cards, left behind, enabled absent homeowners to reach out for additional information.

At the first 23 houses, only four people answered the doors, and none of them was interested in talking about Jesus, Jehovah or introductory Bible lessons.

All of the exchanges were cordial.

The Witnesses reject traditional Catholic and Protestant views about heaven, hell, the Trinity and the divinity of Christ.

They believe only 144,000 people "will be resurrected to heavenly life," while other good people will enjoy "everlasting life in perfection on a paradise earth."

Each baptized Witness is considered an ordained minister and a "publisher" of the gospel. (One of the definitions of "publish" is "to make widely known.")

Believing they are commanded, in Scripture, to share their faith with others, Witnesses have been going door-to-door since the late 19th century.

"We were known as International Bible Students back then," Scott Smith said.

From the beginning, "There was a an effort to imitate Christ's example and the apostles that went from house to house to share the gospel," he said. "That's just been a pattern of Jehovah's Witnesses for over 100 years."

It's a pattern that outlasted two world wars and the Great Depression.

It took a global pandemic to disrupt it.

Beginning in spring 2020, kingdom halls around the globe closed their doors. They did not open again, for worship services, until April.

Unable to witness face to face, Witnesses opted to write letters and make phone calls instead.

The encounters are usually brief and good-natured.

"Even if they're not interested, they're usually polite about it," Shepherd Smith said.

If a resident asks them not to stop by again, they try to make note of that and honor the person's wishes, Scott Smith said.

Nicole Willis said she welcomes the opportunity to witness.

"For the most part, it's really enjoyable," she said.

"I like the preaching part, but the part that I really enjoy is the teaching part," she said.

Preaching is simply "declaring the good news publicly," Witnesses believe. But a teacher "does more than proclaim; he explains, reasons with good argumentation, offers proofs, and persuades," church literature states.

"When someone allows you to come back and share with them things that you appreciate and you've learned from the Bible, that's a joy that you can't put into words," Willis said.