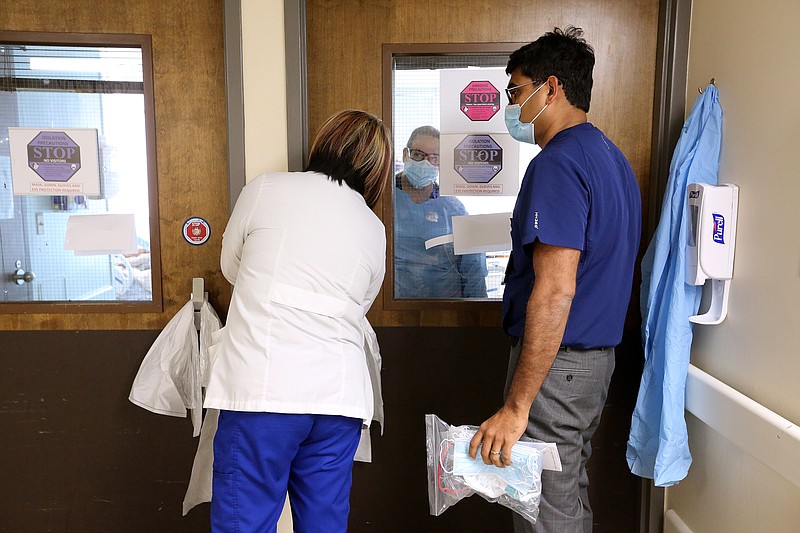 Nurse Kia Kandlbinder (left) and Dr. Ramakrishna Thotakura (right) talk through the door to fellow nurses about treatment of a Covid-19 patient in one of the Covid wards at University of Arkansas for Medical Science on Thursday, July 22, 2021, in Little Rock. .(Arkansas Democrat-Gazette/Thomas Metthe)

The number of new covid-19 cases reported to the state Saturday increased slightly compared to the day before, when the number of reported recoveries outpaced new cases, according to data from the Arkansas Department of Healthy.

There were 665 new cases of the virus Saturday, data showed, slightly topping the unusual 660 new cases reported the day before.

Recoveries were not able to pass the number of new cases for a second day in a row, however, bringing the number of active cases up by 104, to 8,961 at the week's end.

The number of deaths reported from the virus increased by 10 on Saturday, bringing the total death toll in the state to 11,993.

A day before, 12 deaths were reported, but an ADH spokeswoman said those dozen deaths had happened more than a month earlier. It was unclear if the deaths reported Saturday were also from that backlog.

The number of Arkansans hospitalized with the virus continued to fall, with one less person being treated in a hospital Friday than the day before and two fewer in intensive care units. In total, 264 Arkansans were hospitalized Saturday and 42 were in ICUs across the state.

Also Friday, 1,664,359 Arkansans had been fully vaccinated, representing 58% of the state's population over age 5. A further 836,430 people had received a third booster dose.