Cardinals hold Reds to one run in doubleheader 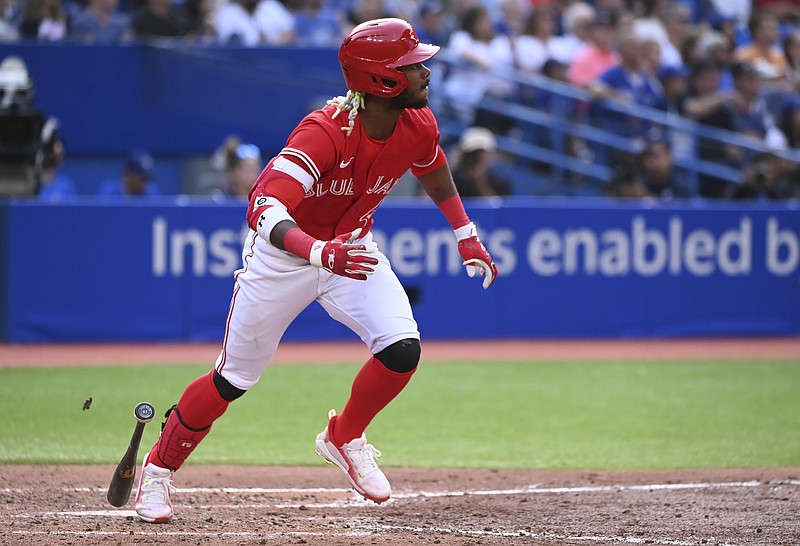 ST. LOUIS -- Yadier Molina hit a two-run drive while Albert Pujols went hitless in his quest for 700 home runs, and the St. Louis Cardinals beat the Cincinnati Reds 5-1 on Saturday in the first game of a doubleheader.

Andrew Knizner scored on a throwing error by Reds center fielder Nick Senzel, who was playing third base in a five-man infield in the 11th inning, to give St. Louis the doubleheader sweep 1-0.

Pujols started at first base and hit second in the opener for the first time this season. He went 0 for 3 with two walks in his first two plate appearances. The sold-out crowd of 46,678 loudly booed both walks.

St. Louis Manager Oliver Marmol said playing Pujols so frequently is a no-brainer despite his age of 42.

"When you put a winning lineup out there, he's in it," Marmol said. "It's not a matter of whether we're facing a lefty or a righty. He's in there because he's doing a nice job against everybody. It's just a matter now of resting him to make sure he's fresh."

Tommy Edman had three hits for the NL Central-leading Cardinals. Paul Goldschmidt and Brendan Donovan each drove in a run.

The doubleheader was scheduled after a July 17 rainout. It is the sixth doubleheader for the Cardinals this season, and No. 5 for the Reds.

TJ Friedl hit an RBI double in the seventh to account for Cincinnati's only run. Mike Minor (4-12) issued five walks in three innings and was charged with five runs and five hits.

"I was battling my control," Minor said. "I just couldn't throw where I wanted to. I was trying to throw strikes but obviously I couldn't. If you can't throw a strike, it's tough to get guys out."

The Reds have lost nine of their last 10 games.

"I thought we hit some balls hard but their defense made some nice plays in the outfield," Cincinnati Manager David Bell said.

NATIONALS 5, MARLINS 3 Lane Thomas got things started with a leadoff home run for Washington, which ended up with four home runs in a win over Miami.

GUARDIANS 5-7, TWINS 1-6 Shane Bieber (11-8) allowed one run over eight innings, Amed Rosario had four hits and AL Central-leading Cleveland completed a sweep over Minnesota with a 15-inning victory in the second game.

ROYALS 9, RED SOX 0 Brady Singer (9-4) pitched out of a bases-loaded, nobody out jam in the third and finished with six shutout innings to lead Kansas City over Boston.

WHITE SOX 4, TIGERS 3 Yoan Moncada hit a tiebreaking single in a two-run 11th inning to give Chicago a win over Detroit.

BREWERS 4, YANKEES 1 Willy Adames hit a three-run shot for his 30th homer this season to back Brandon Woodruff as Milwaukee topped New York. Aaron Judge went 1 of 3 with a double and a walk to remain at 57 home runs.

Print Headline: Cardinals hold Reds to one run in doubleheader