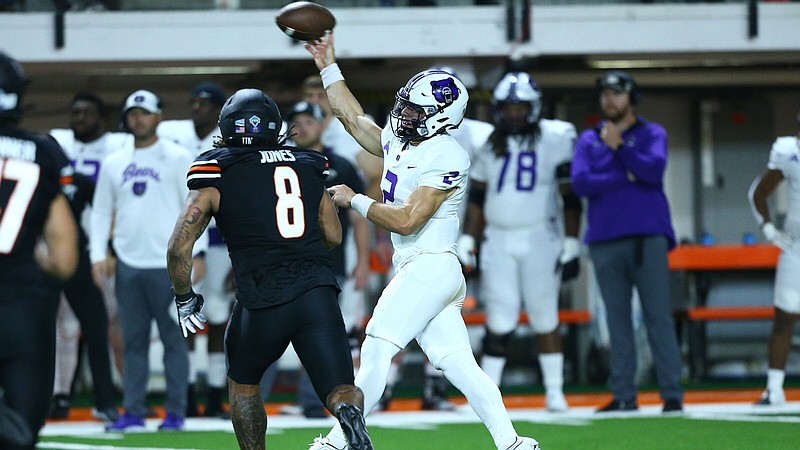 University of Central Arkansas quarterback Will McElvain throws a pass while being pressured by Idaho State defensive lineman Terrance Jones on Saturday during the Bears’ 31-16 victory over the Bengals at Holt Arena in Pocatello, Idaho. McElvain threw for 259 yards and a touchdown in the victory. (Photo courtesy UCA Athletics)

The University of Central Arkansas football team showed fractions of what a good football team looked like in its first two games.

In Saturday afternoon's game against Idaho State, UCA put together the full picture in a 31-16 win inside Holt Arena in Pocatello, Idaho.

"That was a big day, a big win for us," UCA Coach Nathan Brown said. "Like I've been saying, I think this team just needed to experience the thrill of victory, and what a feeling it is."

A loss to Missouri State and a blowout to Ole Miss meant UCA faced Idaho State (0-3) searching for its first win.

The Bears put together their most complete performance to date.

"I'm proud of our guys. They dealt with a lot of adversity the first two weeks with a tough schedule," Brown said. "But they got rewarded tonight. And that was obviously from good play, good coaching and players going out there and making plays."

The Bears went down early as Idaho State drove deep into UCA territory on its second possession. The Bears' defense held, forced a field goal and trailed 3-0.

Following UCA's second consecutive drive to end with a punt, the defense came up big once again. Linebacker Corley Hooper made an acrobatic interception in the end zone to halt a four-minute Bengals drive.

The Bears took a 14-3 lead with 6:27 left in the second quarter when quarterback Will McElvain hit Hale for his second touchdown on a 13-yard pass.

UCA totaled just 27 yards of offense in the first quarter. But the second quarter saw 151 yards, a game-high seven first downs and both first-half scores for UCA.

"It didn't go perfect. ... We went down early three to nothing and, offensively, kind of sputtered early on," Brown said. "Then we kind of tread water, gained our grip and started moving the ball [and] looking good like we thought we can look."

The third quarter was much of the same for UCA.

The Bears started the quarter on offense but were forced to punt almost three minutes later. One play later, UCA chased Idaho State quarterback Hunter Hays out of the pocket. Safety TaMaurion Wilson knocked the ball from Hays' arms, and Hooper returned it 3 yards for a touchdown.

On UCA's next drive, Hale extended the lead to 28-3 with a 1-yard touchdown rush.

The Bears outgained the Bengals 238-142 in the second half. Brown credited his staff for the work they did in preparation for Idaho State's offense.

"I thought our defense had a great game plan," Brown said. "They have an athletic quarterback, he made a lot of plays alive, especially in the first half. But we got him down more often in the second half. [Defensive coordinator] Coach [Matt] Kitchens and that defensive staff, they played three good weeks, whether the first two weeks looked like it or not."

MCElvain completed 24 of 29 passes for 259 yards and 1 touchdown. He connected with nine receivers. John David White led the group with seven catches for 103 yards. He had one catch for 2 yards prior to Saturday.

"Will can do that, and we knew coming into this game that it should be a high-percentage game for him," Brown said. "And Will took advantage of it. I thought our receivers played well and made some tough catches. But [McElvain] played with poise, he played like the guy we knew we recruited. And it helped having that running game going with Darius and Kylin and Trysten [Smith]."