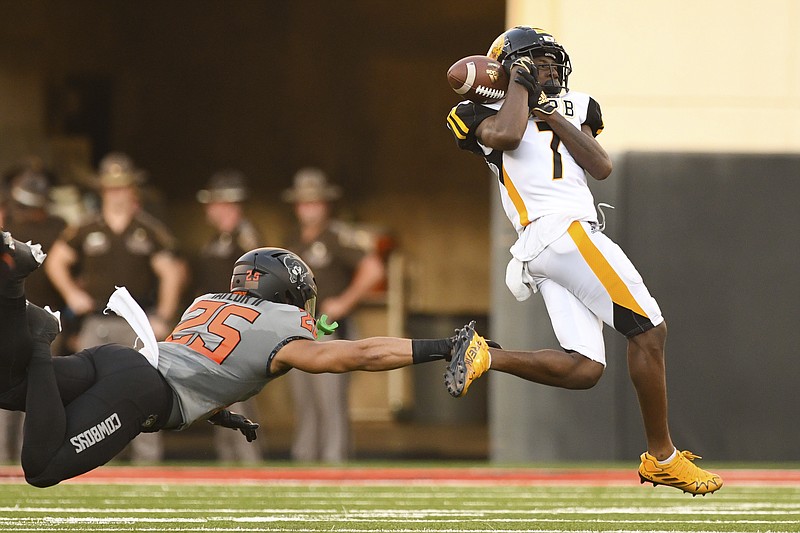 STILLWATER, Okla. -- At a school where a man named Sanders won the 1988 Heisman Trophy, another guy with the same last name kept his own star growing.

Spencer Sanders -- no relation to Hall of Fame running back Barry Sanders -- threw four touchdown passes before halftime, and eighth-ranked Oklahoma State University beat the University of Arkansas at Pine Bluff 63-7 before a sellout crowd of 55,509 at Boone Pickens Stadium on Saturday.

Sanders completed 13 of 16 passes for 242 yards and gave way in the second quarter to Gunnar Gundy, whose father Mike was quarterback during Barry Sanders' Heisman run and is now the Cowboys' head coach. Gunnar Gundy threw 12 for 20 for 128 yards and two touchdowns, but had a pass picked off by UAPB's Derrell Holston, who returned it 6 yards deep in Cowboy territory.

"I thought we did more damage to ourselves than what they did," UAPB Coach Doc Gamble said. "Man for man, I thought we were all right for a while. We can't start off shooting ourselves in the foot."

Skyler Perry, UAPB's fifth-year starter, struggled to a 11-for-27 clip for 70 yards, but fired a 15-yard touchdown pass to Raequan Prince following Holston's interception to end Oklahoma State's shutout bid at 42-7 with 5:24 left before halftime.

Perry had completed 4 of his first 5 passes, but the Cowboys' unrelenting defense pressured him into 11 straight incompletions.

"They called our number," Perry said. "We came out and competed to the best of our ability. We're going to go back, watch film and clean it up going into SWAC play."

Meanwhile, Spencer Sanders got the rout going with a 24-yard pass to Braydon Johnson, two plays and 38 seconds into the game. Johnson also pulled down a 42-yard scoring catch later in the quarter.

Gunnar Gundy rebounded from his interception and organized a 70-yard scoring drive, lobbing a 16-yard scoring pass to Talyn Shettron with 1:23 left before halftime to shape the score at 49-7.

It was 56-7 after Gundy threw his second TD pass to Cale Cabiness from 25 yards out with 9 minutes left in the third.

Gundy broke a 24-yard scramble early in the fourth quarter. That led to a 53-yard touchdown scamper by Ollie Gordon, as he tightroped the Pokes' sideline at the end of the run with 13:59 left in the game.

"Our focus wasn't more so with their defense as it was their offense," Gamble said. "We tried to slow the game down a little bit to limit their possessions offensively. Outside of moving the chains and running the chains, I think we did OK with that, but they had some big plays."

Trace Ford blocked a Josh Sanchez punt and returned it 15 yards to give the Pokes a 14-0 lead. With 10:50 to go before halftime, Sione Asi blocked a 39-yard field goal attempt by Cristofer Thompson, Korie Black scooped up the loose ball and ran 38 yards for a touchdown that made it 42-0. With that play, the Cowboys had scored on more than one blocked kick in a game for the first time in school history.

"They gave us a dose of our own medicine," Gamble said. "Those are things we do."

UAPB had two takeaways to Oklahoma State's one.

The Lions caught a break when Isaac Peppers forced a fumble that Rylan Woods recovered at the Cowboys' 22. But the following drive ended with Black's scoop-and-score.

UAPB's Kierstan Rogers caught a 32-yard pass from Macon out of the backfield in the fourth quarter. On that same drive, Kenji Lewis was credited with a 25-yard reception after a video review showed him stepping out of bounds on his way to the end zone. But UAPB stalled from the Oklahoma State 3 on four straight Macon incompletions, most of them drops.

Kayvon Britten, two weeks removed from a 237-yard rushing performance against Lane College, had 18 yards on 7 carries (with a long of 15 yards) to lead UAPB. The Lions had to settle for 81 rushing yards and 149 passing yards.

The Cowboys totaled 538 of offense. Gordon rushed 3 times for 65 yards and Gundy 6 times for 42 yards, while Johnson totaled 86 yards on 4 receptions.

Oklahoma State will take next week off and play its first road game of the season at Baylor University to start Big 12 Conference action Oct. 1.