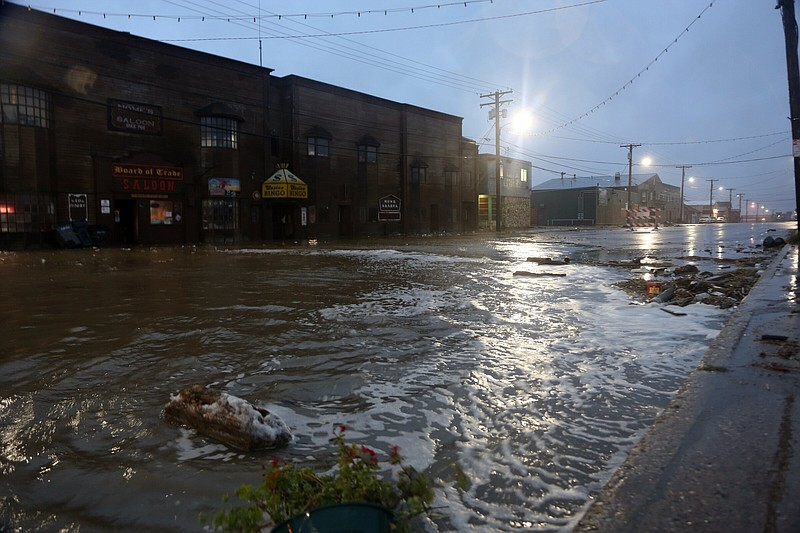 Water rushes down Front Street, just a half block from the Bering Sea, in Nome, Alaska, on Saturday. Much of Alaska’s western coast could see flooding and high winds as the remnants of Typhoon Merbok moved into the Bering Sea region. (AP/Peggy Fagerstrom)

A federal control board that oversees Puerto Rico's finances said the impasse with bondholders means it would resume litigation against them in an attempt to restructure the debt, warning that any cost associated with debt repayment would be passed along to consumers.

Gov. Pedro Pierluisi said the mediation failed: "My administration cannot accept a deal that unduly strains the wallets of our hard-working families, or the resources businesses need to fuel our economy and create and maintain jobs on the island."

Pierluisi said the power company will remain in bankruptcy given the pending litigation.

Board member Justin Peterson criticized the board for abandoning mediation efforts as he advocated for bondholders to be paid and said a deal to end bankruptcy and avoid lengthy and expensive litigation "was clearly in reach."

"It would have catalyzed much-needed private-sector investment to rebuild and modernize Puerto Rico's grid and would have provided the citizens ... with cleaner, more reliable and more affordable power," he said. "Now all of this could be delayed for years."

Puerto Rico's power grid remains frail after Hurricane Maria razed it in 2017, with failures reported daily. The grid was already crumbling before the storm hit as a result of aging infrastructure and a lack of maintenance.

FORT LAUDERDALE, Fla. -- Attorneys for Florida school shooter Nikolas Cruz asked the judge in his murder case to remove herself Friday, two days after she scolded them when they abruptly rested their case after calling only a fraction of their announced witnesses.

Defense attorneys said Scherer's repeated improper and unjustified attacks on the defense counsel undermine the public's confidence in the judicial system and have also caused Cruz to fear that he will not get a fair trial.

Prosecutors said Scherer has been respectful to both sides.

Cruz's attorneys had told the judge and prosecutors they would be calling 80 witnesses but rested at the start of Wednesday's court session after calling only about 25.

There were 11 days of defense testimony overall, the last two spotlighting experts saying his birth mother's heavy use of alcohol during pregnancy might have affected his brain development and led to his murdering 17 people at Parkland's Marjory Stoneman Douglas High School four years ago.

The sudden announcement by lead attorney McNeill led to a heated exchange between her and Scherer, who called the decision without warning to her or the prosecution "the most uncalled for, unprofessional way to try a case."

NEW YORK -- Yeshiva University has abruptly suspended student club activity in the wake of a U.S. Supreme Court decision last week that ordered the school to recognize -- for now -- an LGBTQ student group.

In an email to students, university officials Friday said that they would halt all undergraduate club activities while the school "immediately takes steps to follow the roadmap provided by the U.S. Supreme Court to protect ... religious freedom."

On Wednesday, the court cleared the way for the LGBTQ group, YU Pride Alliance, to gain recognition from the Jewish university in New York.

The undergraduate group describes itself as "a supportive space for all students, of all sexual orientations and gender identities, to feel respected, visible, and represented."

By a 5-4 vote, the justices lifted a temporary hold on a court order that requires the school to recognize the group, even as the fight continues in New York courts. Two conservatives, Chief Justice John Roberts and Justice Brett Kavanaugh, sided with the court's three liberal justices to form a majority, although their disagreement appears to be mostly about procedure.

BATON ROUGE -- A Louisiana State University student was shot and killed in her car just a few miles from the Baton Rouge campus Friday.

Allison Rice, 21, was found about 2:20 a.m. and had been shot multiple times, The Advocate reported.

The shooting just 3 miles from the campus prompted Mayor Sharon Weston Broome to once again call for an end to the violence plaguing the state's capital city. There have been more than six dozen reported homicides in Baton Rouge this year.

"This senseless violence is completely unacceptable, and Baton Rouge police officers are thoroughly investigating to bring the perpetrator to justice," Broome said.