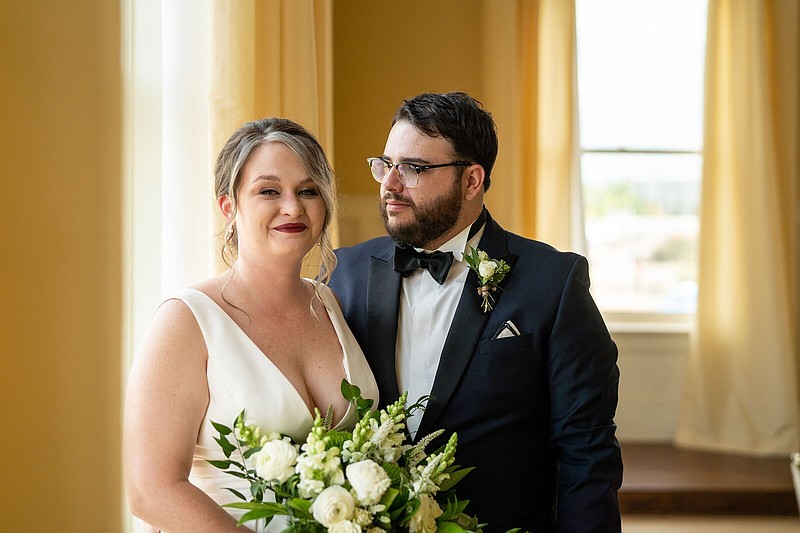 Parents of the bride are Nancy Chandler Griebel and Charles Andrew Griebel, both of Little Rock. Her grandparents are the late Marguerite and Weldon Chandler of Springfield, Mo., and the late Mildred and Jack Griebel of Bryant.

The groom is the son of Tanya and John Jacobs of Benton and Thomas Bowden of Little Rock. He is the grandson of Zeda Baker of Broken Arrow, Okla., M. Dale Davis of Benton and Martha and Freddy Bowden of Atkins.

The ceremony site was decorated with arrangements of snapdragons, roses, ranunculus and green dianthus balls.

The bride, given in marriage by her parents, wore a white satin ballgown with a cummerbund at the waist. She carried a bouquet of roses, snapdragons, ranunculus and green dianthus balls.

Serving as her sister's maid of honor was Meredith Chandler Griebel of Prague. Bridesmaids were Vernai Bates of Nashville, Tenn.; Molly Reed and Kathryn Worlow, both of North Little Rock; and Charlotte Davidson, Jessica Abel and Katelyn Grillo, all of Little Rock. They carried clutches of greenery tied with white ribbon.

Flower children were Harrison and Hudson Chandler of Independence, Mo., and Adeline, Caroline and Bellamy Capps of Clifty (Madison County).

Cody Yates of Little Rock served as best man. Groomsmen were Jacob McNeil and Jordan Grillo, both of Little Rock; Scott Crenshaw of Lowell; Kurtis Platt of Springdale; David Horne of Denver; and Rueben Ballard of North Little Rock. Guests were seated by Ed Sur of Farmington and Matthew Tuputala of Little Rock.

A reception, also at the Junior League Building, followed the ceremony. Guest tables covered with white cloths were centered with glass trumpet vases filled with foliage and white roses.

The groom has bachelor's degrees in history and political science from Lyon College, where he was a member of Mortar Board, Phi Alpha Theta and the college's band and concert choir and served as president of the Phi Theta Gamma Chapter of Zeta Beta Tau. He received his law degree from the University of Arkansas at Little Rock William H. Bowen School of Law and is a staff attorney and education outreach director for Legal Aid of Arkansas' Fair Housing Project.

The couple will live in Little Rock after a wedding trip to London and Paris.