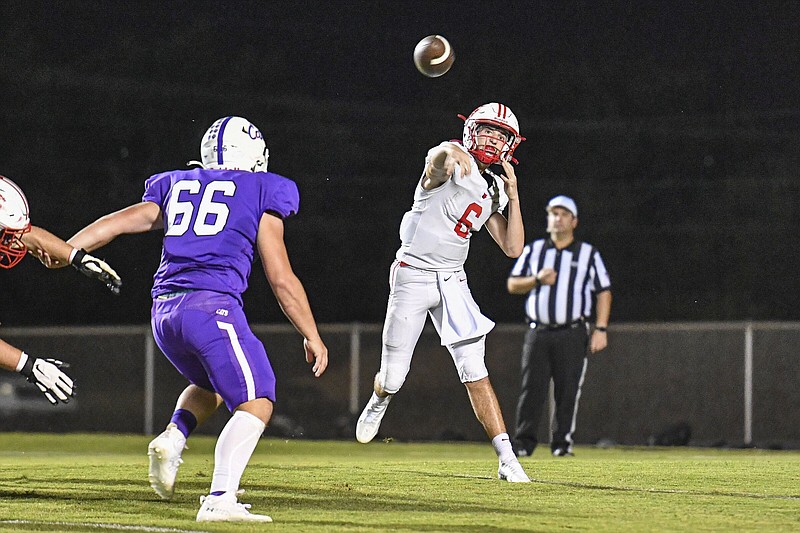 BOONEVILLE – The marquee nonconference game in the state went about like the first three meetings between Booneville and Harding Academy did, and that was with the Wildcats winning handily.

Harding Academy turned a couple of turnovers into scores, including ones early to set the tone, in a 44-14 win on Friday.

The game was set up after Harding Academy was moved up to Class 4A because of the Competitive Equity Factor with both the Wildcats and Booneville needing a nonconference game to fill out their schedules.

PLAY OF THE GAME On the sixth play, Harding Academy disrupted an option pitch with Colton Smith recovering the fumble at Booneville's 35 just 2 minutes, 27 seconds into the game. The Wildcats capitalized six plays later with quarterback Owen Miller hitting Endy McGalliard with a touchdown pass for a quick 7-0 lead that turned into 24-7 at the half.

"We knew coming into that it was going to be a challenge, and we want to challenge them. We don't want to back down from anybody. We're proud of the way they played," Booneville coach Doc Crowley. Booneville held Pine Bluff Dollarway and Ozark scoreless in the first half in the first two games of the season.

PLAYER OF THE GAME Harding Academy senior kicker Kyle Ferrie kicked field goals of 55, 42 and 40 yards in addition to converting all five extra-point attempts. Ferrie also boomed eight kickoffs into the end zone for touchbacks, kicking four out of the end zone and averaging 69.8 yards per kickoff, and giving him touchbacks on 22 of his 24 kickoffs this season. Last year, Ferrie kicked 100 of his 112 kickoffs into the end zone. Friday's 14 points gives him 239 points in his career, which puts within reach of the state record of 295 points set by Shiloh Christian's Trevor Tumlinson from 2007-2009.

Booneville is still adjusting to the season-ending knee injury to junior fullback Rylen Ray suffered against Pine Bluff Dollarway in the opener.

NOTABLE Booneville entered Friday's game ranked No. 2 in Class 3A while Harding Academy was No. 4 in Class 4A. ... The win was Harding Academy's 63rd in its last 64 games against in-state opponents. ... Booneville junior running back Dax Goff had 13 carries for 125 yards and a touchdown on Friday for this third-straight game of at least 100 rushing yards this season and fifth of his career. ... Goff also had 8 solo tackles, 5 assists, a sack and a tackle for loss while also punting three times for a 41.3 yard average.

UP NEXT Booneville will travel to Hackett for the 3A-1 opener. Harding Academy makes its debut in the 4A-2, playing its home opener against Stuttgart.

10 Points scored off turnovers by Harding Academy on Friday.

20 Average drive start for Booneville on its first nine possessions.

267 Rushing yards by Booneville on 46 attempts.