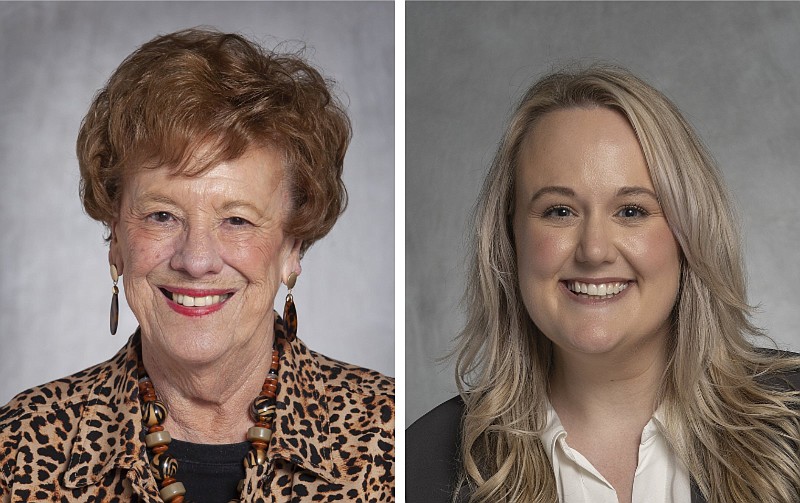 State Sen. Jane English (left), R-North Little Rock, is facing Democrat Allison Sweatman for the Senate District 13 seat in the Nov. 8 general election. The district includes all of Maumelle and Morgan west to the Faulkner County line and most of North Little Rock north of Interstate 40 and west of U.S. 67 up to Jacksonville to just below Little Rock Air Force Base. Libertarian candidate Noah Jones, not pictured, is also seeking the District 13 seat.

In her challenge of Republican state Sen. Jane English, Democratic candidate Allison Sweatman says she supports a plan to raise Arkansas teacher salaries by $4,000 and raise the minimum teacher salary by $6,000 a year to $42,000, and she wants to work on changing state law to allow abortions in case of rape or incest.

Arkansas' state law only allows abortion to save the life of a mother in a medical emergency.

English, a self-described commonsense conservative, says she seeks re-election to the state Senate to continue her work in the Legislature to improve education and workforce development in Arkansas.

English and Sweatman are vying for the Senate District 13 seat along with Libertarian candidate Noah Jones in the Nov. 8 general election. Jones could not be reached for comment by telephone or email in the past two weeks. All three candidates reside in North Little Rock.

Senate District 13 includes all of Maumelle and Morgan west to the Faulkner county line and most of North Little Rock north of Interstate 40 and west of U.S. 67 up to Jacksonville to just below Little Rock Air Force base. The northern boundary is below the base and includes part of northern Pulaski county.

The state Board of Apportionment -- comprised of the governor, attorney general and secretary of state -- changed the boundaries of legislative districts in November 2021 based on information from the U.S. census.

English, 81, was born in Lincoln, Neb., and moved to Arkansas in 1981 with her husband, who served 30 years in the Army. She earned a bachelor's degree in economics and finance from Arkansas Tech University.

Among other things, she was senior project manager for the Arkansas Industrial Development Commission from 1984-1999 and director of the Workforce Development Board from 2001-2004.

Sweatman is making her first bid for elected office.

She is a licensed social worker. She worked stints as a session proofer and an editor for the Bureau of Legislative Research between December 2020 and February 2022.

Sweatman, 32, was born in Little Rock and graduated from Cabot High School. She earned her bachelor's degree in communications, writing and biblical studies from Ouachita Baptist University and a master's degree in social work from Tulane University. She is married with two children.

She said voters should cast their ballots for her because she is a professional listener as well as a mental health professional and the residents of North Little Rock, Sherwood, Jacksonville and Maumelle deserve a senator who will listen to them and take their concerns into consideration.

English said voters should vote for her to allow her to continue her work in the Legislature to improve education and workforce development.

Sweatman said she has heard complaints from people in the Senate district about English not listening to them or responding to their phone calls or email and, "not even a courtesy response."

"I don't know who she is hearing that from," English said. "This is big district and obviously not everyone is going to know you"

Sweatman said people in the Senate district deserve a senator who will stand up against extremism such as the state's law that provides "virtually no exceptions" for abortion.

She said she wants the Legislature to change state law and allow abortions in cases of rape or incest in the 2023 regular session. Requiring women who have been through terrible trauma and sexual assault and incest to carry their babies to term will cause more harm to them, she said.

English said that "I am not going to propose that we change the abortion law as it is now."

Sweatman said her top priorities in the Senate would include supporting the RAISE Act proposed by Democrats in the Legislature in July to increase teacher salaries. The Republican-dominated House and Senate voted to adjourn the Aug. 9-11 special session in which tax cuts were enacted before Democrats could seek a two-thirds vote of each chamber to extend the special session to consider teacher pay raises.

The proposal would provide $4,000 raises to teachers, raise the minimum teacher salary from $36,000 to $42,000 a year and create the teacher pay sustainability fund.

"We had bipartisan support in August and the money was there and the need was there,'" Sweatman said. "All that was needed was courage from a few more legislators."

English said the House and Senate Education Committees are currently conducting an educational adequacy study, which it does every two years, and the Legislature has put more money into teacher salaries during each of the past several years, but some teachers didn't get the increased money because the school boards and superintendents decide how to spend the money.

Regarding the proposed RAISE Act, she said ""we may end up with that in the session.

"That may be exactly what happens," English said.

But she said "there are school districts and school boards and we can't tell them how to spend their money because then you take away local control."

Sweatman said tax dollars should go to the public schools, and she would have to see details of a voucher proposal to help parents pay for their children's education in private schools or home schooling before taking a position on any proposals. The state's top priority should be the existing public schools, she said.

English said "We are a school choice state.

"Parents should decide what is the best education for their child whether it be a particular public school, homeschool, charter school or private school," she said. "I support vouchers for students who have special needs."

Sweatman said she would have voted against a measure in the Aug. 9-11 special session that accelerated the reduction of the state's individual income tax rate to 4.9%, retroactive to Jan. 1, 2022, because that doesn't mean much for the middle class and the poor.

"It gave a huge break to the wealthiest in the state," Sweatman said.

She said she wants more money in the pockets of the middle class and poor Arkansans.

English said she is pleased to vote to reduce the state's top individual income tax rate to 4.9%.

English said she has voted for income tax cuts in the Legislature for low-income, middle-income and upper-income Arkansans over the past several years.

Sweatman said her other top priorities in the state Senate would include making sure all public schools have a dedicated mental health professional on site because the state is not meeting the mental health needs of children. She said a school setting is the best place to assess these needs.

She said her priorities also would include making sure foster care is less traumatic by training foster homes with trauma-informed care and follow-up, providing more caseworkers to lower the caseloads, and providing incentives for businesses to hire former foster children aged 18 to 22.

English said her top priorities in the Senate will continue to be education and workforce development and making sure each student entering kindergarten and leaving the K-12 system has the education and skills to support themselves and their families whether they enter the workforce or attend college.

"That's just been my whole focus," she said. "Other stuff comes in that affects it."

English noted that she leveraged her 2014 vote to provide spending authority for the state's Medicaid expansion in return for changes in the state's workforce development system because "we had all these silos in state government."

The state's workforce development system is moving in the right direction slowly and surely, she said.

"Silos are breaking down and agencies and programs are working together to improve the system that will benefit the citizens of the state for the future," English said. "It is sometimes amazing what can happen when folks are unleashed.

"To me all this stuff goes together," English said. " We want to have fewer people on Medicaid, in prison or dependent on government programs, and that means making sure students are prepared for a career pathway. Folks without a good education and the ability to read are the key to almost every issue we have in state government."