Biden in London to mourn queen, start ties with Britain’s new premier by The Associated Press | September 18, 2022 at 3:48 a.m. 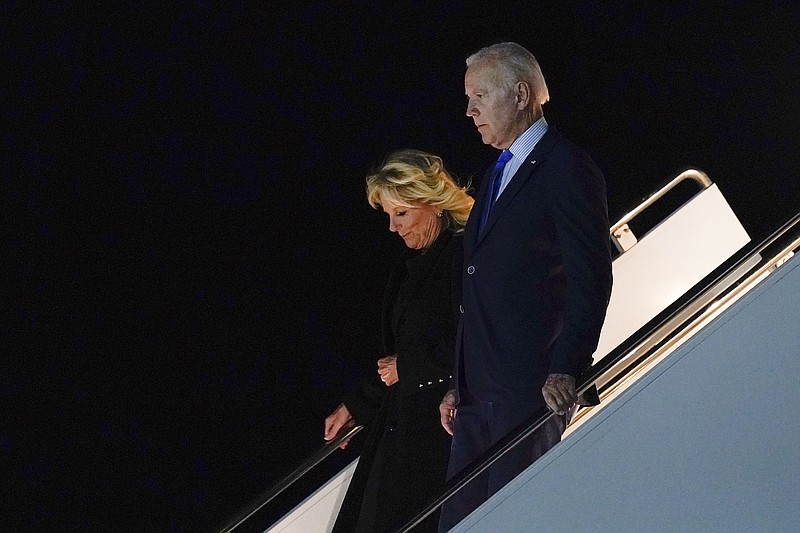 LONDON -- President Joe Biden arrived in London to pay his respects to Queen Elizabeth II at a time of transition in relations between the U.S. and U.K., as a new monarch and prime minister are settling in.

The hawkish approach of Prime Minister Liz Truss to Russia and China puts her on the same page as Biden. But the rise of Truss, 47, who once called the relationship "special but not exclusive," could mark a decidedly new chapter in the trans-Atlantic partnership on trade and more.

Biden arrived Saturday in London and had been set to meet today with Truss. But the prime minister's office said Saturday they would skip the weekend hello.

Instead, they will meet Wednesday in New York at the U.N. General Assembly, her office said, though Truss still planned to gather with other world leaders converging on London for the royal funeral. The White House confirmed the U.N. meeting just as the president boarded Air Force One.

Of high concern for Biden officials in the early going of Truss' premiership is her backing of legislation that would shred parts of the post-Brexit trading arrangements in Northern Ireland.

Analysts say the move could cause deep strain between the U.K. and the European Union, and undermine peace in Northern Ireland. White House press secretary Karine Jean-Pierre said the move "would not create a conducive environment" for crafting a long-awaited U.S.-UK trade deal coveted by Truss and her Conservative Party.

"She's signaled that she's willing to go to the mattresses on this and that's going to cause a rift not just between the U.K. and EU, but the U.K. and the U.S.," said Max Bergmann, director of the Europe program at the Center for Strategic and International Studies in Washington and a former senior State Department official in the Obama administration. "It's one that's going to keep the White House up at night."

The two close allies now find themselves in a period of political uncertainty on both sides of the Atlantic. Like Biden, King Charles III faces questions from the public about whether his age will limit his ability to faithfully carry out the duties of the monarch.

Charles, 73, and Biden, 79, discussed global cooperation on the climate crisis last year while both attended a summit in Glasgow, Scotland. They also met at Buckingham Palace in June 2021 at a reception the queen hosted before a world leaders' summit in Cornwall.

Truss finds herself, as Biden does, facing questions about whether she has what it takes to lift a country battered by stubborn inflation borne out of the coronavirus pandemic and exacerbated by Russia's invasion of Ukraine unleashing chaos on the global energy market.

All the while, Britain -- and the rest of Europe -- is carefully watching to see what the upcoming U.S. midterm elections will bring for the Democratic American president after he vowed upon taking office that "America is back" to being a full partner in the international community after four years of Republican Donald Trump pushing his "America First" worldview.

Truss, a former accountant who was first elected to Parliament in 2010, hasn't had much interaction with Biden. The U.S. president called her earlier this month to congratulate her. Truss, as foreign secretary, accompanied her predecessor, Boris Johnson, on a White House visit last year.

BUMPS ALONG THE WAY

It's been more than 75 years since Winston Churchill declared there was a "special relationship" between the two nations, a notion that leaders on both sides have repeatedly affirmed. Still, there have been bumps along the way.

Tony Blair was derisively branded by the British tabloids as George W. Bush's "poodle" for backing the 2003 American-led invasion of Iraq. David Cameron and Barack Obama had a "bromance," but Obama also had his frustrations with the Brits over defense spending and the U.K.'s handling of Libya after the 2011 ouster of Muammar Gaddafi.

Margaret Thatcher and Ronald Reagan forged a close alliance in the midst of the Cold War, with the prime minister once telling students that the Republican president's "really good sense of humor" helped their relationship. But there were difficulties too, such as when Thatcher and members of her Cabinet bristled at the Reagan administration's initial neutrality in the Falklands War.

The White House wasn't expecting Truss's announcement in May, when she was foreign secretary, that the government would move forward with legislation that would rewrite parts of the Northern Ireland Protocol. The agreement was part of the U.K.'s 2020 Brexit withdrawal from the EU that was designed to avoid a hard north-south border with Ireland that might upset Northern Ireland's fragile peace.

Now, in the first weeks of Truss' premiership, Biden administration officials are carefully taking the measure of the new British leader. Analysts say there is some trepidation in the administration that undercutting the Northern Ireland protocol could plunge Europe into trade turmoil at a moment when Biden is working mightily to keep the West unified in confronting Russia over its aggression against Ukraine.

To be certain, there were areas of friction between Biden and Johnson, who had a warm rapport with former President Donald Trump.

Biden staunchly opposed Brexit as a candidate and had expressed great concern over the future of Northern Ireland. Biden once even derided Johnson as a "physical and emotional clone" of Trump.

Johnson worked hard to overcome that impression, stressing his common ground with Biden on climate change, support for international institutions and most notably by making certain Britain was an early and generous member of the U.S.-led alliance providing economic and military assistance to Ukraine after the Russian invasion.

The former prime minister also unsuccessfully pressed Biden starting days into his administration to begin negotiations on a new U.S.-U.K. trade deal just as the U.K. regained control over its national trade policy weeks before Biden took office and following the end of a post-Brexit transition period.

But Biden largely kept focus on his domestic to-do list in the early going of his presidency-- passing trillions in spending on coronavirus relief, infrastructure and more -- and put negotiations on trade deals on the back burner.

Elliot Abrams, chairman of the conservative foreign policy group Vandenberg Coalition, said Truss needs Biden to make a new U.S.-U.K. trade deal a priority. Queen Elizabeth's funeral won't be the setting for tough bilateral conversations, but it still marks a moment for the two leaders to begin taking stock of each other.

Truss, who succeeded Johnson after he was forced to resign in the face of a string of scandals, has lagged in the opinion polls. She also won her election with a smaller margin than her recent predecessors and is looking for an early win.

"I think if I were [Truss], I want recognition of the leading role Britain's played, far more than any other country outside the United States in supporting Ukraine," said Abrams, who served in senior national security and foreign policy roles in the Trump, George W. Bush and Reagan administrations. "And I think I'd want some positive economic message to give the British people, which could be that the free trade agreement negotiations are starting." 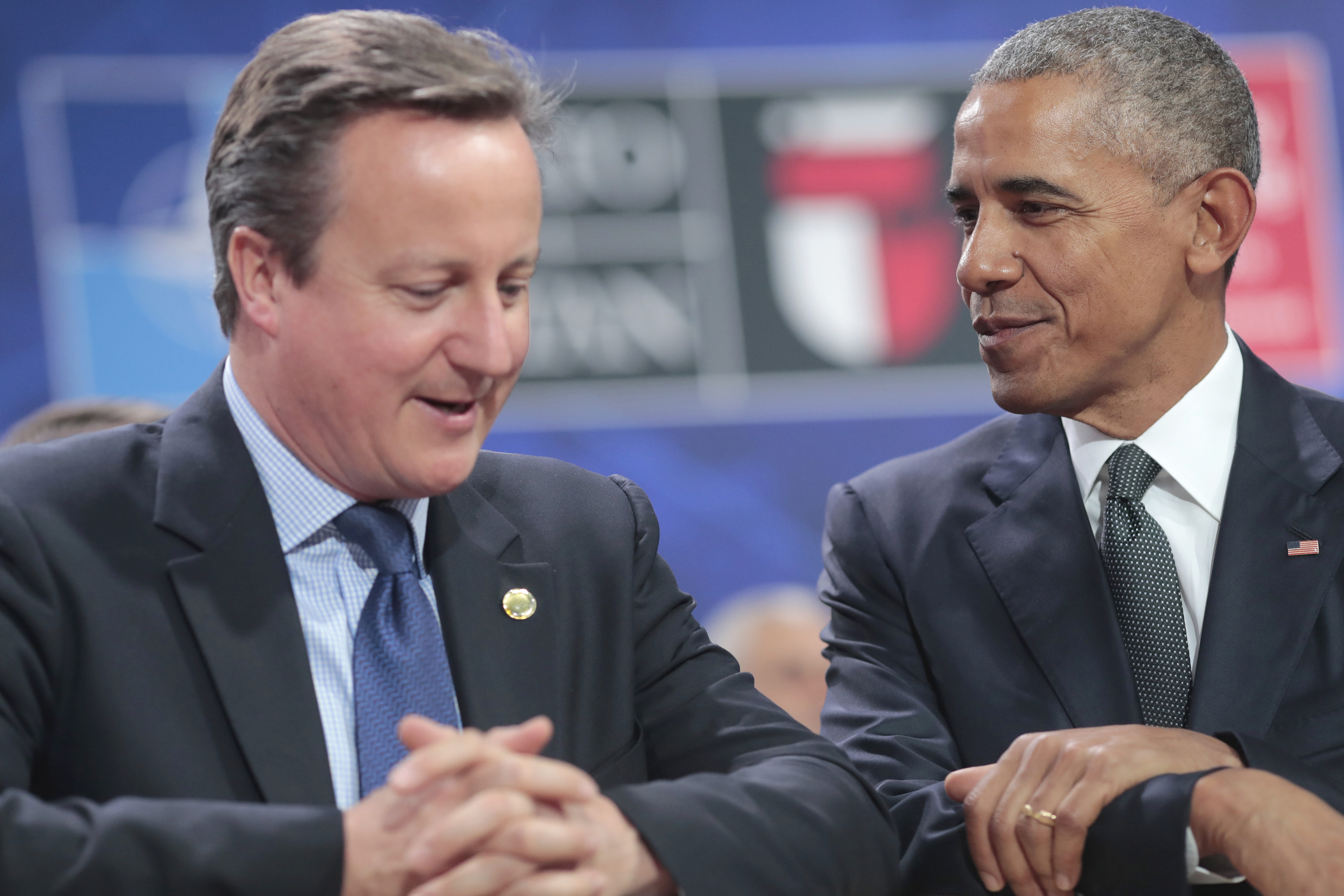 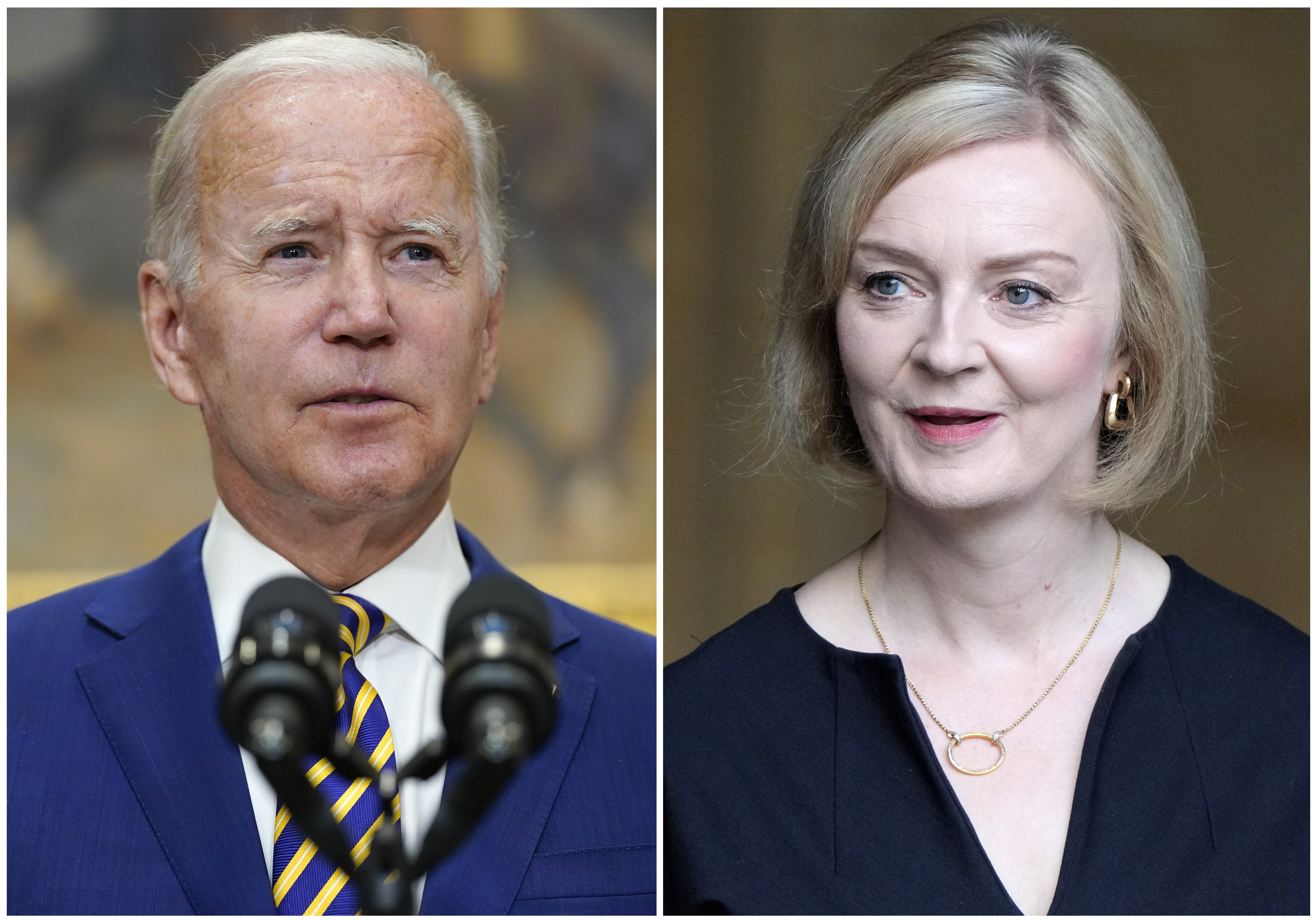 This combination of photos shows U.S. President Joe Biden at the White House on Aug. 24, 2022, in Washington, left, and Britain's Prime Minister Liz Truss at Westminster Hall, in the Palace of Westminster, in London on Sept. 12, 2022. The prime minister's office said Biden and Truss will meet on Sunday, Sept. 18, at 10 Downing Street, one of several meetings that the new prime minister plans to hold with world leaders converging on London for Monday's royal funeral. (AP Photo) 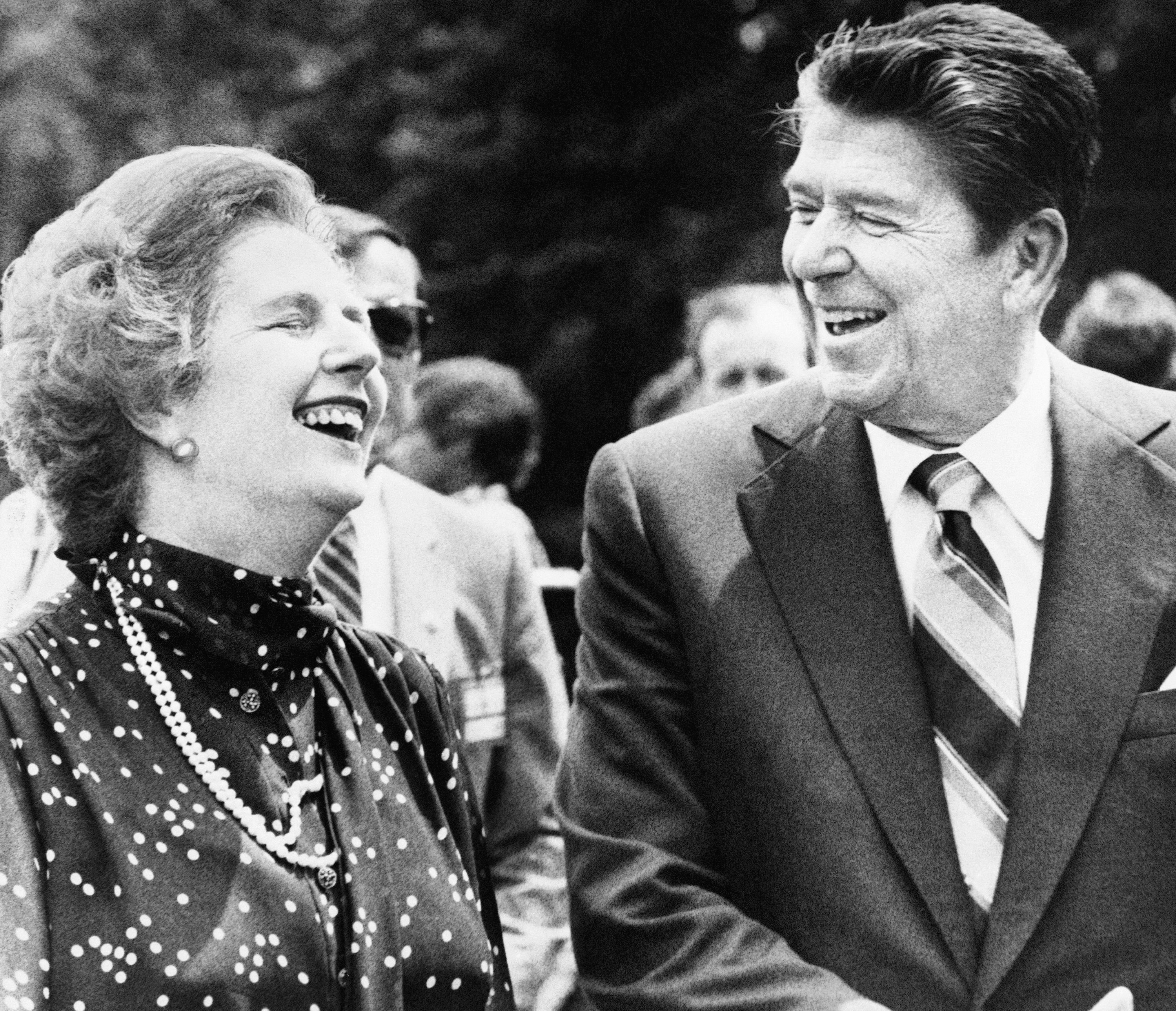 FILE - U.S. President Ronald Reagan, right, and Britain's Prime Minister Margaret Thatcher, laugh together during a break from a session at the Ottawa Summit in this file photo dated July 21, 1981, at Government House in Ottawa, Canada. Thatcher and Reagan forged a close alliance in the midst of the Cold War, with the prime minister once telling students that the Republican president's “really good sense of humor” helped their relationship. (AP Photo/File) 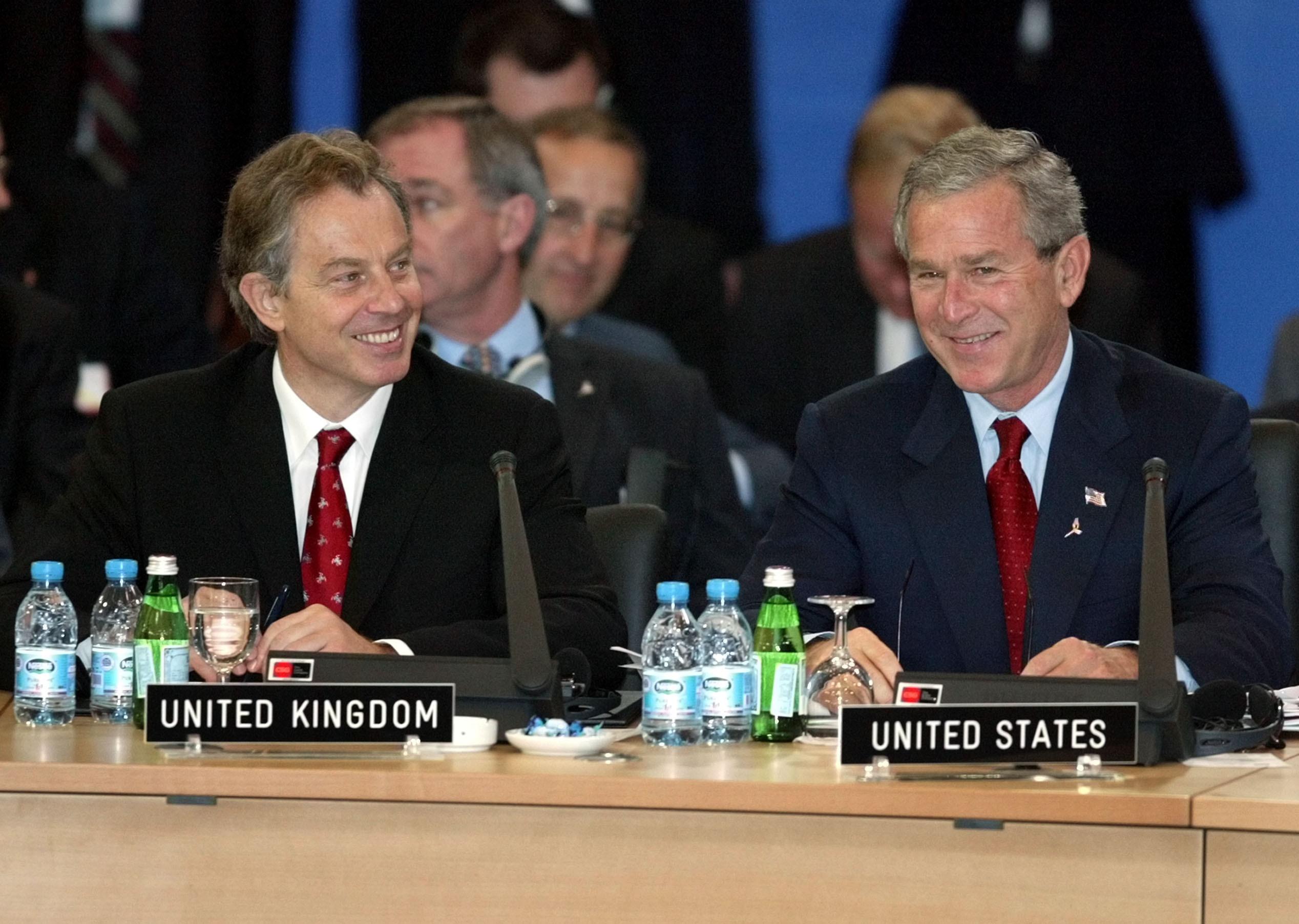 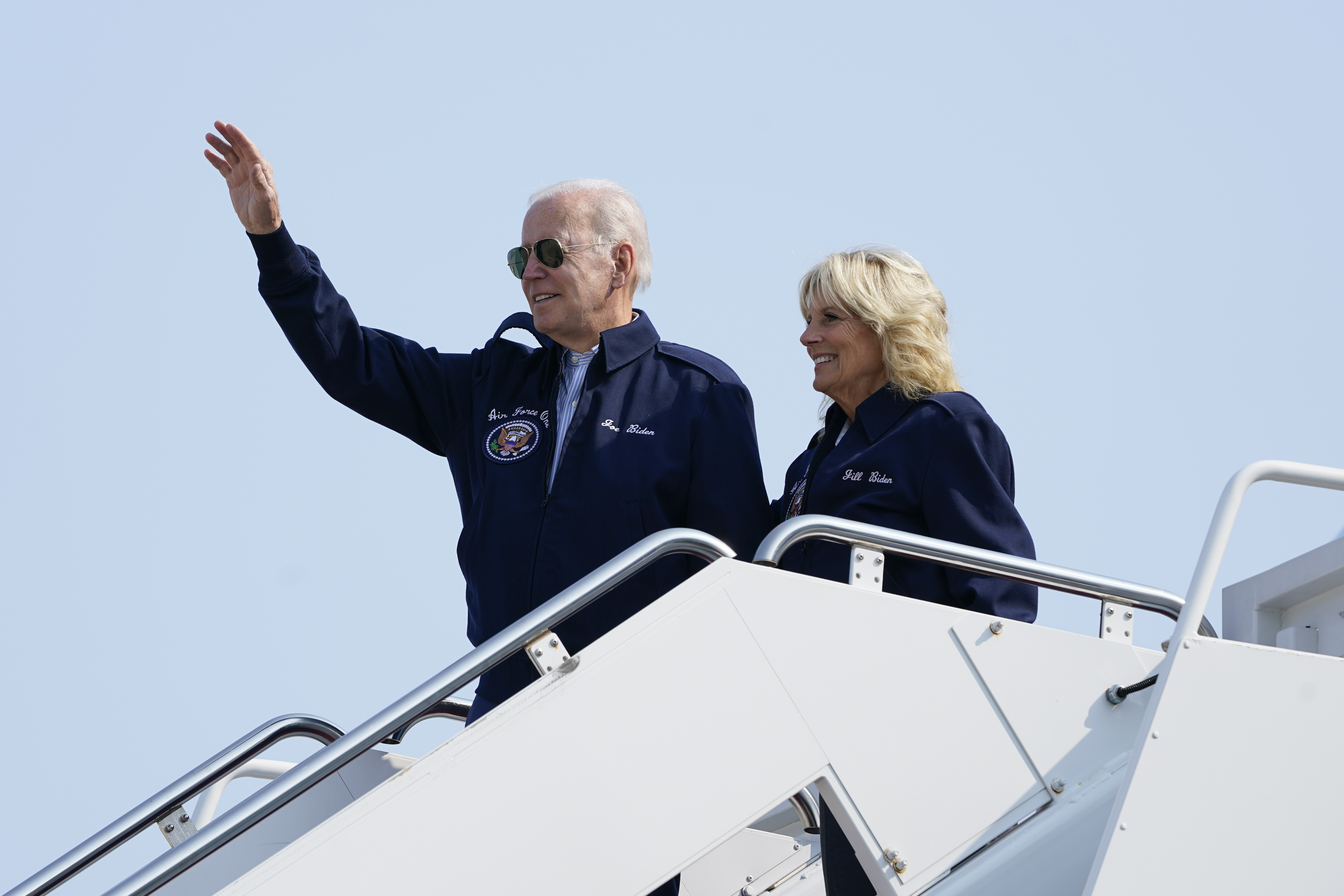 President Joe Biden waves as he stands at the top of the steps of Air Force One before boarding with first lady Jill Biden at Andrews Air Force Base, Md., Saturday, Sept. 17, 2022, as they head to London to attend the funeral for Queen Elizabeth II. To commemorate the U.S. Air Force's 75th Anniversary as a service the Bidens are wearing Air Force One jackets. (AP Photo/Susan Walsh) 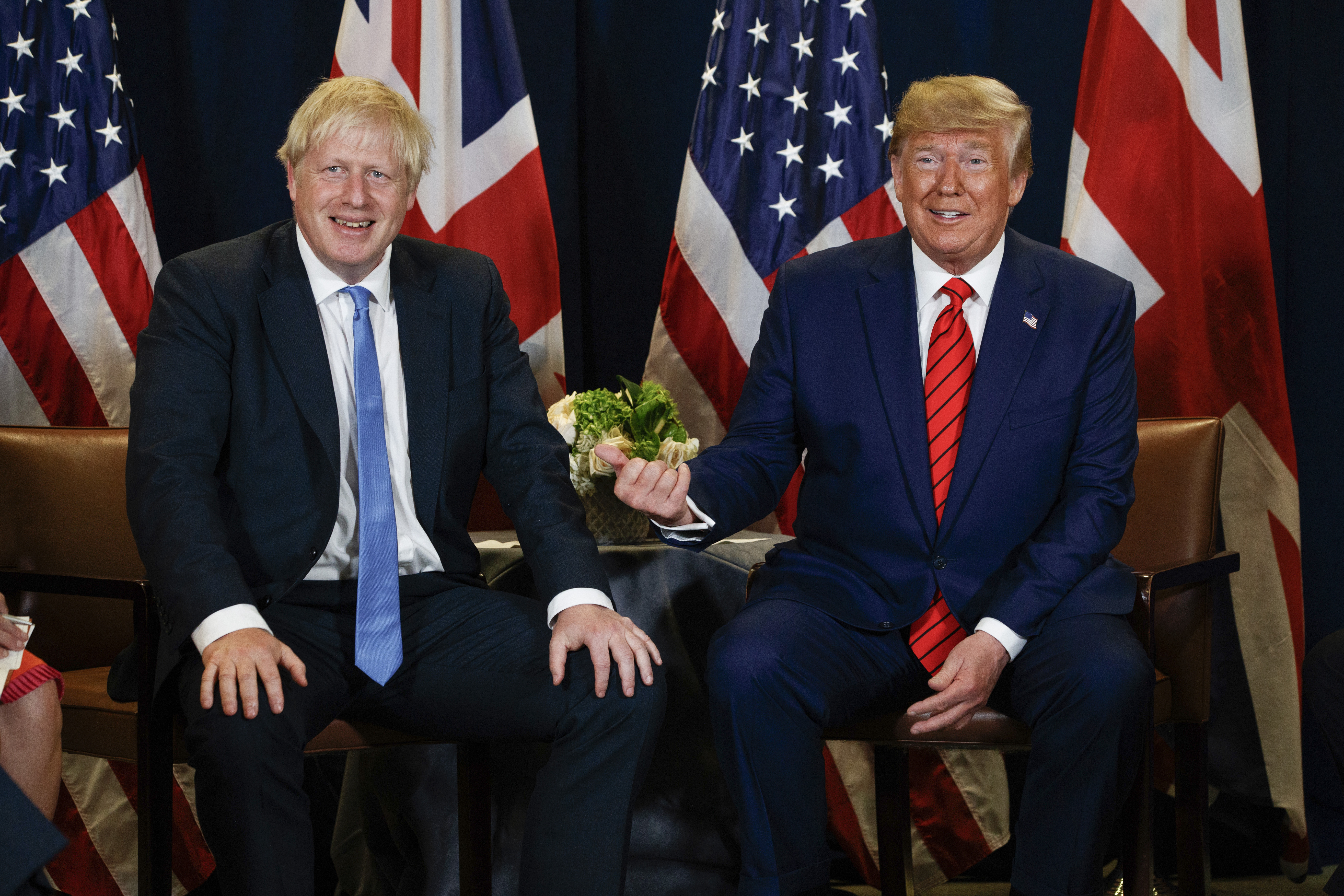 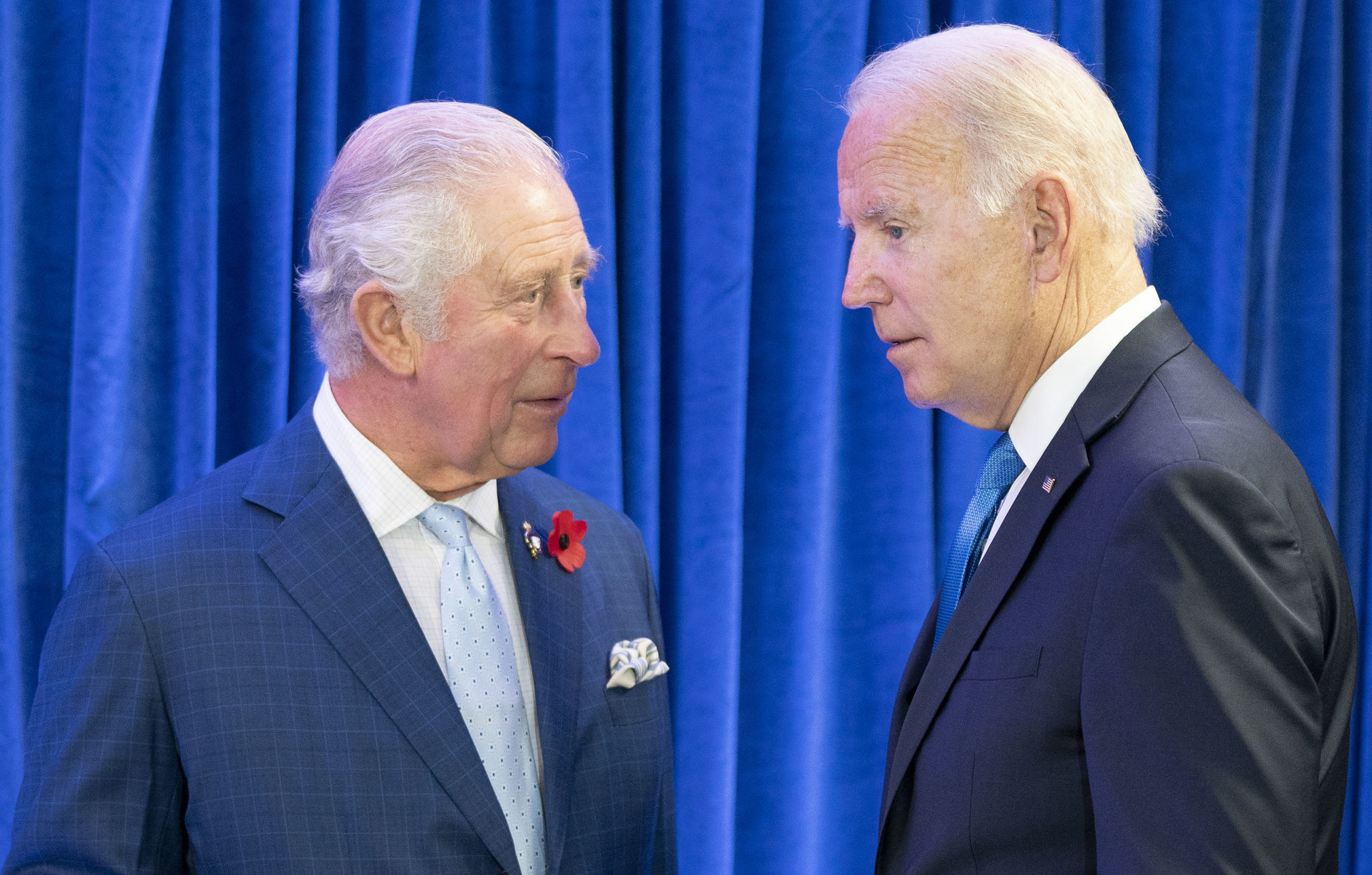 FILE - Britain's Prince Charles, left, greets the President of the United States Joe Biden ahead of their bilateral meeting during the Cop26 summit at the Scottish Event Campus (SEC) in Glasgow, Scotland, Nov. 2, 2021. Charles and Biden discussed global cooperation on the climate crisis last year while both attended a summit in Glasgow, Scotland. (Jane Barlow/Pool Photo via AP, File)