Active covid cases in state down to 8,737 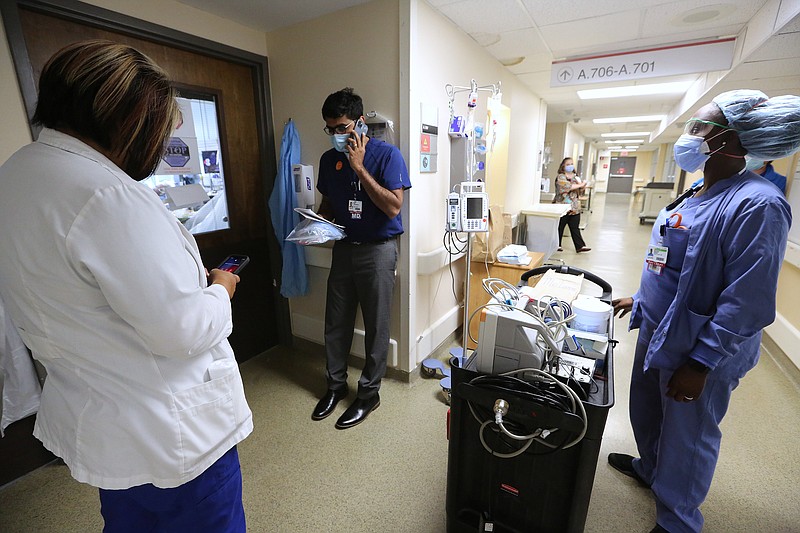 Dr. Ramakrishna Thotakura (center) talks on the phone as nurses Kia Kandlbinder (left) and Brionna Rivers (right) look on while making rounds in one of the Covid wards at University of Arkansas for Medical Science on Thursday, July 22, 2021, in Little Rock. .More photos at www.arkansasonline.com/725covid/.(Arkansas Democrat-Gazette/Thomas Metthe)

As of Sunday, 946,305 cases have been reported since the start of the pandemic. That number increased by 191 Sunday. It was the lowest reported number of new cases for any day since 165 new cases reported July 3 -- when testing was down for the Independence Day weekend.

The new daily cases rolling seven-day average was 692, which is down from last Sunday's average of 722.

The number of intensive care unit patients increased by five for a total of 47, which is up one from last Sunday's 46.

One person was put on a ventilator Sunday, bringing the total to 18. According to data, the total number of Arkansans on ventilators has ranged from 14 to 18 over the past week.

No new deaths were reported Sunday. There have been 11,993 deaths reported since the start of the pandemic. This number is up by 32 from last week's 11,961.

The total number of people fully vaccinated was 1,664,567 as of Sunday. There were 2,271 full vaccinations reported over the past week.

Pulaski County was leading the state with 32 covid-19 cases Sunday. Jefferson and Benton tied with 13, and Craighead followed with 12.

Print Headline: Active covid cases in state down to 8,737