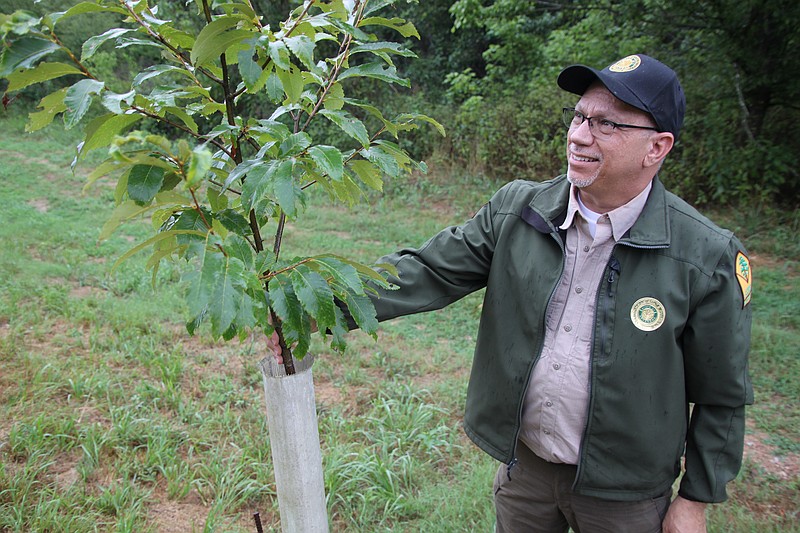 Surrounded by a tube to ward off gnawing animals, a young Ozark chinquapin so far is thriving in rocky, well-drained soil at Hobbs State Park, where Chris Pistole is a park interpreter. (Special to the Democrat-Gazette/Frank Fellone)

HOBBS STATE PARK — Al Knox has spent years here as a volunteer and trail supervisor. It was as a volunteer, in 2002, that he found the Ozark chinquapin.

The chinquapin is a tree in the chestnut family, a species mostly wiped out in America by an invasive blight from Asia.

Lots more about that soon. Back to Al Knox.

He was cutting weeds with a string trimmer in one area — a small area, given the park's 12,054 acres -- when he came across a bush. Not a tree. A bush.

Knox recognized the bush as an Ozark chinquapin, because he remembered eating the nuts from a tree as a boy. Knox is 87, found the chinquapin when he was 67, and ate those nuts a long time ago.

"I almost ran my face into the burrs," he said of the Hobbs discovery. "I recognized it as a chinquapin, which I had not seen in 50 years since I was a kid."

That bush and its burrs (fuzzy bundles in which the nut grows) became part of the effort to restore the Ozark chinquapin to its native habitat. Now, according to Steve Chyrchel, a park interpreter who Knox said knows more about the tree than anyone in Arkansas, the habitat is mostly Arkansas, with pockets in several surrounding states.

This, Chyrchel said, is Arkansas' tree.

Knox grew up eating those nuts in Bentonville. He still lives in Northwest Arkansas, in Prairie Creek not far from the park near Rogers.

"I'd fill my pockets with them and go to school. The girls loved them." Sometimes those nuts were his lunch.

No doubt he sometimes played hully gully. It's a game in which one player would shake the chinquapin nuts in his hands. Another player would guess how many. If he guessed right, Chyrchel said, he won the nuts.

That would be good luck.

The appeal of the Ozark chinquapin crosses generational lines. Elana Stroud, 27, volunteers at Hobbs in the chinquapin plots maintained by Chyrchel, park interpreter Chris Pistole and volunteers. She was inspired by "The Overstory," a novel by John Powers that won the Pulitzer Prize for fiction in 2019.

"It's like a 700-page fable," Stroud said. The first chapter is about chestnuts and the blight. Her curiosity led her to learn about the chinquapins at Hobbs.

New trees like the many saplings in the plots need to be watered, she said.

"They can be really sensitive and can die if they don't get enough water. It's hard work for such a simple task. It's rough out there when it's 100 degrees."

Stroud found herself drawn to the task. "It's a beautiful idea to bring back something that used to be here."

The bringing back appears doable. A happy ending is on the horizon.

Under the spreading chestnut tree, the village smithy stands ...

Blacksmiths aren't around much anymore. Same for chestnuts. A fungus, Cryphonectria parasitica, nearly wiped out those spreading chestnuts and, eventually, chinquapins.

Aren't fungi funny? Hey, "there's a fungus among us!" But Cryphonectria parasitica is not funny. It fed — still feeds — on whatever chestnut and chinquapin trees it can find. It is relentless, and has been since it came to this country from Asia in the early 1900s.

The disease it causes, chestnut blight, has killed an estimated 3 billion to 4 billion trees in the United States.

Fred Paillet is an adjunct professor of geoscience at the University of Arkansas, Fayetteville. He is, along with fellow professor Steven Stephenson, author of a book, "Ozark Forest Forensics: The Science Behind the Scenery in Our Regional Forests." It's published by the Ozark Society Foundation.

Paillet has studied the fungus and its effects. He's 75, grew up in Connecticut, and knows the devastation the fungus caused in the eastern United States: "It was like the Black Death in the Middle Ages. The trees got it and collapsed."

The blight was first discovered at the Bronx Zoo in 1904. By 1940, most American chestnuts were gone.

"It was exponentially lethal," Paillet said. "There was some hope that some trees had resistance, but for the American chestnut there was no resistance at all. The Ozark chinquapin has been so thoroughly ignored, but there's a suspicion it may have a little more resistance."

Chestnut trees spread naturally, Paillet said, and some chestnuts escaped to the forests of Wisconsin and Michigan "before the blight found it."

The blight kills the Ozark chinquapin above ground. Roots can survive, and most survivors in the wild look like a bush and not the 65-foot trees that once shaded hills in the Ozarks. A bush is what Al Knox found back in 2002.

At a plot of chinquapins at Hobbs State Park, limbs sprout above some of the bushes. The bushes look healthy; the taller sprouts are dead. Eventually, said Chris Pistole, a park interpreter involved in the effort to grow the trees, those trees not resistant to the blight will die.

Paillet has determined the blight came to Arkansas in 1957.

Chinquapin wood, he said, is exceptionally resistant to rot. He would search the woods for dead chinquapins.

"I would find a dead chinquapin and look at the rings of the nearest tree and see that in 1958 that tree started growing like mad because the shade of the chinquapins was removed. Those trees were mostly oaks."

Paillet knows of the work being done to restore the Ozark chinquapin. He's confident the effort will succeed.

"I think it's definitely accomplishable, because the material we have to work with is surviving. The key element is to test the material you're working with to see if it's resistant to blight.

"It's a difficult and expensive process. You propagate, then let it grow where it can stand some stress, then infect it with the blight to get rid of 99% of those trees that aren't resistant, and propagate the survivors.

"The challenge is to challenge your material with the blight."

What about grocery store chestnuts sold at the holidays?

"Those come from orchards of Chinese chestnuts in this country" and other countries, he said. "In China, they're like apples and pears and have been bred to produce." In fact, he said, there are about a half-dozen producing Chinese chestnuts at Veterans Park in Fayetteville.

There's another wrinkle to this story. The fungus has a disease that debilitates it, Paillet said. "The disease has a disease."

WHY ONE TREE MATTERS

Chyrchel talks about "the great Ozark love affair with the chinquapin." Part of the restoration challenge, he said, is that today "very few people know about the Ozark chinquapin."

To change that, he speaks, promotes, promulgates knowledge about the tree. One of Chrychel's public appearances this year was at the state convention in Springdale of Arkansas Master Gardeners with the Division of Agriculture Cooperative Extension Service.

Fortunately, he said, "it's difficult to wipe out a species," and so he and fellow interpreter Pistole and volunteers maintain three separate plots of the tree at Hobbs.

A main seed plot provides seeds for the Ozark Chinquapin Foundation, those seeds to be shared with foundation members. The other two are "out-plantings." Out-plantings are the placing of groups of four or so trees to re-establish the tree along its native range.

Some years ago the foundation gave Chyrchel frozen pollen from trees found in Missouri, Mississippi, Arkansas and Texas. He used that pollen to hand-pollinate one Hobbs tree that was producing much seed. That seed was given to the foundation, which then seeded its plots in Missouri. Only one of the 32 viable seeds survived. That tree, he said, after eight years of growth, last year produced more than 2,000 seeds.

Seeds at Hobbs are planted under a plastic tube to keep away hungry critters. A mesh is put on top to keep birds from falling in, dying, rotting and killing the tree. The tube stays in place until the tree is well grown.

The growing of chinquapins has spread to 10 state parks, he said. The Ozark Chinquapin Foundation provides the seeds and the expertise, and the parks provide the land and the management.

Why is this important, Chyrchel asked rhetorically. "It's just a tree. Who cares?"

His answer? The Ozark chinquapin was vital to the Ozarks. Acorns are now the main source of mast for wild animals, but they are susceptible to an early frost. "The chinquapin blooms in late May and early June when the chance of frost is gone."

As important, he said, is the quality of the nut. It has 31% more carbohydrates than a white oak acorn, 230% more protein and 380% more fat: "They're a super, super, super nutritious food source."

That nutrition works its way through the whole food chain, Chyrchel said, up to and including black bears, allowing mothers to have cubs every year.

Others do it, too, especially at the Ozark Chinquapin Foundation in Poplar Bluff, Mo. The foundation's president and founder is Steve Bost. He spoke by phone from his home in Missouri.

Established in 2007, the foundation gives seeds and growing instructions to members who want them across 16 states. Last year, he said, about 4,200 seeds were distributed. In Arkansas, seeds went to members but also to state parks, the Game and Fish Commission, the U.S. Forest Service and the Forestry Commission.

How close is the foundation to that 100% blight resistant tree?

"Our plan is to give [seeds] to your friends and relatives. By degrees, we're reversing the trend and the loss.

"When you restore a species, it's remarkable. We have trees in Missouri that are reforesting the area around them."

"This is like winning the Super Bowl," Bost added. "People don't realize what it took to get there. We're finding out that trees we have are better than the ones we created last year, two years ago, five years ago, 10 years ago."

That's reason for optimism. What about pessimism?

"I don't know," Bost said. "I've dealt with people who doubted the tree existed, said I was wasting my time. My whole life people have said no, the Ozark chinquapin is dead, gone.