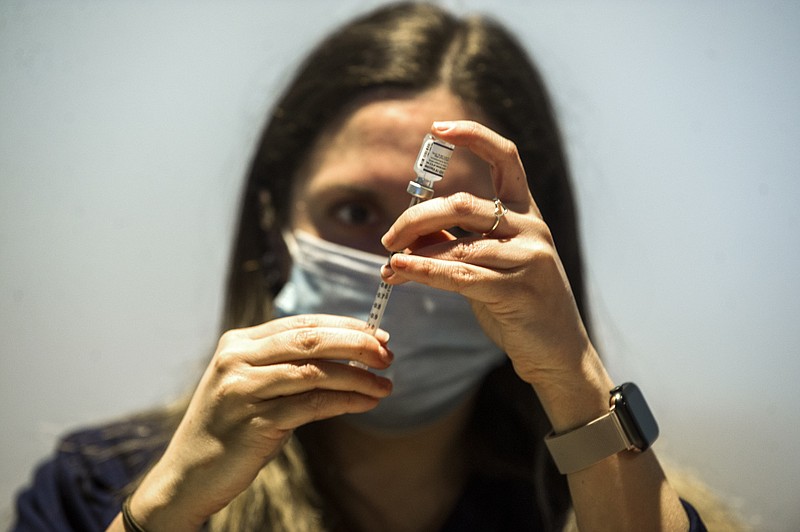 FILE — Rachel Honeycutt, a Pharmacy Technician, draws doses of the covid-19 vaccine during a vaccine clinic at the Mosaic Church on Colonel Glenn Road in Little Rock on Saturday, Jan. 22, 2022. (Arkansas Democrat-Gazette/Stephen Swofford)

Arkansas posted its largest increase in hospitalized covid-19 patients since mid-July on Monday even as the state's new cases numbers continued to decline.

The death toll, as tracked by the Department of Health, remained at 11,993.

Growing for the second day in a row, the number of covid-19 patients in Arkansas hospitals rose Monday by 22, to 294, the largest number since Sept. 1.

The increase was the largest in a single day since July 18.

While larger by 80 than the increase on Sunday, it was smaller by 14 than the one the previous Monday.

Already at its lowest level since the week ending June 15, the average daily increase in the state's case count over a rolling seven-day period fell Monday to 642.

At its lowest level since June 22, the number of cases in the state that were considered active fell by 187, to 8,550, as recoveries outpaced new cases.

After rising by five on Sunday, the number of the state's virus patients who were in intensive care remained Monday at 47.

Rising for the second straight day, the number on ventilators grew by one, to 19.