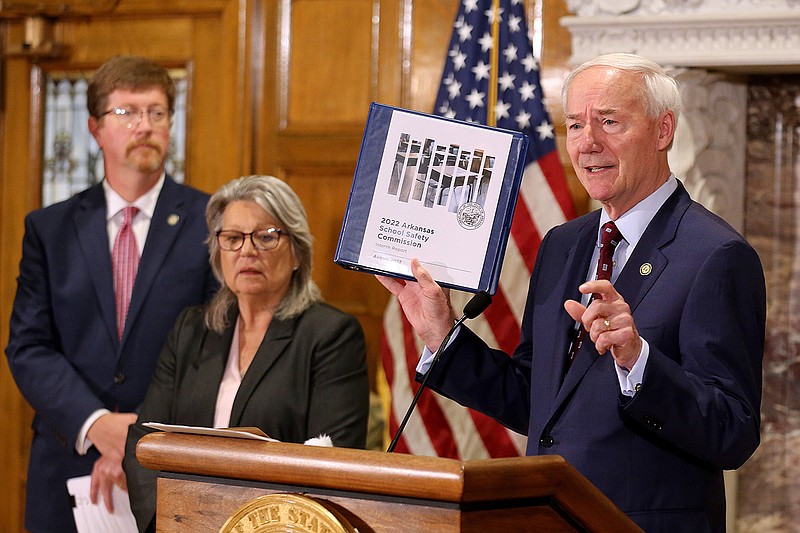 Gov. Asa Hutchinson, with state Education Secretary Johnny Key and Dr. Cheryl May, director of the Criminal Justice Institute, holds a copy of the initial report from the Arkansas School Safety Commission during a press conference on Tuesday, Aug. 2, 2022, at the state Capitol in Little Rock. (Arkansas Democrat-Gazette/Thomas Metthe)

The Arkansas School Safety Commission's final report is due in a little more than two weeks, and members are trying to find a balance between funding and accountability when it comes to safety recommendations for schools.

Dr. Cheryl May, director of the Criminal Justice Institute and head of the commission, said legislators have been interested in the commission's recommendations.

"We are considering a recommendation to provide ongoing funding to schools specifically for school safety," she told the Arkansas Democrat-Gazette on Friday. "Not sure if that recommendation will be discussed at our next or the final commission meeting."

The commission unanimously approved Tuesday another set of recommendations from its five subcommittees: mental health and prevention; law enforcement and security; audits, emergency operations plans and drills; physical security; and intelligence and communication.

• School resource officers having instant access to certain equipment in an active killer situation. The recommendation states a go-bag at minimum should include body armor, a ballistic helmet, forcible entry tools, medical first-aid and trauma kits. A commissioned school security officer also should receive proper instruction in the use of all listed items.

• Schools should develop strategies that layer and build redundancy for optimal security. These can include recruiting former certified law enforcement officers as auxiliary officers or commissioned school security officers, as well as offering space to local law enforcement to do work on campus which would allow there to be multiple officers on campus at any time.

• District campuses should have shatter-resistant film at school entrances, especially the main entrance.

• District campuses should have physical barriers such as bollards, landscaping, fencing, walls and more at school entrances, especially the main entrance.

Additional recommendations are expected in future meetings. The commission's final report is due by Oct. 1.

Republican Gov. Asa Hutchinson reinstated the School Safety Commission in June in the aftermath of several mass shootings across the nation and has said he hopes school districts will use the updated recommendations when making requests for funding. Legislators approved a $50 million grant program during a special session in August that will be used to address recommendations made by the commission.

The state's original school safety commission, created in March 2018, submitted 30 recommendations in its 124-page report. Some schools have implemented portions of the original recommendations, but schools are not mandated to follow the recommendations.

Under the governor's executive order, the current commission is charged with reviewing the previous commission's report and providing an update on the status of school safety across Arkansas.

As the commission's deadline nears, May said it's time to discuss how schools would be able to fund these recommendations.

"Those schools who completed the survey we sent out had an opportunity to submit an open-ended question, and I kid you not when I say 90% of the responses included something about funding," she told the committee last week. "Not every school district submitted an open-ended statement, but funding was just boom, boom, boom. It was like a flashing light."

May told the commission that since funding doesn't fit in either of the subcommittee's topics, it might be better for the members as a whole to come up with an idea to provide resources.

"The governor is making the $50 million available for pretty much onetime projects that are related to school safety," she said. "If you look at some of these things that we are asking them to do, these are ongoing amounts and not one time."

David Hopkins, superintendent for the Clarksville School District and a commission member, agreed it is time to address funding.

"We absolutely need some sort of mechanism in place I believe to continually provide schools the funds they need to put in place these recommendation that are not a onetime expenditure," he said. "Such as school resource officers, commissioned security officers and things of that nature that require continued costs year after year."

"Our whole mission is to help our schools to be successful in protecting our students and providing a safe and secure learning environment, but if we do not address the funding then we are not addressing the overall issue of helping our schools to succeed," he said. "We are almost putting unfunded recommendations in front of these schools."

Hopkins said he hopes that when Hutchinson and legislators go over recommendations they understand they can't be pulled out of thin air.

"When we ask for additional SROs and CSSOs, even though we don't pay a salary, there is training costs and licensing costs that need to be considered before legislators mandate something," he said.

May said the biggest expense will be physical security upgrades to facilities, but noted that the $50 million grant and federal grants might assist in this regard.

"Every subcommittee has come forward with all these free resources out there for schools to use," she said. "It's not like we are asking them, besides the physical securities part of it, to do things that cost a lot of money."

Tim Cain, director of the Division of Public School Academic Facilities and Transportation for the Arkansas Department of Education, said most of the physical recommendations will be addressed when a new school is built.

May said Friday that as far as changes to the physical building, the only recommendations that require this are vestibules for entrances, bollards and other physical barriers.

"The vestibule can be a heavy lift depending upon the age of the building and how it is laid out, but there are facility grants available to help, as well as some federal funding," she said. "There are other recommendations concerning door locks and access controls for doors that the $50 million grants can most certainly help cover."

Cain said there is also funding available from the state partnership program for facility security projects, including secured vestibules.

May said 233 of the 261 school districts already have at least one school resource officer on campus.

"The Office of Community Oriented Policing Services has a hiring grant program that does provide funding for hiring SROs," she said. "The amount of funding for the COPS hiring program has increased."

May said the biggest issue regarding school resource officers may be availability.

"There are tremendous shortages in law enforcement agencies across the state and serious recruitment and retention issues," she said. "The salary of a law enforcement officer or deputy does not come close to compensating them for the real risks they take every day for the community."

Cost for commissioned school security officers also can vary from district to district.

May suggested using the matrix system that provides funding to schools based on student population as a possible way to fund recommendations.

"We have got small and poorer schools who don't have an SRO or CSFO program because they can't afford it," she said. "It would be nice if there was some way that we could have there be a minimum amount of money given to schools for school safety to assist poorer and smaller schools get the resources we think are important."

Courtney Salas-Ford, chief legal counsel for the Division of Elementary and Secondary Education, said the matrix is a funding model and not a spending model, meaning if legislators choose to fund recommendations this way there are no restrictions on how it will be spent.

"If you want restrictive funding then it will have to be done in a different way," she said.

Committee members agreed funding will need to be addressed in the coming meeting.

"To me this is where the balance comes in," May told the committee. "We got to try to provide the resources that they need in order for them to get these things done, but also be able to make them be accountable for getting them done."

The question of accountability related to these recommendations is also something committee members are trying to figure out.

"In my opinion there is only one group of folks who can step in with that accountability that we need in this situation, and that is [the Division of Elementary and Secondary Education]," May said.

May noted that a recently completed survey by school districts showed that 48 districts have not provided floor plans to first-responding agencies. That was supposed to be done by Oct. 1, 2021, she said.

Helder said it's important to move forward with an accountability recommendation to ensure ideas are implemented.

"I love the idea of accountability," he said, "because if not we will be back here in four or five years looking over what we recommended and seeing what was actually done."