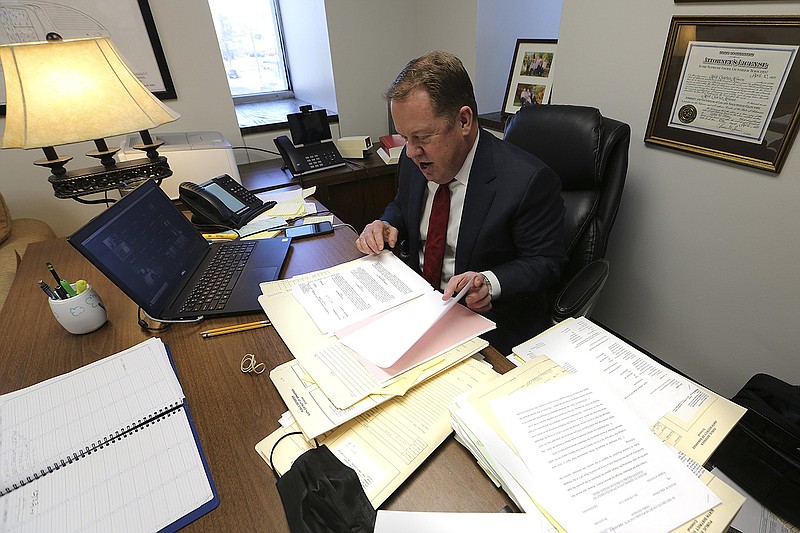 Public defender Kent Krause goes over case files between cases during court hearings via Zoom on Thursday, Feb. 10, 2022, in his office at the Pulaski County Administration Building in Little Rock. (Arkansas Democrat-Gazette/Thomas Metthe)

A state effort to bolster the ranks of public defenders and prosecutors has offered little relief to Pulaski County courts burdened by backlogs of felony cases, according to a circuit court judge.

Judge Cathleen Compton said Thursday that her court was still struggling to dispose of criminal cases that built up during the coronavirus pandemic. While state funds have allowed prosecutors and public defenders to hire additional part-time attorneys, Compton said the number of cases on her docket hasn't changed significantly since officials approved the funding in March.

Three weeks earlier, shortly after state officials extended funding for the extra staff, Compton said her court was still swamped with cases. "I just really hope that we get the extra help that we so desperately need," she said during a Sept. 1 interview.

The extra funding was in response to the swelling of dockets in several Arkansas judicial districts during the pandemic, when judges were forced to put trials on hold. At the same time, as attorneys struggled to dispose of cases during the trial hiatus, new defendants continued to enter the system, adding to the backlog.

For prosecutors, the case backlog has meant potentially delaying justice for crime victims. For some public defender offices, the stalled cases have pushed already high workloads far beyond the nationally recommended 150 felony cases per attorney per year. With caseloads reaching unprecedented levels during the pandemic, some public defenders worried they might not be able to effectively represent each of their clients.

Between March 1, 2020 and May 31, 2021, 58,840 felony criminal cases were filed statewide in Arkansas courts. As of mid-August, 15,471 of these cases had yet to be disposed of, according to data from the Administrative Office of the Courts contained in emails obtained by the Arkansas Democrat-Gazette. While prosecutors are responsible for each of these criminal cases, defendants are represented by both public defenders and private attorneys.

In March of this year, to help deal with the backlog, the state granted the Arkansas Public Defender Commission and the state Office of the Prosecutor Coordinator $1 million apiece, allowing each to hire up to 45 part-time attorneys. Since the initial round of funding was only intended to last a few months, state officials in August approved an additional $4.5 million in federal coronavirus relief funds to extend the positions by a year.

As of Wednesday, the Office of the Prosecutor Coordinator had $316,181.68 of its original $1 million in state funding. The Public Defender Commission had $335,737.99 left, according to Scott Hardin, spokesman for the Department of Finance and Administration.

The agencies plan to continue drawing from their initial pots of funding before turning to the recently approved coronavirus relief funds. State officials plan to release the federal funds quarterly as needed once the agencies exhaust their first round of funding, said Hardin in an email.

In some judicial districts, the funds have had a noticeable impact, allowing offices to offload significant numbers of aging cases onto newly hired part-time attorneys. But in other districts, the limits on the funding, pre-pandemic backlogs and a scarcity of attorneys interested in the temporary positions have left courts managing high caseloads with limited relief.

While Compton hoped the funding extension for the positions would help attorneys dispose of more cases, she expected courts would need more assistance.

"I think if we can get more public defenders, more prosecutors and two or three retired judges we might be able to break that backlog," she said.

Prosecutors in Pulaski County did not return phone call requests for comment.

Mac Carder, the district's chief public defender, answered a phone call on Thursday but said he was unavailable to comment at the time. Carder said he planned to make time in his workload to return the call but could not be reached by subsequent phone calls before print deadline.

Prosecutors in the Sixth Judicial District, which covers Pulaski and Perry counties, became eligible to hire seven part-time positions, five of which were filled as of late August, according to Bob McMahan, the state prosecutor coordinator.

Gregg Parrish, executive director for the Arkansas Public Defender Commission, did not respond to multiple phone calls and email requests for comment.

Public defenders in the Sixth Judicial District were allowed to hire at least nine part-time attorneys, according to an Aug. 18 report obtained by the Arkansas Democrat Gazette through a freedom of information request. Eight of the positions were filled and one had been formerly filled at the time the report was compiled.

Carder wrote in an Aug. 11 email obtained by the Democrat Gazette that public defenders in all the criminal divisions in his district were asking him weekly about bringing on additional part-time attorneys.

Earlier, in a July 26 email, Carder noted that a part-time attorney hired to address covid backlog cases and two full-time attorneys had left his office. The vacancies meant public defenders in Pulaski County's 1st Division Circuit Court had to shoulder even higher caseloads.

"The three remaining attorneys in 1st ... have absorbed the two full time attorney's caseloads, as well as the extra help cases that [the part-time attorney] returned," wrote Carder. "They are concerned about Monday's docket and being so overloaded it could hinder their effectiveness of representation."

Across Arkansas, the part-time positions have had mixed results in addressing the case backlog.

Since state officials approved the funding, prosecutors in 22 of the state's 28 judicial districts have sent McMahan requests for part-time attorneys. After Pulaski and Perry counties, the Fourth Judicial District, which encompasses Washington and Madison counties, received the second-most part-time attorneys, with four approved positions. Two of these positions were filled as of late August.

The additional positions have made an appreciable difference in the caseloads of prosecutors in at least three districts, McMahan said in an interview late last month.

He pointed to the 13th Judicial District, where two temporary attorneys were handling a total of around 150 cases that would have otherwise gone to staff attorneys. In Washington County, McMahan knew of one covid-relief attorney who had disposed of roughly 250 cases. In Benton County, an attorney was handling around 60 cases.

"That's quite a bit of progress," he said.

In Benton County, rapid population growth has added to the strain caused by the pandemic. As more people flocked to Northwest Arkansas, the number of crimes and defendants in courts likewise increased.

To address the backlog, Prosecutor Nathan Smith hired two part-time attorneys thanks to the state funds. One of the attorneys has since left to work for Walmart -- "the scourge of Benton County is that I train Walmart's legal department," said Smith -- but the remaining attorney is managing 60 to 70 felony cases.

"That matters," said Smith on Sept 13. "It puts us in the position of being able to handle the backlog and also deal with what's coming in."

Prior to hiring the coronavirus-relief attorneys, Smith said, his attorneys would commonly handle 200 to 250 active felonies.

When Smith's counterpart Jay Saxton, chief public defender, first heard of the plan to fund part-time attorney positions, he thought his office wouldn't be able to find candidates given the state's parameters.

But since then, he has managed to hire four part-time attorneys. One has left his office, but Saxton said the remaining attorneys "have been a dramatic help to us."

All four attorneys were highly experienced and capable of managing serious felony cases. Saxton estimated the part-time hires had disposed of at least 100 cases.

Even with the part-time hires, however, Saxton said attorneys in his office were dealing with significantly more than the annual 150 felony cases per public defender recommended by the National Advisory Commission on Criminal Justice Standards.

Saxton said he wasn't aware of any public defender office in the U.S. that is meeting the standard and said that his attorneys were capable of handling their caseloads.

But he noted that to maintain their workloads, he and his attorneys were having to visit clients in jail weekends and bring work home in the evenings.

"It's just a normal habit for us," said Saxton. "That's not manageable over a long period of time. That's why public defender offices lose their public defenders fairly quick, it's because it's a grueling job to have."

In the Fourth Judicial District, which covers Washington and Madison counties, the public defenders office was allowed to hire four part-time attorneys. As of Friday, the office had filled two of the positions and expected to fill the remaining two soon with attorneys who recently passed the bar, said Leana Houston, chief deputy public defender.

Houston was uncertain of exactly how many cases on average public defenders in her office were handling.

She said the caseloads had decreased since March but noted that attorneys were still struggling to manage serious felony cases such as murders. These cases, which can last months or years and require experienced attorneys, form the bulk of the case backlog in the Fourth Judicial District, according to Houston.

Earlier this year, Houston said, attorneys in her office were managing on average 300 felony cases. At one point, a public defender was handling 526 felonies, 30 of which could result in a defendant facing 10-40 years or life in prison.

Many of the attorneys who were interested in the part-time positions were young and lacked experience, said Houston. Although these attorneys are able to handle lower-level felonies, they were not certified to address the serious felonies that put a strain on her office, Houston said.

During the past two years, Houston said, her office and the prosecuting attorney's office in Washington County have seen turnover rates of more than 50%. With veteran attorneys leaving their posts, Houston said her remaining staff has had to manage the additional cases while training new hires.

In northeast Arkansas, Brian Miles, the Jonesboro-based public defender for the Second Judicial District, said state-funded positions have done little to cut into his backlog.

While he was able to hire one part-time attorney for a short time, Miles said it wasn't possible to bring the attorney up to speed on the cases responsible for the backlog.

"Although we appreciated the extra help, it was not an answer to our situation," said Miles. "The system was already backlogged prior to covid-19 and the pandemic only made it worse ... adding a temporary attorney for a two-month period did little to alleviate the impact of covid on the trial docket."

Public defenders were managing on average 189 felony clients in the Second Judicial District as of Monday. Many of these clients had multiple cases against them. On top of the felony cases, attorneys are also managing juvenile cases, adult protective services and other duties, according to Miles.

The highest-paid part-time public defender in Miles' four-county district has a salary of $56,499, while the top-earning part-time prosecuting attorney receives $84,333, according to Miles.

Miles noted there was benefit to bringing on a part-time attorney: Once the relief attorney's tenure ended, Miles was able to hire him for a part-time position that had sat vacant since March.