Hundreds evacuated from flooding as rain continues by Compiled by Democrat-Gazette staff from wire reports | September 19, 2022 at 7:08 a.m. 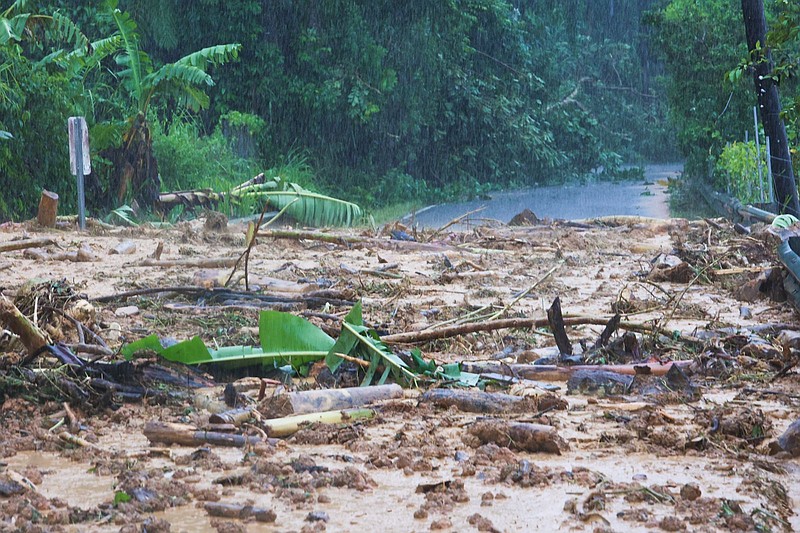 HAVANA -- Hurricane Fiona struck Puerto Rico's southwest coast on Sunday as it unleashed landslides, knocked the power grid out, and ripped up asphalt from roads and flung the pieces around.

Hundreds of people were evacuated or rescued across the island as floodwaters rose swiftly. Rushing rivers of brown water enveloped cars, first floors and even an airport runway in the island's southern region.

Forecasters said the storm threatened to dump "historic" levels of rain on Sunday and Monday, with up to 30 inches possible in eastern and southern Puerto Rico.

"The damages that we are seeing are catastrophic," said Gov. Pedro Pierluisi.

The storm washed away a bridge in the central mountain town of Utuado that police say was installed by the National Guard after Hurricane Maria hit in 2017. Large landslides also were reported, with water rushing down big slabs of broken asphalt and into gullies.

Fiona was centered 45 miles south-southeast of Punta Cana, Dominican Republic with maximum sustained winds of 85 mph on Sunday night, according to the U.S. National Hurricane Center. It was moving to the west-northwest at 10 mph.

Fiona struck on the anniversary of Hurricane Hugo, which hit Puerto Rico 33 years ago as a Category 3 storm.

The storm's clouds covered the entire island and tropical storm-force winds extended as far as 140 miles from Fiona's center.

U.S. President Joe Biden declared a state of emergency in the U.S. territory as the eye of the storm approached the island's southwest corner.

"The current weather conditions are currently extremely dangerous and are hindering our capacity to evaluate the situation," he said. "We will begin the re-establishment efforts as soon as it is safe."

Restoring power service for the entire island could take several days, Sorrentini said. The storm could also make some places hard to access, making it difficult to make repairs.

"Current weather conditions are extremely dangerous and are hindering our capacity to evaluate the complete situation," it said, adding that it could take several days to fully restore power.

Health centers were running on generators -- and some of those had failed. Health Secretary Carlos Mellado said crews rushed to repair generators at the Comprehensive Cancer Center, where several patients had to be evacuated.

Nearly 196,000 clients lost potable water service, in part, as a result of the power outage, the Puerto Rico Aqueducts and Sewers Authority announced. The agency had almost 150 generators operating to help bring water to nearly 160,000 clients.

The heavy rains, flooding and damaged infrastructure caused over 1,000 people to take refuge in more than 100 shelters across the island.

More than 3,000 homes still have only a blue tarp as a roof, and infrastructure remains weak, including the power grid. Outages remain common, and reconstruction started only recently.

"I think all of us Puerto Ricans who lived through Maria have that post-traumatic stress of, 'What is going to happen, how long is it going to last and what needs might we face?'" said Danny Hernandez, who works in the capital of San Juan but planned to weather the storm with his parents and family in the western town of Mayaguez.

He said the atmosphere was gloomy at the supermarket as he and others stocked up before the storm hit.

"After Maria, we all experienced scarcity to some extent," he said.

The storm was forecast to pummel cities and towns along Puerto Rico's southern coast that have not yet fully recovered from a string of strong earthquakes starting in late 2019.

More than 1,000 people with some 80 pets had sought shelter across the island by Sunday night, the majority of them in the southern coast.

Ada Vivian Roman, a 21-year-old photography student, said the storm knocked down trees and fences in her hometown of Toa Alta.

"I'm actually very anxious because it's a really slow-moving hurricane and time does not move," she said. "You look at the clock and it's still the same hour."

She said she is also worried about whether the public transportation she relies on to get to her job at a public relations agency will be operating by the time she has to go back to the office.

"But I know that I'm privileged compared with other families who are practically losing their homes because they are under water," she said.

In the southwest town of El Combate, hotel co-owner Tomas Rivera said he was prepared but worried about the "enormous" amount of rain he expected. He noted that a nearby wildlife refuge was eerily quiet before the storm hit.

"There are thousands of birds here, and they are nowhere to be seen," he said. "Even the birds have realized what is coming, and they're preparing."

Rivera said his employees brought bedridden family members to the hotel, where he has stocked up on diesel, gasoline, food, water and ice, given how slowly the government responded after Hurricane Maria.

"What we've done is prepared ourselves to depend as little as possible on the central government," he said.

"What worries me most is the rain," said forecaster Ernesto Morales with the National Weather Service in San Juan.

The island may get 12 to 18 inches of rain with a local maximum of 30, particularly in the south and southeast regions, the NHC said at 5 p.m. Fiona's sustained winds are 85 mph, and it's expected to continue strengthening as it moves from very close to Puerto Rico's southwest coast toward the Dominican Republic. Fiona is forecast to become a Category 2 hurricane in 24 hours or less with 100 mph winds.

"If you are watching us from Puerto Rico, please stay indoors," NHC acting director Jamie Rhome said in a live transmission before the outage.

The hurricane -- moving at nearly 9 mph -- will be a two-day event, and many will likely have to stay put until at least tonight, Ernesto Rodriguez, a meteorologist for the National Weather Service in San Juan, said on Sunday afternoon.

"We are expecting significant and even catastrophic flooding in those areas," Rodriguez said.

Nearly the entire island is under a flash flood warning. Several rivers across are no longer contained within their riverbanks or have been receiving so much rain they could eventually overflow.

In the mountain town of Utuado, which was cut off from the world during Hurricane Maria, the island's police reported a bridge falling down. A video shared on Facebook by local reporter Zugey Lamela shows the Río Grande de Arecibo bringing down the bridge that was built to replace the one that Hurricane Maria tore down.

Meanwhile, the mayor of the mountain town of Barranquitas said on local radio station WKAQ that a house had collapsed. The house, he added, was unoccupied.

The eye of the storm made landfall in southwest Puerto Rico, which was devastated by a string of earthquakes, including a magnitude 6.4 quake, in early 2020. The quakes destroyed schools, businesses and homes.

Dagnes Lopez, a community leader from the region, moved to the town of Lajas from her home in Barrio Fuig, in the nearby municipality of Guanica, after her home was destroyed during the 2020 earthquakes. During Fiona's arrival, she said the region has seen a lot of wind and rain already.

She is worried about her former neighborhood because if the nearby river overflows its banks, they will lose access in and out of the community. There are several houses that are still in ruins, including her old home. She said the government responds only to situations when "things get hard," and doesn't take preventative steps to address emergencies, such as cleaning up rivers before a storm.

"My house looks like the earthquakes happened yesterday," she said.

There are 125 shelters open with over 1,000 people. All flights in and out of the island are also canceled.

In Haiti, where days of violent protests and looting have brought the country to a standstill, emergency responders were trying to prepare as best as they could given blocked roads and the ongoing volatile situation.

"This system is going to dump a lot of rain despite the fact that it is veering north and the eye is not aiming at Haiti," said Jerry Chandler, who heads Haiti's disaster response agency, the Office of Civil Protection.

Chandler told the Herald that the flood- and mudslide-prone country that shares the island of Hispaniola with the Dominican Republic is expecting rain in the Northwest, the North and the Artibonite Valley.

A hurricane warning was posted for the Dominican Republic's eastern coast from Cabo Caucedo to Cabo Frances Viejo.

Fiona previously battered the eastern Caribbean, killing one man in the French territory of Guadeloupe when floods washed his home away, officials said. The storm also damaged roads, uprooted trees and destroyed at least one bridge.

St. Kitts and Nevis also reported flooding and downed trees, but announced its international airport would reopen on Sunday afternoon.

In the eastern Pacific, Tropical Storm Madeline was forecast to cause heavy rains and flooding across parts of southwestern Mexico. The storm was centered about 155 miles south-southwest of Cabo Corrientes on Sunday, with maximum sustained winds of 45 mph.

Information for this article was contributed by Danica Coto of The Associated Press and by Syra Ortiz Blanes, Omar Rodriguez Ortiz, Jacqueline Charles, David J. Neal and Grethel Aguila of The Miami Herald. 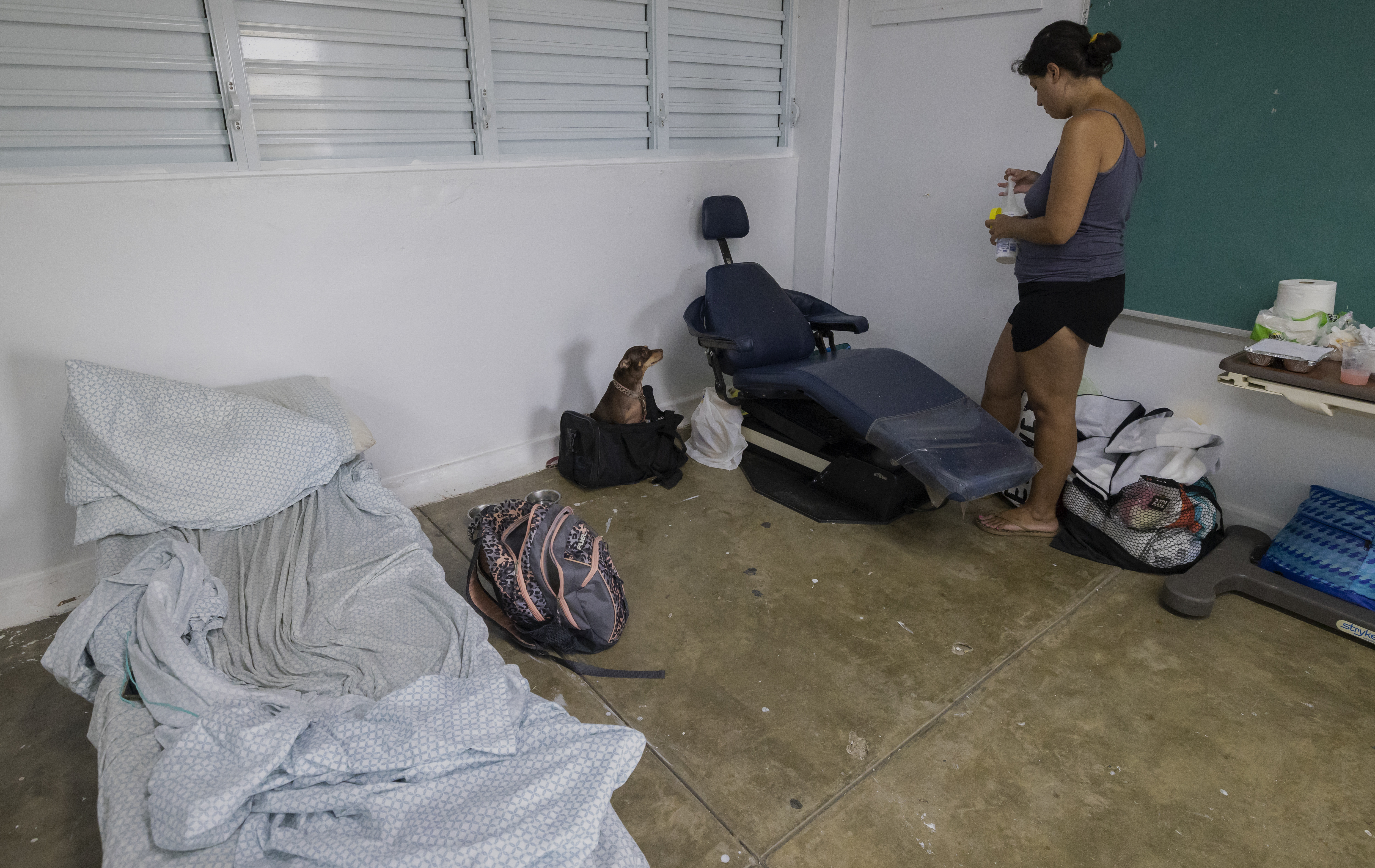 A woman and her dog take refuge in a shelter from Hurricane Fiona in Loiza, Puerto Rico, Sunday, Sept. 18, 2022. (AP Photo/Alejandro Granadillo) 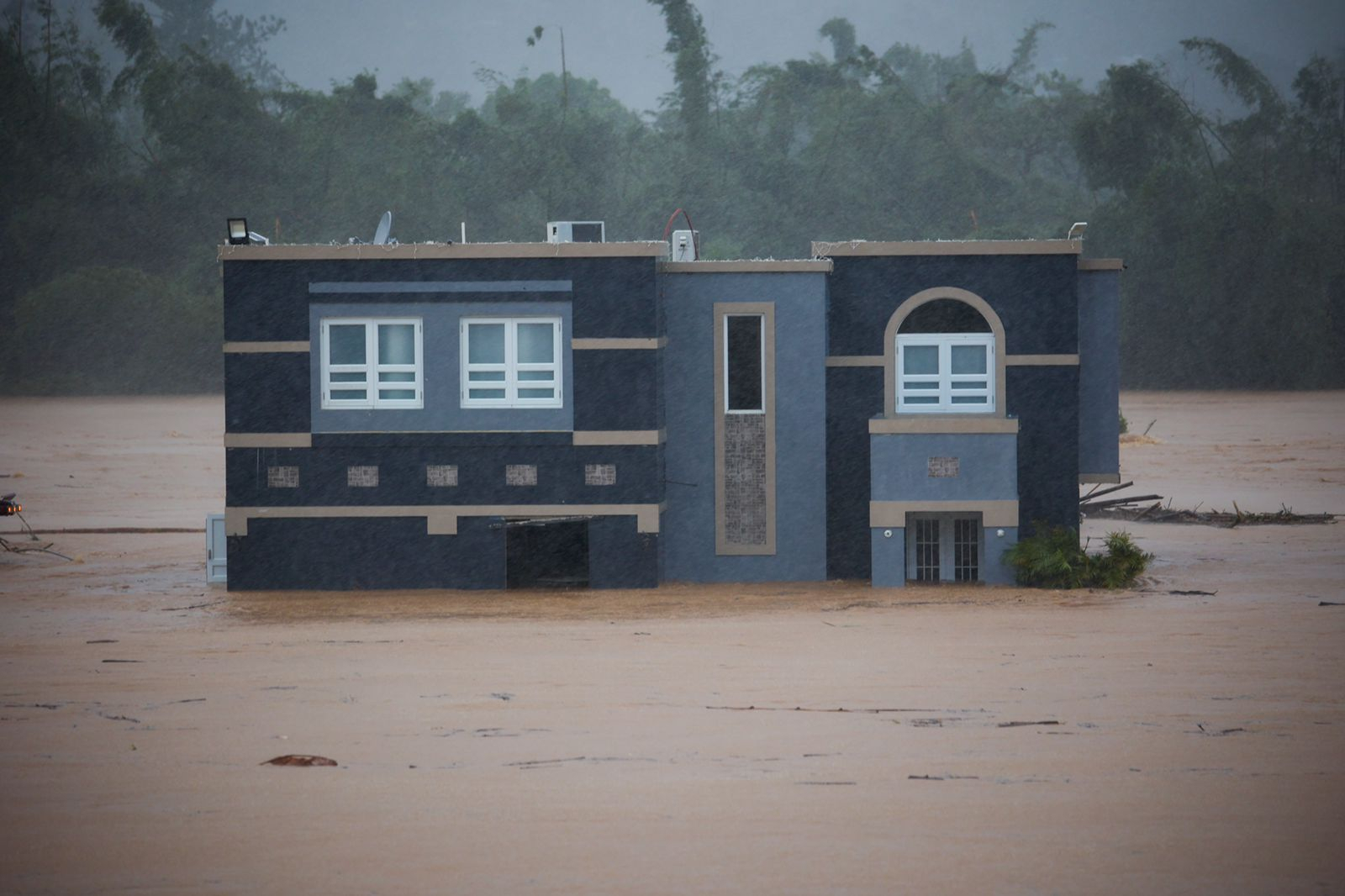 A home is submerged in floodwaters caused by Hurricane Fiona in Cayey, Puerto Rico, Sunday, Sept. 18, 2022. According to authorities three people were inside the home and were reported to have been rescued. (AP Photo/Stephanie Rojas) 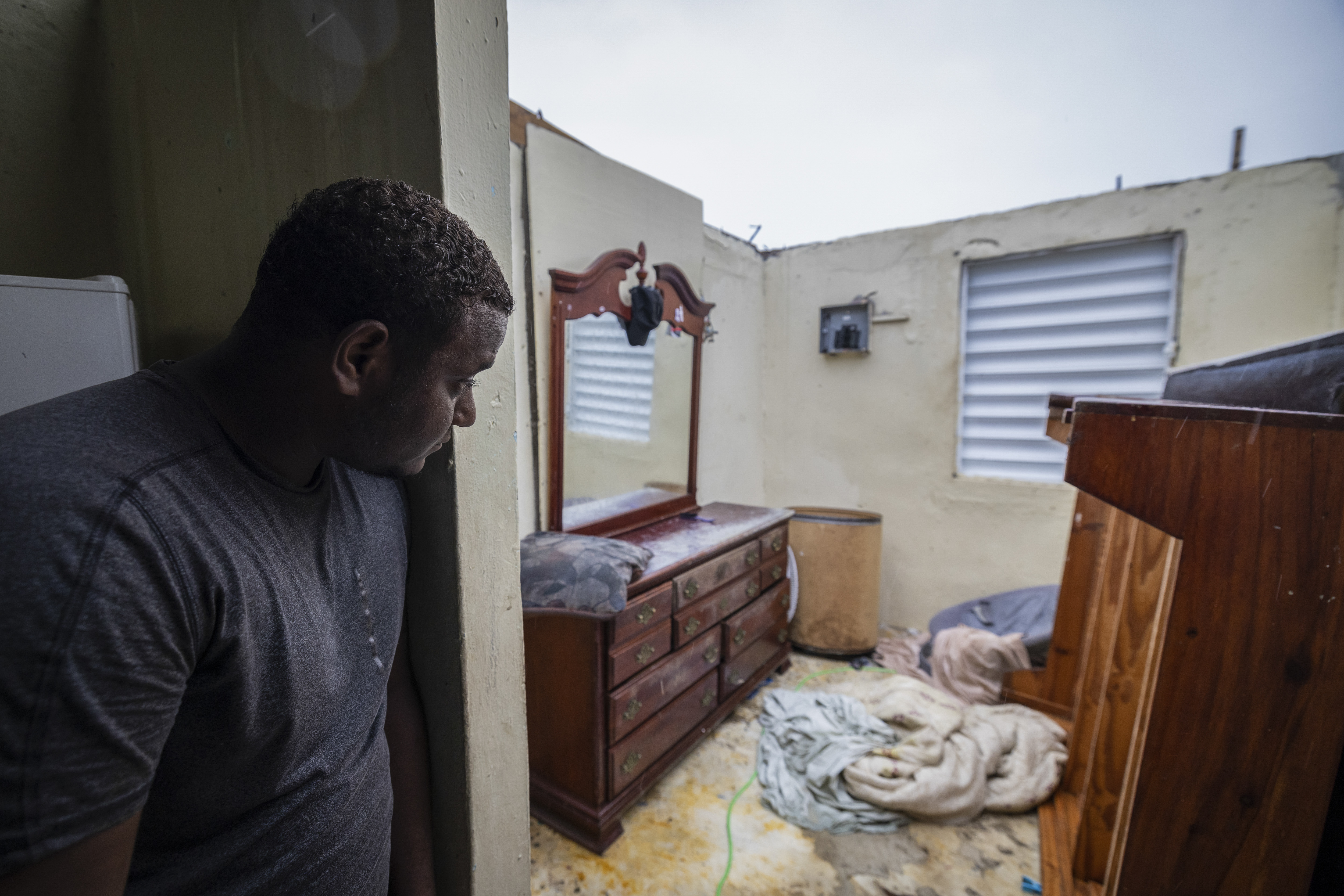 Nelson Cirino sees his bedroom after the winds of hurricane Fiona tore the roof off his house in Loiza, Puerto Rico, Sunday, Sept. 18, 2022. (AP Photo/Alejandro Granadillo) 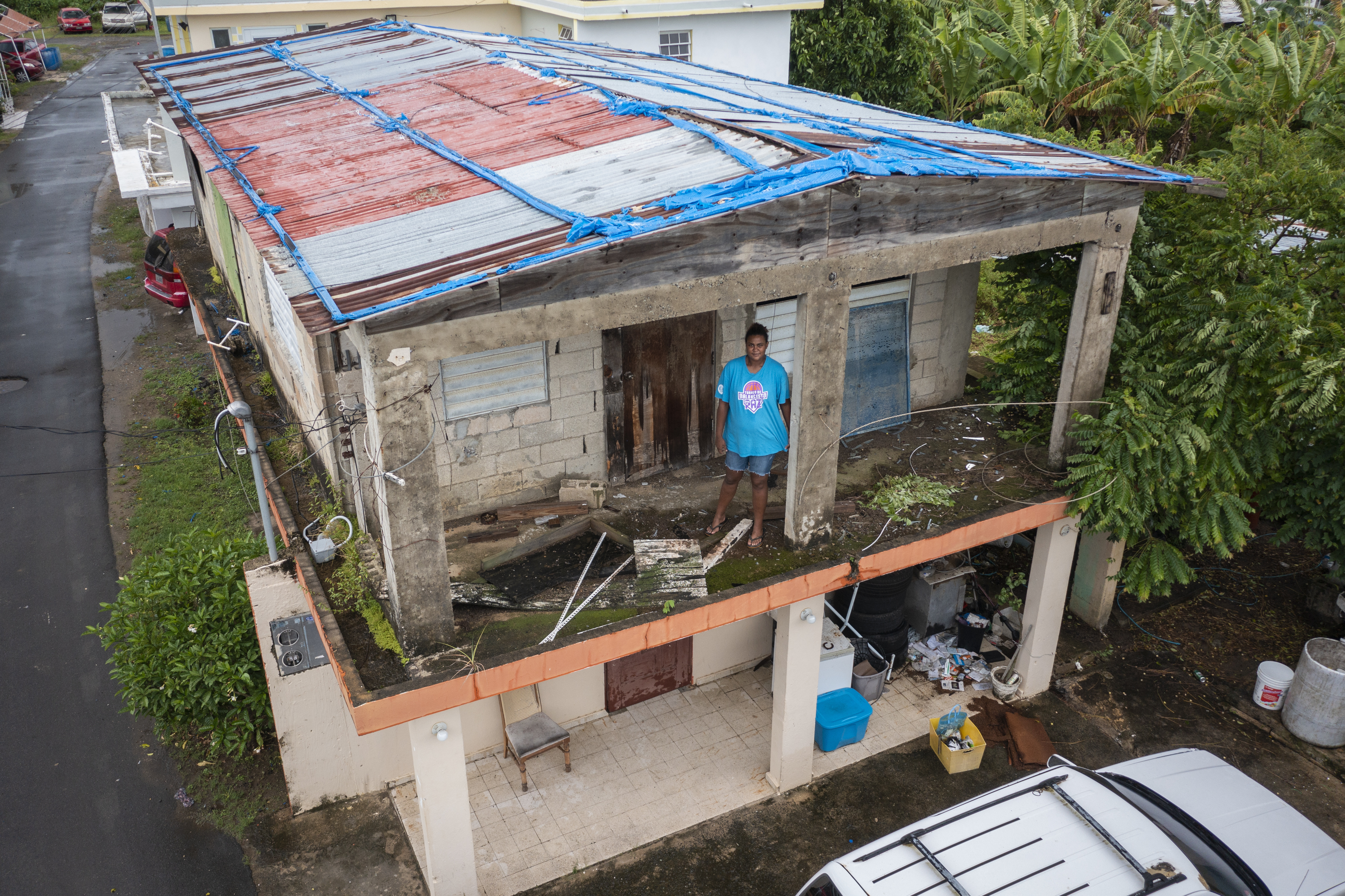 Jetsabel Osorio stands in her house damaged five years ago by Hurricane Maria before the arrival of Tropical Storm Fiona in Loiza, Puerto Rico, Saturday, Sept. 17, 2022. Fiona was expected to become a hurricane as it neared Puerto Rico on Saturday, threatening to dump up to 20 inches (51 centimeters) of rain as people braced for potential landslides, severe flooding and power outages. (AP Photo/Alejandro Granadillo) 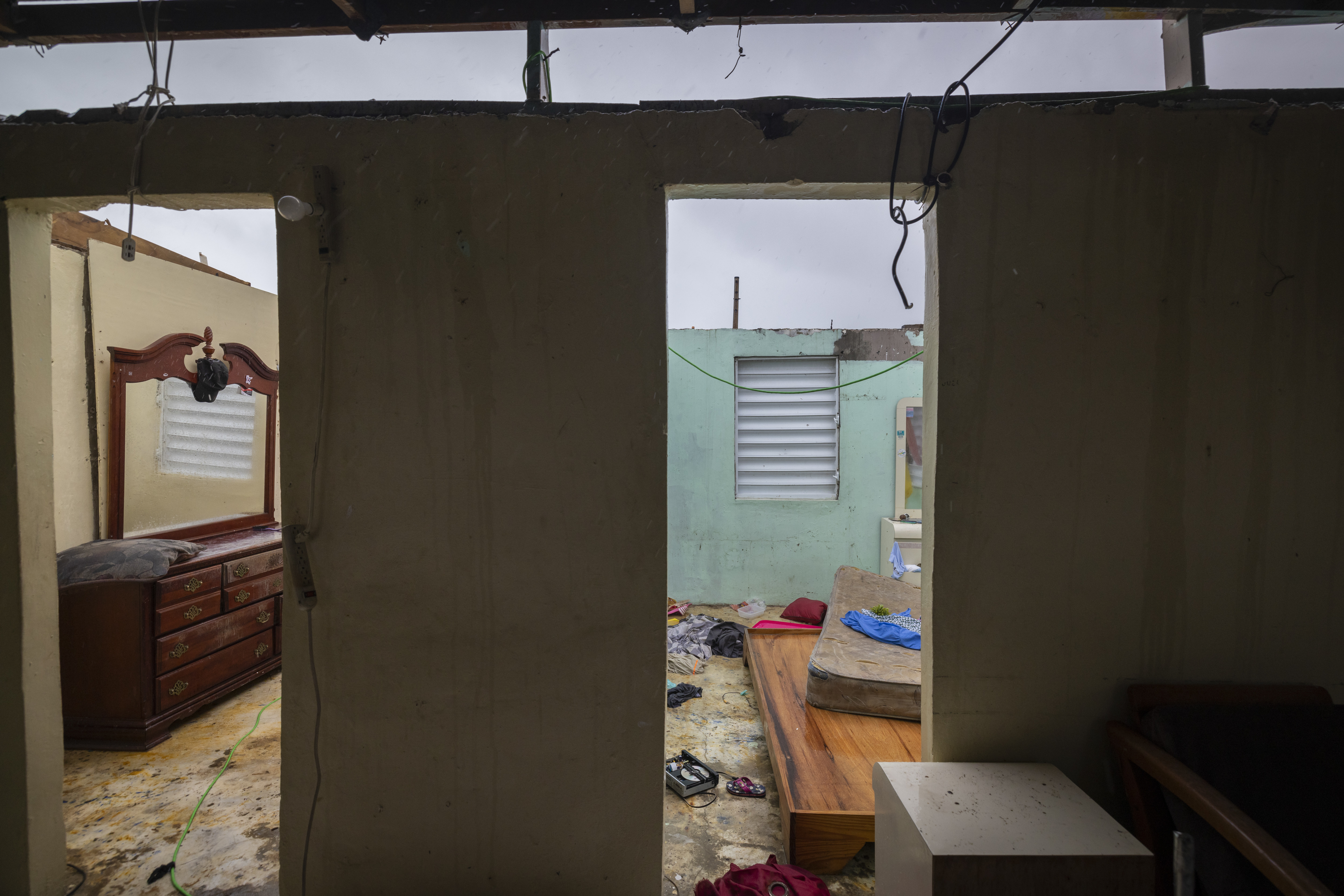 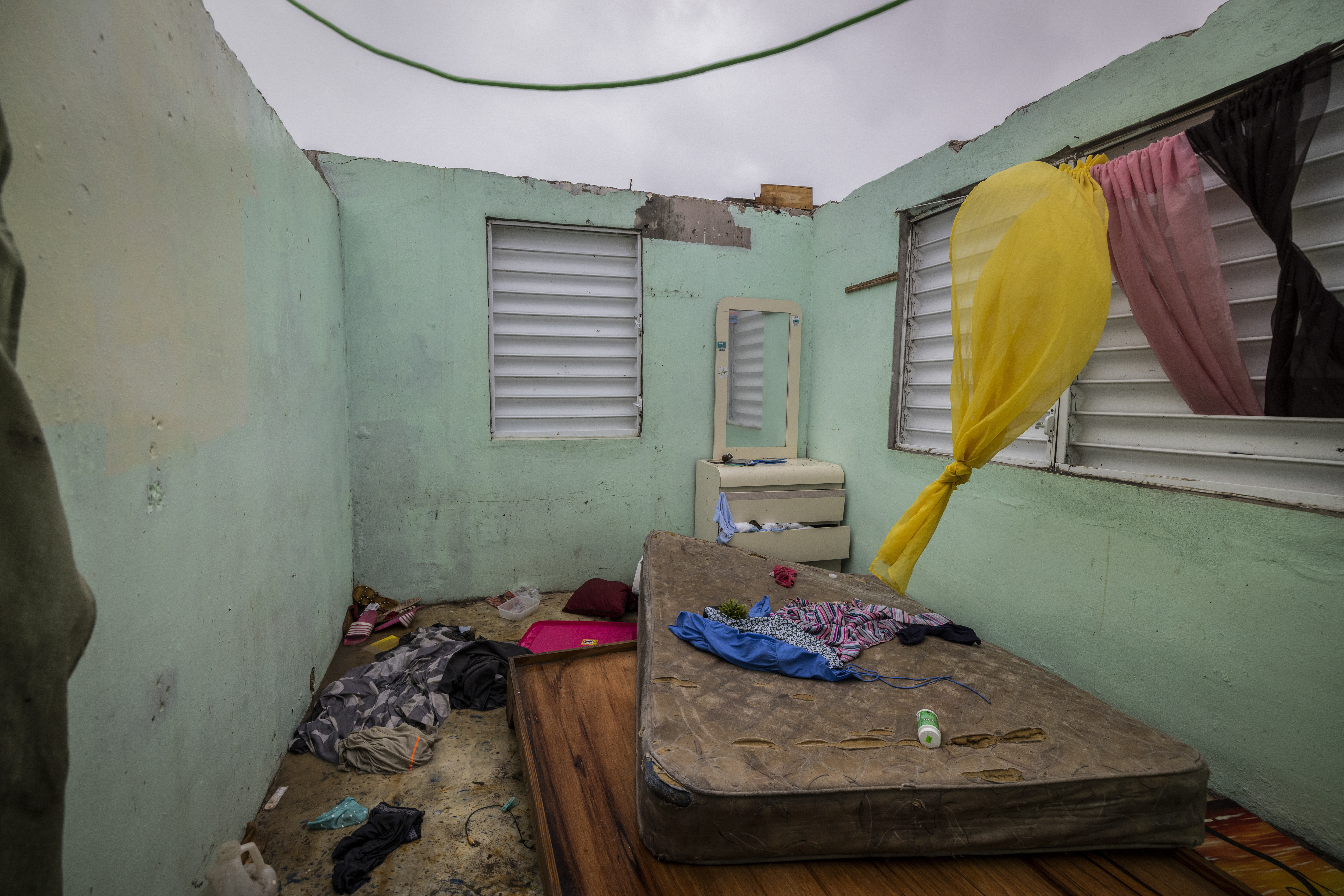 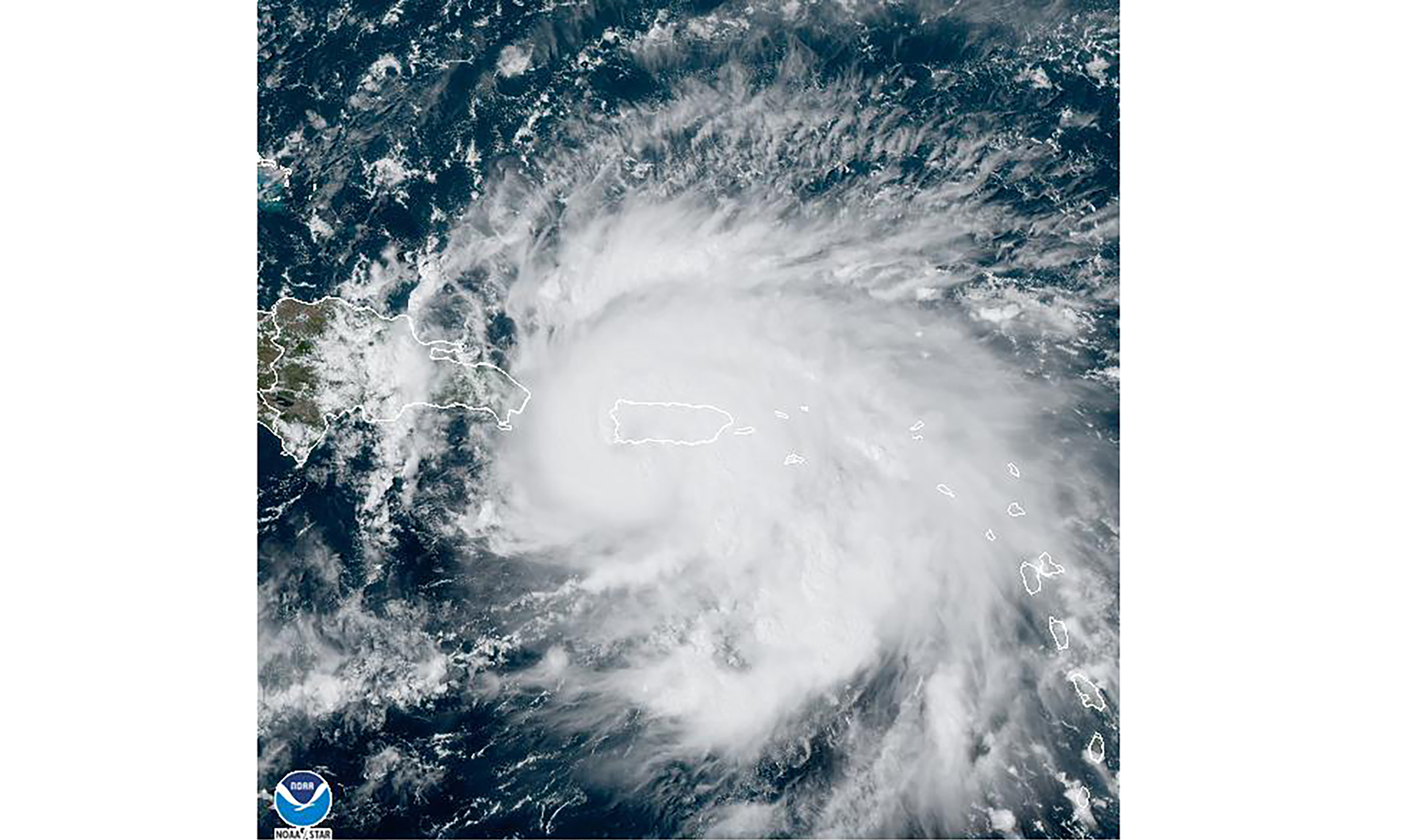 This satellite image provided by NOAA shows Hurricane Fiona in the Caribbean on Sunday, Sept. 18, 2022. The eye of newly formed Hurricane Fiona is near the coast of Puerto Rico — and it has already sparked an island-wide blackout and threatens to dump “historic” levels of rain. (NOAA via AP) 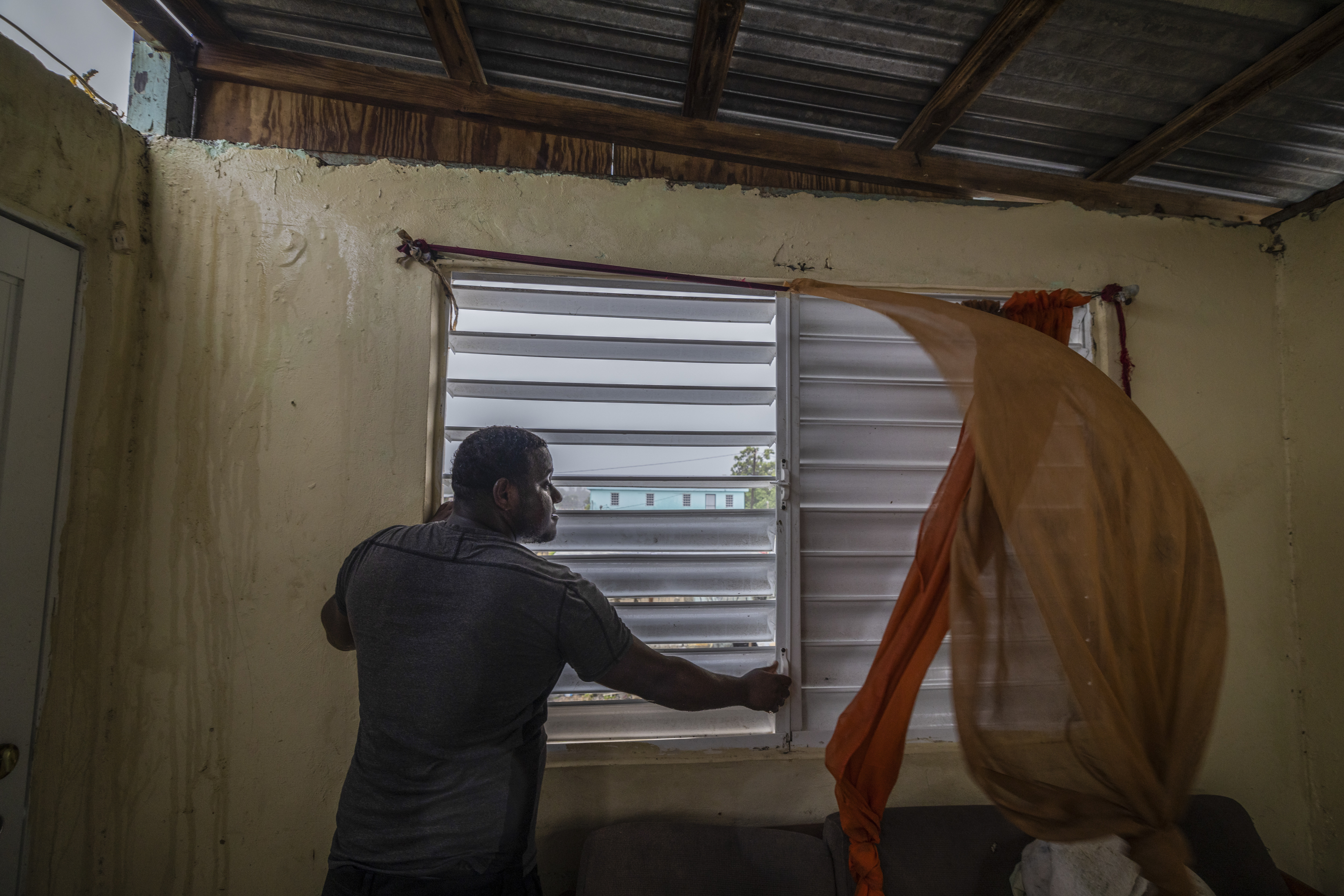 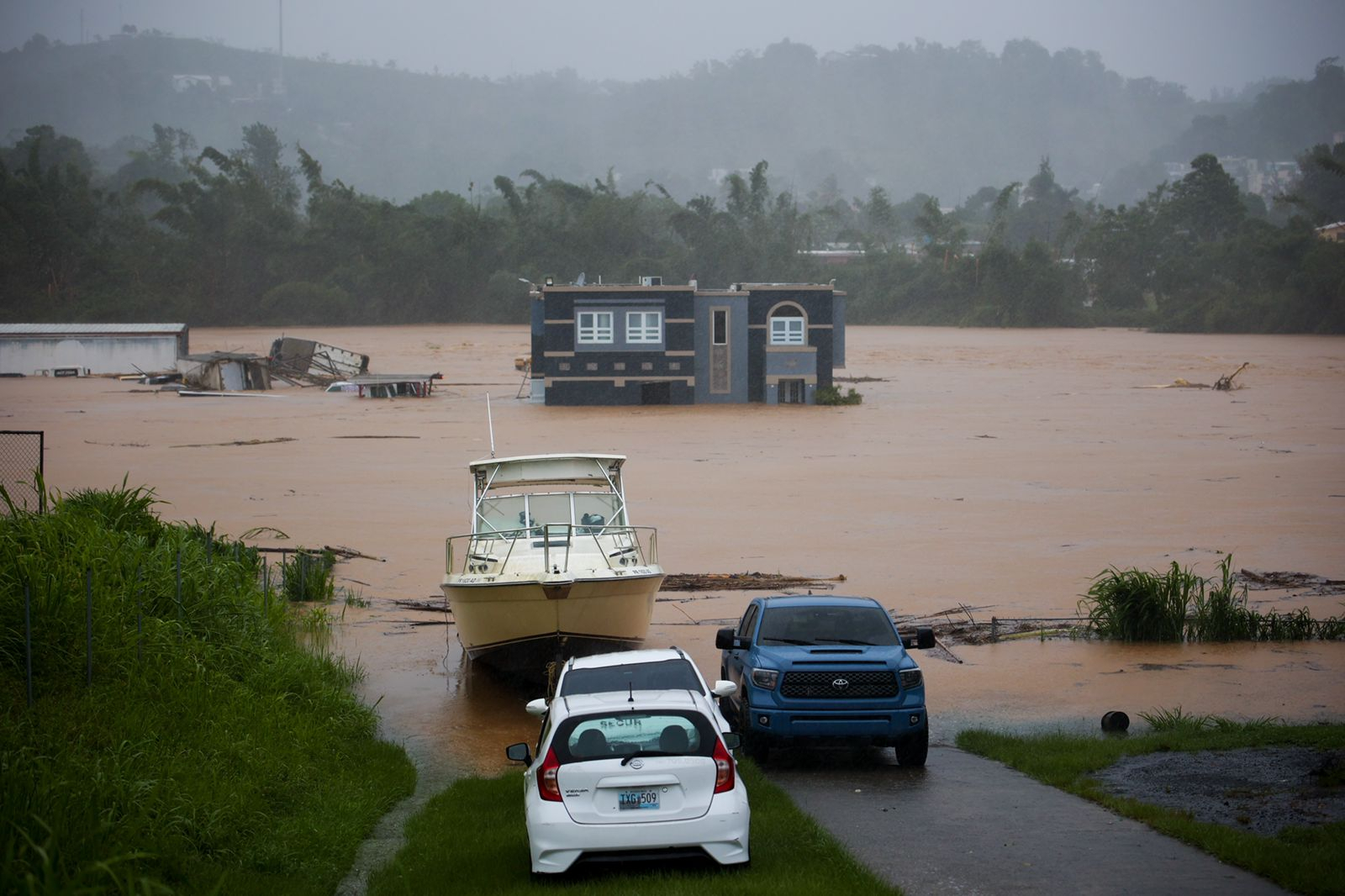