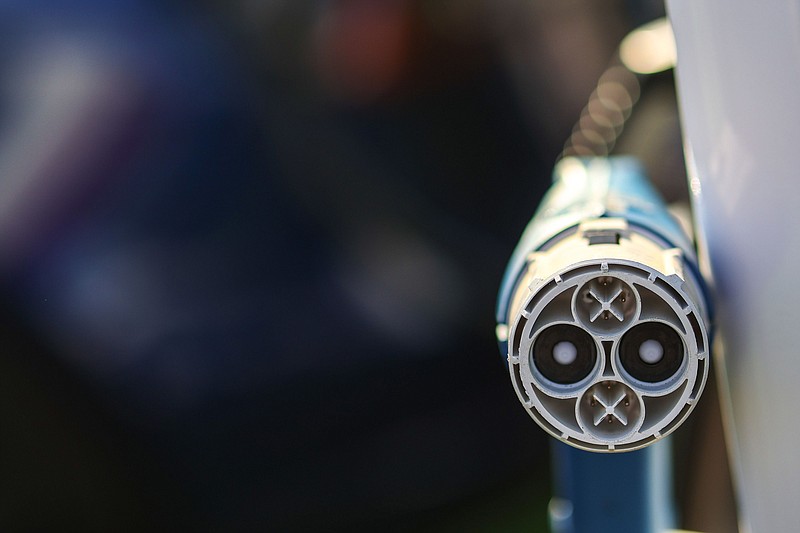 An electric-vehicle charging plug in Germany. MUST CREDIT: Bloomberg photo

Global leaders Daimler Truck Holding AG and Volvo AB are joining dozens of commercial-vehicle makers in Germany this week to showcase their latest electric semitrucks, with more zero-emissions vehicles debuting at the IAA Transportation show than ever.

Daimler is unveiling the Mercedes-Benz eActros LongHaul, capable of hauling 22 tons of cargo for 311 miles before it needs to recharge. Traton SE's Man brand is showing off a 40-ton truck that will accommodate fast charging. Sweden's Volvo is offering visitors test drives of its electric rigs.

The key question executives will have to answer is just how long it will take for their heavy-duty vehicles to make the jump from show floor to cruising along highways. High battery prices and a virtually nonexistent truck charging network remain significant hurdles as haulers weigh investments during an unprecedented energy crisis in Europe and a slowing global economy.

"A lot more electric trucks are available now, but their adoption is lagging behind, especially in Europe," said Nikolas Soulopolous, an analyst at BloombergNEF. "Production capacity is still ramping up slowly, there are not enough suitable public chargers available and truck batteries remain expensive."

Still, there's pressure to make the shift. Companies in Europe need to comply with tighter rules on trucks operating in urban areas as cities push to improve air quality. Also, electrifying heavy-duty vehicles will be key for tackling climate change; they're responsible for around a quarter of the European Union's road transport emissions.

"We're confident about these trucks," Karin Radstrom, chief executive of the Mercedes-Benz truck brand, said Monday while presenting the new vehicle at the IAA. "We want to drive this transition."

Brussels wants the industry to cut carbon-dioxide output of new trucks 30% by 2030, and most manufacturers are betting that battery-electric -- rather than hydrogen fuel cells -- will be the dominant technology to achieve that. Yet the majority of countries in the region aren't offering anything close to the $40,000 incentives the United States plans to dole out to buyers of an electric heavy-duty truck.

Traton, owned by Volkswagen AG, has pledged that half of its trucks shipped by the end of this decade will run without fossil fuels. Its Scania brand this year delivered an 80-ton electric truck to forest company SCA, which is using the vehicle to haul timber in northern Sweden. Last week, Volvo started series production of its heavy-duty electric rigs and said it has sold more than 2,600 battery-powered trucks.

"For some use cases, in particular shorter urban duty cycles, the total cost of ownership of battery-electric trucks can soon be as low as that of a diesel vehicle," Soulopolous said.

Timelines for series production vary as manufacturers struggle to ramp up capacity and battle to source enough parts.

Daimler's eActros LongHaul won't be mass-produced until 2024, with Man's rig due a year later. Nikola Corp., which plans to unveil its fuel-cell Tre FCEV Beta at this week's show, has delivered only a few dozen trucks and now risks becoming distracted by the criminal fraud trial of its founder Trevor Milton. And Tesla Inc. has delayed its Semi several times.

Volvo, Traton and Daimler are planning to spend $498 million in the next five years to install at least 1,700 chargers in Europe for heavy-duty vehicles. Daimler joined a similar project with BlackRock in the United States, and the industry is working to improve batteries and speed up charging times.

"Europe needs a rather dense network of high-speed truck chargers to facilitate wider adoption of long-haul battery-electric trucks," said Romed Kelp, a partner with consultancy Oliver Wyman. "The appropriate locations need to be identified, and at some of those it's not yet clear if the energy infrastructure is ready to cope with demand."