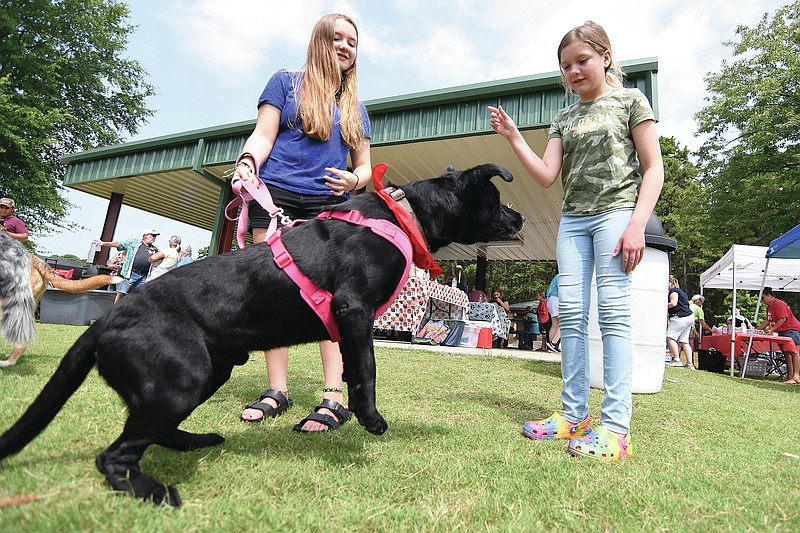 Zoe Gronwale (left) and her sister Gianna, both volunteers, play with Hilord, one of the Maumelle Friends of Animals dogs that was up for adoption, during the Celebration of All Dogs on July 17, 2021, at Lake Willastein Park in Maumelle. The event was put in part to celebrate Maumelle City Ordinance 1022, which repealed a ban on four dog breeds. (Arkansas Democrat-Gazette/Staci Vandagriff)

The Maumelle City Council voted Monday night against reinstating a ban on certain dog breeds but agreed to discuss a future ordinance that would focus on safety measures like leash laws, required fencing, fines, citations and other regulations.

"I promised last week that I'd bring this ordinance before the council ...," said Council Member Steve Mosley. "I've never done this before, but I'd like to make a motion to suspend the rules and do all three readings this evening."

The other members did not second the motion to read the ordinance three times, arguing that the solution to preventing attacks from "dangerous dogs" does not lie in singling out certain breeds.

Instead, council members like Doug Shinn highlighted that, in his ward, dog attacks are often the result of off-leash pets and poor fencing.

Shinn also mentioned that German shepherds often rank high on lists of dangerous dogs but are never included in the list of banned breeds. He reiterated that the goal should not be to look at dogs and determine if they should stay or go but to instead work to reinforce safe and responsible pet ownership in the city.

The council agreed to table Mosley's ordinance indefinitely so that they can move forward on creating an ordinance that works to please both sides of the debate. Council Member Jess Holt said he is working on an amendment to bring to the council at the next meeting.

Other members agreed to discuss and put together a proposal that shifts the focus in a way that will allow residents to feel safer, without reinstating the ban as a whole.

The council voted 5-3 in April 2021 to lift the previously enforced pit bull ban.

An Aug. 24 attack by a dog on 73-year-old Marcus Higgins and his small dog, "Ruff," prompted Mosley to propose reinstating the ban.

Higgins' dog died of internal injuries and Higgins suffered lacerations to his face, hands, feet and back.

Mosley believes the attack would not have happened had the ban still been in place.

Since the incident, the District Court has ordered that the aggressor dog, "Zeus," be humanely euthanized. The other dog, "Saber," has been transferred into custody in Little Rock "until further proceedings in this matter," according to a court document.