TELEVISION: Ms. Pat tells it like it is on BET+ series 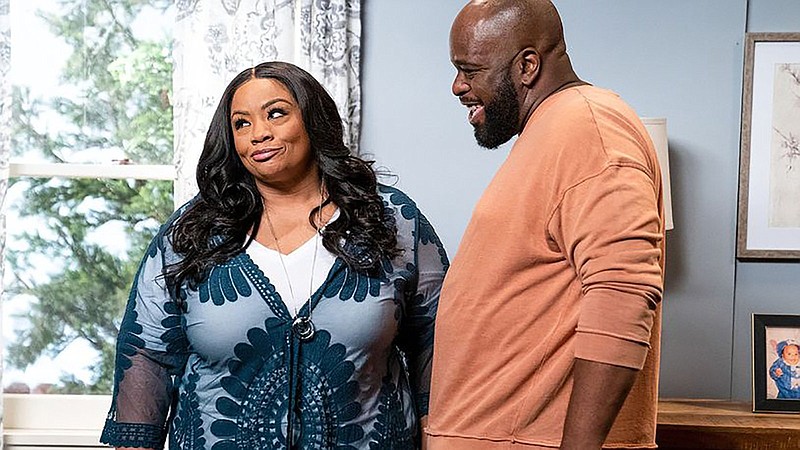 Season 2 of the “The Ms. Pat Show” is now available on BET+ and Season 3 will likely come out in 2023. Critics and fans have lauded the show for its biting wit, its authenticity and Ms. Pat’s underlying humanity even when her character is being mean. (BET+/TNS)

ATLANTA — Patricia Williams, who goes by Ms. Pat, bounds down the set stairs and starts helping her sister Denise do the laundry while questioning her husband's odd behavior.

At one point, she grabs a large bra that is supposed to be hers and the studio audience chuckles. After the scene ends, Ms. Pat starts goofing around with said bra and garners even more laughs. "I didn't buy 'em," she cracked off camera. "I grew 'em!"

Veteran actress Tami Roman, who plays the lithe Denise, adds, "That'd be a dress for me!"

The BET+ series "The Ms. Pat Show" which is a semi-autobiographical take on the Atlanta native's life, was on its final day of production in Atlanta earlier this summer after several months of shooting two consecutive seasons and 20 episodes. There was burbling joy and energy among the cast, crew and studio audience members as former V-103 host Miss Sophia and a DJ made it feel like a party between takes with loud music and jokes.

It didn't hurt that the show had received an Emmy nomination for directing for a comedy series.

Season 2 is now available on the streaming service and Season 3 will likely come out in 2023. Critics and fans have lauded the show for its biting wit, its authenticity and Ms. Pat's underlying humanity even when her character is being mean.

"The Ms. Pat Show," in fact, feels very much like a modern-day "Roseanne," a blue-collar family living in a small, white conservative town in Indiana. The big difference is she's Black and grew up in the rough streets of Atlanta. She moved to Indiana hoping to raise her kids in a safer environment.

"I had never acted before," said Ms. Pat, a stand-up comic by trade who is now also a morning host on Atlanta radio station V-103. "They sent me to acting classes. This was my story so it was even more challenging. I had to pull from my own feelings and learn to connect with other actors. One reporter asked me if this was a comedy or a drama. You got me! I'm doing 100 different things in one episode. Should people be crying during a comedy?"

Jordan Cooper, the executive producer and showrunner, added: "Plenty of times we'll say cut and we're all crying. I like to use comedy as a healing tool."

Most of the show's prime story ideas stem from things that actually happened to Ms. Pat. During Season 3, for instance, a cousin shows up who took the rap for Ms. Pat and kept her out of prison. The storyline is changed up a bit from real life but the core tensions remain. "This cousin took a drug case for me," Ms. Pat said. "My career took off. She feels like I owe her something."

Ms. Pat has a gay daughter so she did an episode where her character was ignorant of nonbinary terms. "I get so many emails saying, 'Thank you for telling my story,'" she said. "Personally, I love my child more than I give a [expletive] about her sexuality."

Cooper, she said, would encourage Ms. Pat to go deep on some really dark parts of her life, like being molested by her mother's boyfriend. "I'd tell him, 'I'm not ready,'" she said. "We did it during the second season. It's a very strong episode. It was also healing for me but still hurtful. I remember getting in my car after the shoot and crying."

Ms. Pat is proud her show has helped build the audience at BET+, which was less than 2 years old when "Ms. Pat Show" debuted last year. "I used to be a drug dealer," she said. "We could start a trap. This is our trap. We got them hooked. They'll come back!" (BET+, owned by Viacom, has not publicly released subscription numbers since early 2021, when it said it had 1.5 million subscribers.)

She said she spent the past year talking incessantly about the show to anybody who would listen, figuring she was her own best marketing tool. "TV, radio, podcasts," she said. "I became so tired of promoting it but I kept on doing it to get the word out."

And now that it's clear her work has paid off, she said she doesn't want to ease up on the accelerator.

"That's just a mentality in me," she said. "Attention spans are so short out there. You have to constantly keep yourself out in front of people's minds. You have to train them to think that this is what they need to watch."

Ms. Pat on the show surrounded herself with more experienced actors including J. Bernard Calloway as her supportive husband Terry and Roman, who provides plenty of physical comedy as Ms. Pat's off-kilter sister Denise. "I love Lucille Ball," said Roman, who has also made a name for herself on "Real World" and "Basketball Wives." "I love Dick Van Dyke. All that silly stuff. I'm able to bring that to the table."

Calloway enjoys the interplay between the actors and showrunner Cooper. "He lets us run, then wrangles us in," he said. "Ultimately, he trusts us. That's the greatest feeling. There are no handcuffs."

Briyana Guadalupe, who plays Janelle, Ms. Pat's angsty social justice warrior of a teen daughter, said she marvels over Ms. Pat's ability to be in the moment and finding the funny.

There was a scene, for instance, where Janelle inadvertently ended up with cupcake icing on her cheek. "Ms. Pat was supposed to just walk away but instead, she slid her finger on my face, took the icing and licked it off her finger. I looked at her shocked. That was my actual reaction, not scripted. It was so Ms. Pat. It was perfect."

Cooper said what helps the show is the fact it is in front of a live studio audience, a template for sitcoms going back to "I Love Lucy." Even during the heart of the pandemic, they scrounged together 25 people for each episode season one, enduring the pains of covid-19 testing and mask protocols. For season two and three, they were able to bring in more than 50 people at a time.

"I love sitcoms," he said. "It's theater with cameras. The audience is another character on the show."