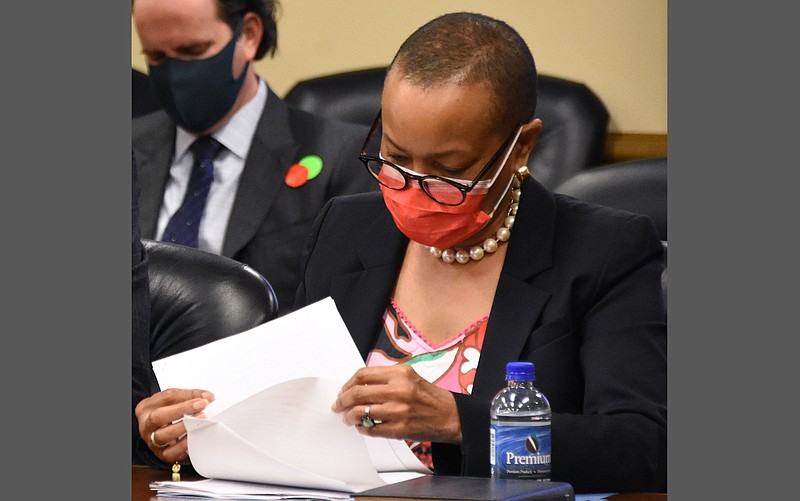 As Election Day draws closer in Arkansas, state election officials Monday said that a variety of reasons could lead to a decision to remove someone from voting rolls after a campaign was launched last week to contact Arkansans who have been dropped since 2020.

Get Loud Arkansas announced a new effort to contact more than 104,000 Arkansans the group said may have been inappropriately removed from voting rolls.

The 104,000 people who were removed from the voter rolls were removed because of "inconsistencies," in the process under the federal National Voter Registration Act of 1993, said Kristin Foster, civic engagement director for Get Loud Arkansas.

Under the National Voter Registration Act, if a registered voter does not respond to a notice from a local election official and does not vote in two consecutive federal elections he or she can be removed from the voter roll.

"If carried out correctly, this process should not allow anyone to be removed after the first notice, but we have found inconsistencies that are causing some voters to be purged from the rolls after missing only one election," Foster said in an email. "Additionally, the notices tend to be nondescript and easy to miss. This ineffective form of outreach has caused thousands of Arkansans to be wrongly removed, many living at the same address for more than 10 years."

"We will be calling, emailing, sending mail, and showing up on door steps if that's what it takes to make sure every eligible Arkansan is able to make their voice heard by voting," state Sen. Joyce Elliott, the executive director for Get Loud Arkansas, said in a news release.

Elliott mentioned in the news release that an analysis by the Brennan Center for Justice at NYU Law School shows there are growing concerns that this process may be abused to influence the outcome of elections through a procedure commonly referred to as voter purging.

"We must ensure the accuracy of our voting rolls, and I know we are capable of doing that in a manner that does not continue to disenfranchise communities of people who have been silenced for generations," Elliott said. "We will never know what Arkansas is truly capable of until we can make sure all voices are heard."

Arkansas Secretary of State John Thurston is the state's chief election official and responsible for ensuring compliance with the National Voter Rights Act.

Kevin Niehaus, a spokesman for the secretary of state's office, said that as of June 1 the state had 1,765,681 registered voters.

Niehaus said he couldn't confirm how many voters have been removed since 2020, but explained that there are several different reasons why someone might be removed.

"The first reason is that per the National Voter Registration Act," he said in an email. "County Clerk's are required to send notices to voters who haven't voted in the previous two federal elections asking if they still want to be listed as a registered voter. If the voter doesn't respond, they are removed from the voter rolls. This is done in the odd year between elections."

The second reason is the Arkansas Crime Information Center sends a monthly list of people who need to removed due to felony convictions.

"The final reason is due to death," Niehaus said. "The Department of Health sends a monthly list of people who have passed away and those voters are removed."

Darlene Neumeier, office manager for the Sebastian County clerk's office, said the county currently has 70,652 registered voters. She said the number of registrants who have been changed to removable over the past two years stands at 14,839.

"Reasons for removable status range from moved out of county, felon, voters request, death notification and cancellation notice," she said.

Neumeier said to register in your county you must complete an Arkansas Voter Registration Application or register at state revenue offices when people get or renew their driver's license.

Niehaus said the best way to register to vote is to get an application from the secretary of state's website or to visit the local county clerk's office.

"The deadline to register to vote is October 11," he said.

Allison Cain, office manager and election coordinator for Saline County, said her office has 78,345 registered voters listed. She said the county doesn't have a specific number for voters removed. She said the best way to register as a voter is to do it in person at 215 N. Main St., Suit 9, in Benton.