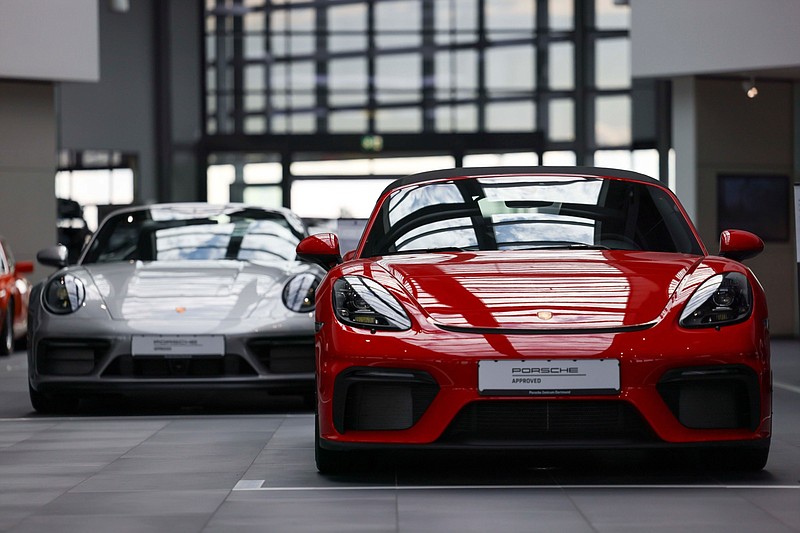 Volkswagen AG is looking to raise as much as $9.4 billion from the initial public offering of its iconic sports-car maker Porsche in what could be Europe's largest listing in more than a decade.

The German carmaker said late Sunday it is seeking a valuation of $70.05 billion to $75.06 billion for the listing, below an earlier top-end goal of as much as $85.07 billion, with the deal going ahead at a time of deep market upheaval. European markets have been largely shut to IPOs for most of the year, with companies shying away from seeking new listings because of the region's energy crisis, rising interest rates and record inflation.

Amid the stock market slump, the plan to list is getting a boost from firm commitments of key cornerstone investors. Qatar Investment Authority, Norway's sovereign wealth fund, T. Rowe Price and ADQ are set to subscribe to preferred shares of as much as $3.7 billion, the manufacturer said.

"We are now in the homestretch with the IPO plans for Porsche and welcome the commitment of our cornerstone investors," VW's Chief Financial Officer Arno Antlitz said. The offer period will start on Sept. 20 with a planned trading start on Sept. 29.

During meetings with potential investors, VW pitched the listing as a chance to invest in a company that combines the best of carmaking rivals like Ferrari and luxury brands such as Louis Vuitton. While Ferrari and Porsche both target wealthy buyers, the Italian manufacturer remains in a league of its own, boasting industry-leading margins and delivering a fraction of Porsche's 300,000 annual sales.

At the mid-valuation point for the preference shares, the IPO would value Porsche at 10.2 times earnings before interest, tax, depreciation and amortization, according to Jefferies. This compares with Ferrari's multiple of 23.1 times. Still, Porsche's upper valuation almost matches VW's total market value -- comprising Audi, Skoda, the VW brand as well as Seat among others -- of $88.07 billion.

Porsche is targeting revenue of as much as $39.03 billion this year and return on sales of as much as 18%, up two points from last year, the company said in July. Returns are to climb above 20% in the long term.

Aside from offering investors a slice of one of the most recognizable names in carmaking, the IPO will hand back significant decision-making power to the Porsche-Piech family, who lost control of the sports-car maker more than a decade ago after a protracted takeover battle with VW.

To account for the interests of the billionaire family, which holds 53% of VW's voting shares via the separately listed Porsche Automobil Holding, the Porsche IPO is complex and has triggered governance concerns that mirror those about VW's convoluted structure.

Investors will be able to subscribe to 25% of Porsche preferred shares, which carry no voting rights. The family will buy 25% plus one of Porsche's common shares with voting rights, meaning they will receive a minority blocking stake and sway on future key decisions. The family has agreed to pay a 7.5% premium on top of the price range for the preferred shares and plan to fund the acquisition with a mix of debt capital of as much as 7.9 billion euros and a special dividend payed out by VW.

Proceeds from the deal will help VW to finance its electric-vehicle transition and investments in software, the carmaker says.

While interest for the IPO has been high, some investors have said the appointment of Oliver Blume, Porsche's chief executive, to the helm of VW raises questions about Porsche's future independence, as well as a small free float of 12.5%, they say.

Still, an IPO of this size is so rare in Europe that it can defy the broader market downturn, with portfolio managers forced to take a hard look at the candidate because it will automatically enter the region's main equity benchmarks, people attending the meetings to drum up interest in the share sale have said.

Print Headline: Porsche IPO gain for VW at $9.4B