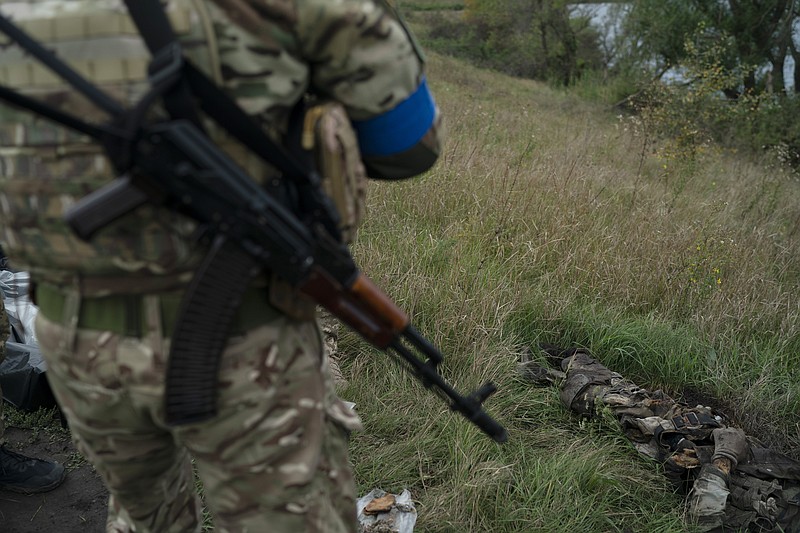 EDS NOTE: GRAPHIC CONTENT - A Ukrainian national guard serviceman stands next to the body of a Ukrainian soldier in an area near the border with Russia, in Kharkiv region, Ukraine, Monday, Sept. 19, 2022. In this operation seven bodies of Ukrainian soldiers were recovered from what was the battlefield in recent months. (AP Photo/Leo Correa)

KYIV, Ukraine -- A Russian missile blasted a crater close to a nuclear power plant in southern Ukraine on Monday, damaging nearby industrial equipment but not hitting its three reactors. Ukrainian authorities denounced the move as an act of "nuclear terrorism."

The missile struck within 328 yards of the reactors at the South Ukraine nuclear power plant near the city of Yuzhnoukrainsk in Mykolaiv province, leaving a hole 6½ feet deep and 13 feet wide, according to Ukrainian nuclear operator Energoatom.

The reactors were operating normally and no employees were injured, it said, but the proximity of the strike renewed fears that Russia's nearly seven-month-long war in Ukraine might produce a radiation disaster.

This nuclear power station is Ukraine's second-largest after the Zaporizhzhia nuclear power plant, which has repeatedly come under fire.

The industrial complex that includes the South Ukraine plant sits along the Southern Bug River about 190 miles south of the capital, Kyiv.

The attack caused the temporary shutdown of a nearby hydroelectric power plant and shattered more than 100 windows at the complex, Ukrainian authorities said. The U.N.'s International Atomic Energy Agency said three power lines were knocked offline but later reconnected.

Ukraine's Defense Ministry released a black-and-white video showing two large fireballs erupting one after the other in the dark, followed by incandescent showers of sparks, at 19 minutes after midnight. The ministry and Energoatom called the strike "nuclear terrorism."

The Russian Defense Ministry did not immediately comment on the attack.

Russian forces have occupied the Zaporizhzhia nuclear plant, Europe's largest, since early after the invasion.

Shelling has cut off the plant's transmission lines, forcing operators to shut down its six reactors to avoid a radiation disaster. Russia and Ukraine have traded blame for the strikes.

The IAEA, which has stationed monitors at the Zaporizhzhia plant, said a main transmission line was reconnected Friday, providing the electricity it needs to cool its reactors.

But the mayor of Enerhodar, where the Zaporizhzhia plant is located, reported more Russian shelling Monday in the city's industrial zone.

While warning Friday of a possible ramp-up of strikes, Putin claimed his forces had so far acted with restraint but warned "if the situation develops this way, our response will be more serious."

"Just recently, the Russian armed forces have delivered a couple of impactful strikes," he said. "Let's consider those as warning strikes."

The mayor of the Russian-occupied eastern city of Donetsk, meanwhile, said Ukrainian shelling had killed 13 civilians and wounded eight there.

Patricia Lewis, the international security research director at the Chatham House think-tank in London, said attacks at the Zaporizhzhia plant and Monday's strike on the South Ukraine plant indicated that the Russian military was attempting to knock Ukrainian nuclear plants offline before winter.

"It's a very, very dangerous and illegal act to be targeting a nuclear station," Lewis told The Associated Press. "Only the generals will know the intent, but there's clearly a pattern."

"What they seem to be doing each time is to try to cut off the power to the reactor," she said. "It's a very clumsy way to do it, because how accurate are these missiles?"

Power is needed to run pumps that circulate cooling water to the reactors, preventing overheating and -- in a worst-case scenario -- a radiation-spewing nuclear fuel meltdown.

Other recent Russian strikes on Ukrainian infrastructure have targeted power plants in the north and a dam in the south. They came in response to a sweeping Ukrainian counterattack in the country's east that reclaimed Russia-occupied territory in the Kharkiv region.

Analysts have noted that beyond recapturing territory, challenges remain in holding it. In a video address Monday, Ukrainian President Volodymr Zelenskyy said cryptically of that effort, "I cannot reveal all the details, but thanks to the Security Service of Ukraine, we are now confident that the occupiers will not have any foothold on Ukrainian soil."

The Ukrainian successes in Kharkiv -- Russia's biggest defeat since its forces were repelled from around Kyiv in the invasion's opening stage -- have fueled rare public criticism in Russia and added to the military and diplomatic pressure on Putin. The Kremlin's nationalist critics have questioned why Moscow has failed to plunge Ukraine into darkness yet by hitting all of its major nuclear power plants.

The Baltic nations of Estonia, Latvia and Lithuania closed their borders Monday to most Russian citizens in response to domestic support in Russia for the war in Ukraine.

Under the coordinated travel ban, Russians wanting to travel to the Baltic countries as tourists or for business, sports or cultural purposes will not be allowed in even if they hold valid visas for the European Union's checks-free Schengen Area.

The prime ministers of the three Baltic nations and Poland agreed earlier this month to stop admitting Russian citizens, saying the move would protect the security of the four European Union member nations.

"Russia is an unpredictable and aggressive state. Three-quarters of its citizens support the war. It is unacceptable that people who support the war can freely travel around the world, into Lithuania, the EU," Lithuanian Interior Minister Agne Bilotaite said Monday.

"Such support for hostilities can pose threats to the security of our country and the EU as a whole," she added.

In the eastern Polish city of Bialystok, a member of the Russian Culture and Education Association in Poland said a new ban would have hit much harder if the pandemic restrictions had not already largely limited travel with Russia.

"After more than two years of restrictions, we see no prospects for an improvement, and that is the worst part," Andrzej Romanczuk, a Polish citizen, told The Associated Press.

He said regions on both sides of Poland's border with Kaliningrad will be hit economically because border traffic there drives local trade. Russians also shop in Polish cities like Warsaw or Krakow.

More than 65,000 Russians have crossed into Poland this year, similar to the same period last year but 10 times smaller than before the pandemic.

The Lithuanian Interior Ministry said 11 Russian citizens were stopped from entering that country starting at midnight. Most were trying to enter by land from Kaliningrad or from Belarus. No incidents were reported.

Estonia, a nation of 1.3 million, has registered hundreds of thousands of border crossings by Russian citizens since the start of Russia's war on Ukraine.

The Baltic countries cannot, however, stop Russian citizens from entering via another Schengen nation. They want similar travel restrictions to be taken by all 27 EU member states.

The EU already has banned air travel from Russia after it invaded Ukraine. But before the ban, Russians could still travel by land to Estonia and apparently were then taking flights to other European destinations.

At an EU summit last month, the bloc's 27 members were divided over whether to slap a broad visa ban on Russian citizens, torn between a desire to ramp up pressure on Russian President Vladimir Putin and concerns about punishing ordinary Russians who may not even support his war on Ukraine.

Pro-Russian officials in the two self-declared separatist "republics" in eastern Ukraine pleaded Monday for urgent votes calling on Moscow to immediately annex the territories, a sign of apparent panic that the Kremlin's war in Ukraine is failing.

The appeals from authorities in the Luhansk and Donetsk people's republics came as Ukrainian forces continued to extend their gains of recent days, having already pushed Russian troops out of most of the northeast Kharkiv region.

Access to the front line by journalists is restricted. But there were reports that Ukrainian troops had pushed into the city of Lysychansk in the Luhansk region, and also of fighting around the city of Slovyansk in the Donetsk region -- indications that Russia was at imminent risk of losing territory it had previously controlled in the eastern Donbas region.

In a statement published on the website of the Luhansk People's Republic's "public chamber," the deputy head of the chamber, Lina Vokalova, called for a public referendum to approve annexation and said the vote would "fulfill our dream of returning home -- to the Russian Federation."

A similar message came from the pro-Kremlin puppet authorities in Donetsk.

"It is time to erase the nonexistent border between our countries, as it has long been erased in our hearts, and to conduct a referendum on the question of the DPR becoming part of Russia," the Donetsk public chamber head Aleksander Kofman said.

Before launching his full-scale invasion of Ukraine in February, Russian President Vladimir Putin had formally recognized the independence of the two areas.

Russian officials have also discussed staging referendums in Ukrainian territories they have seized during the war, but many of those plans have been cast into uncertainty by Kyiv's recent military gains.

In Moscow, some pro-war propagandists who have been pushing for Russia to hit back harder in Ukraine cheered the calls for annexation.

"Today a referendum, tomorrow -- recognition as part of the Russian Federation," wrote Margarita Simonyan, chief editor of the RT television network. "The day after tomorrow -- strikes on the territory of Russia become a full-fledged war between Ukraine and NATO with Russia, untying Russia's hands in all respects." 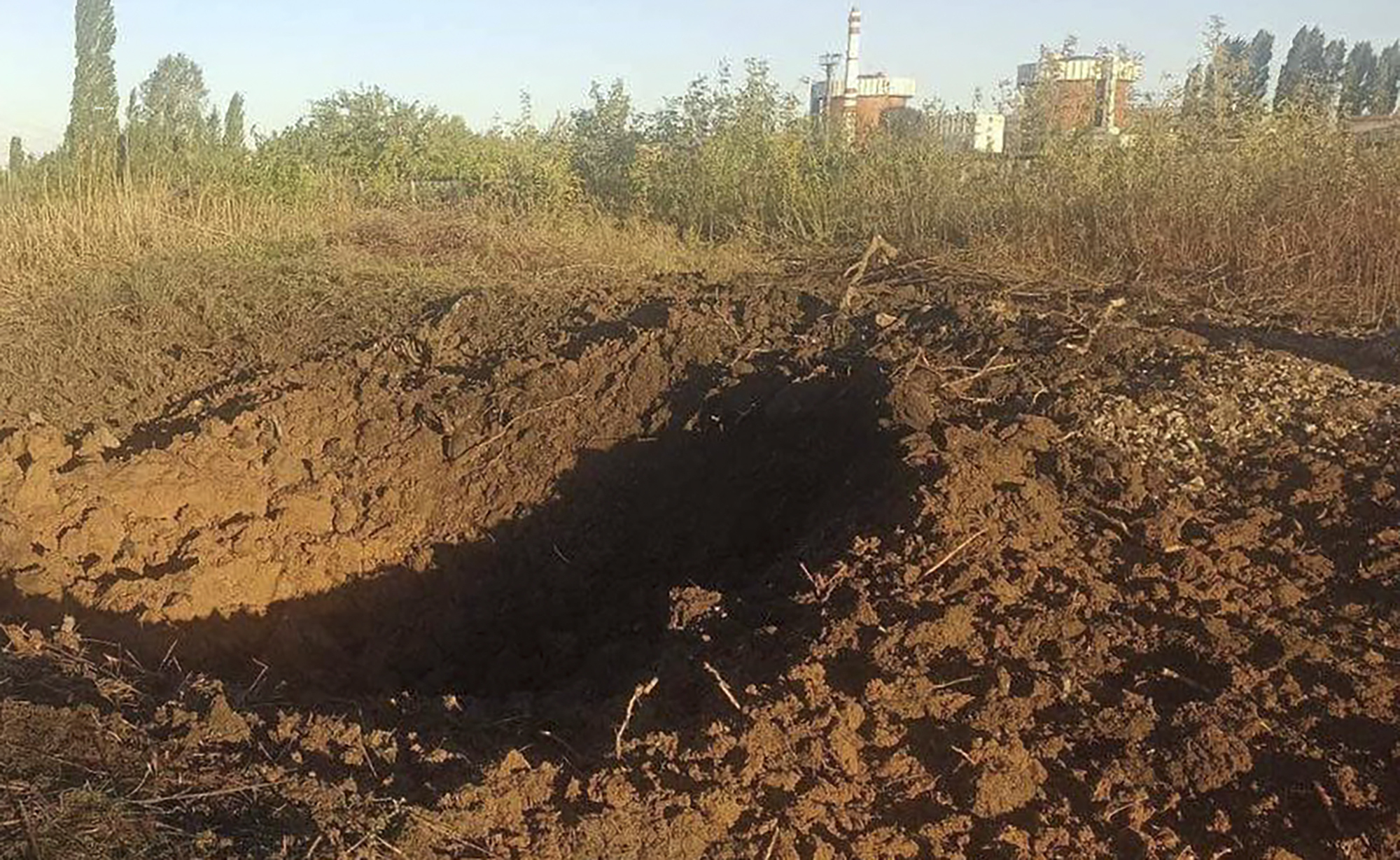 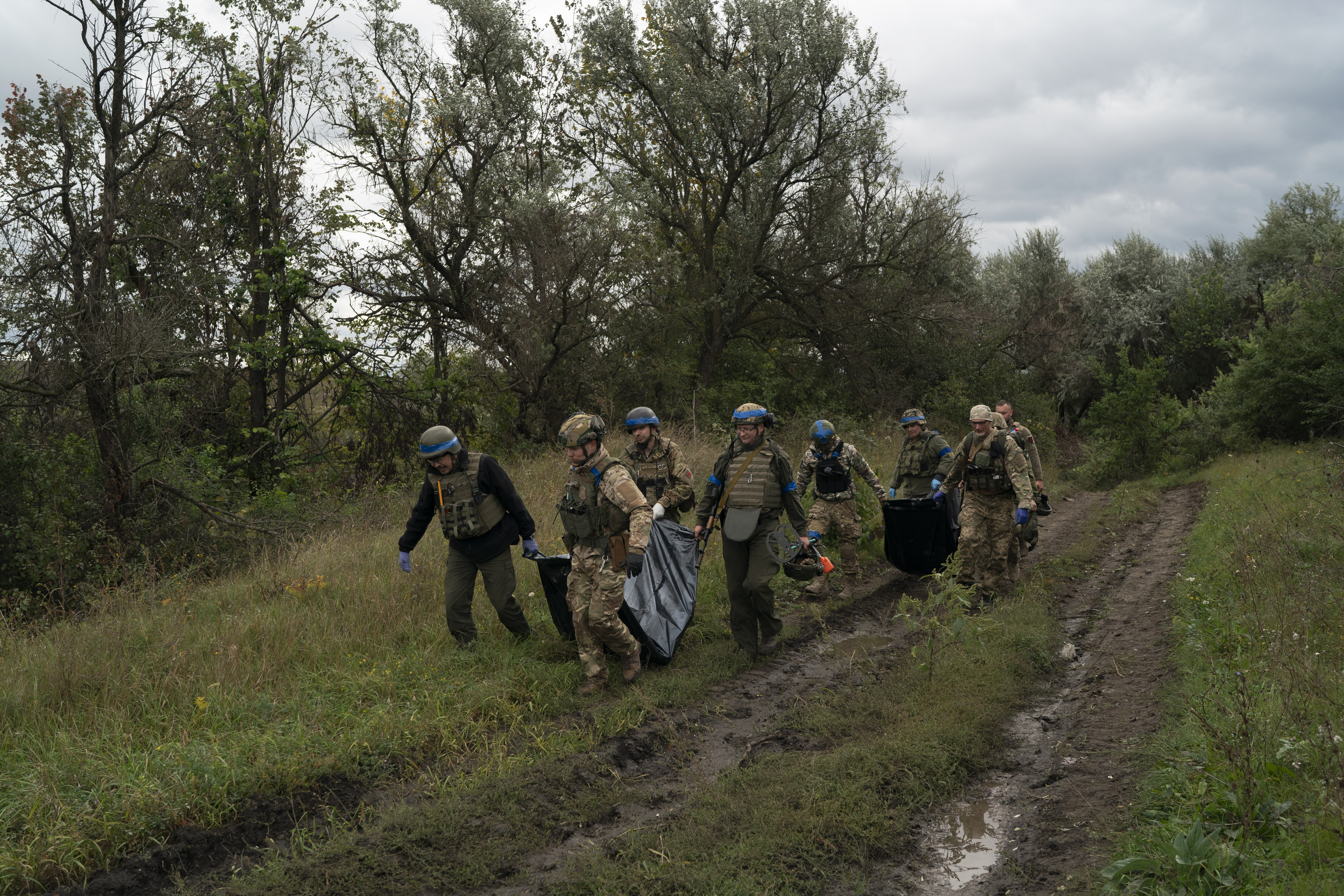 Ukrainian national guard servicemen carry bags containing the bodies of two Ukrainian soldiers in an area near the border with Russia, in Kharkiv region, Ukraine, Monday, Sept. 19, 2022. In this operation seven bodies of Ukrainian soldiers were recovered from what was the battlefield in recent months. (AP Photo/Leo Correa) 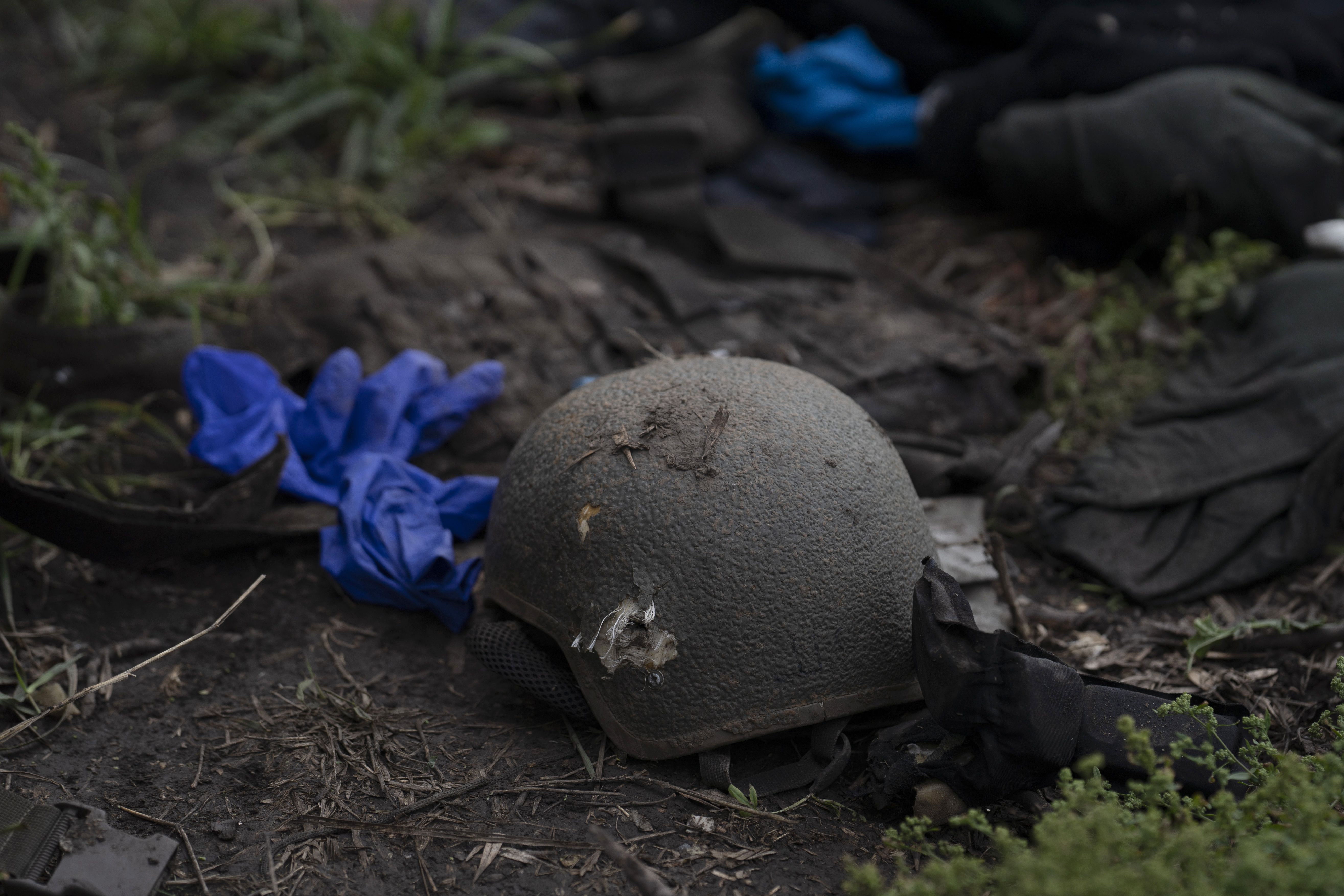 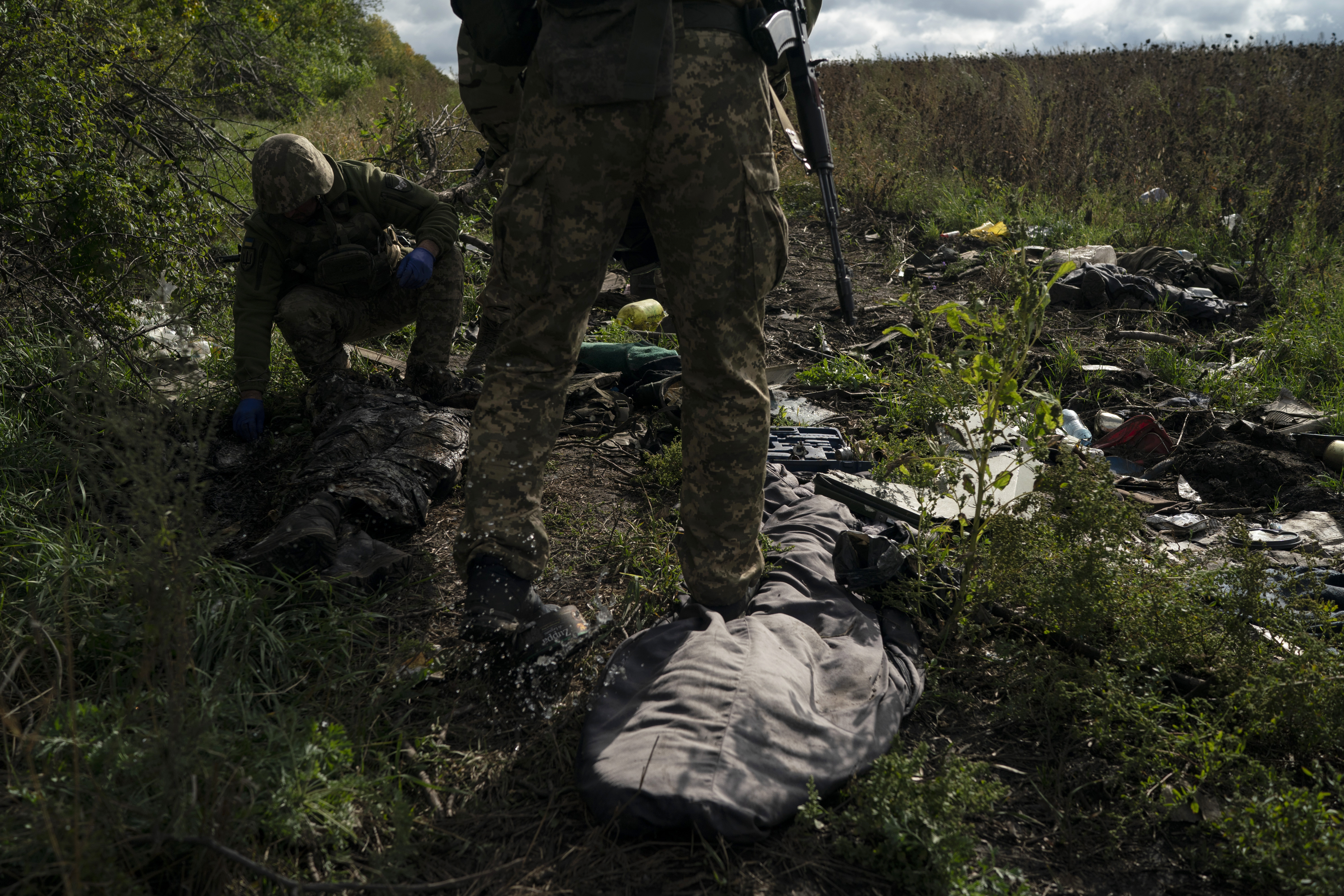 EDS NOTE: GRAPHIC CONTENT - Ukrainian national guard serviceman, left, examines the body of a Ukrainian soldier in an area where three other bodies were lying on the ground, near the border with Russia, in Kharkiv region, Ukraine, Monday, Sept. 19, 2022. In this operation seven bodies of Ukrainian soldiers were recovered from what was the battlefield in recent months. (AP Photo/Leo Correa) 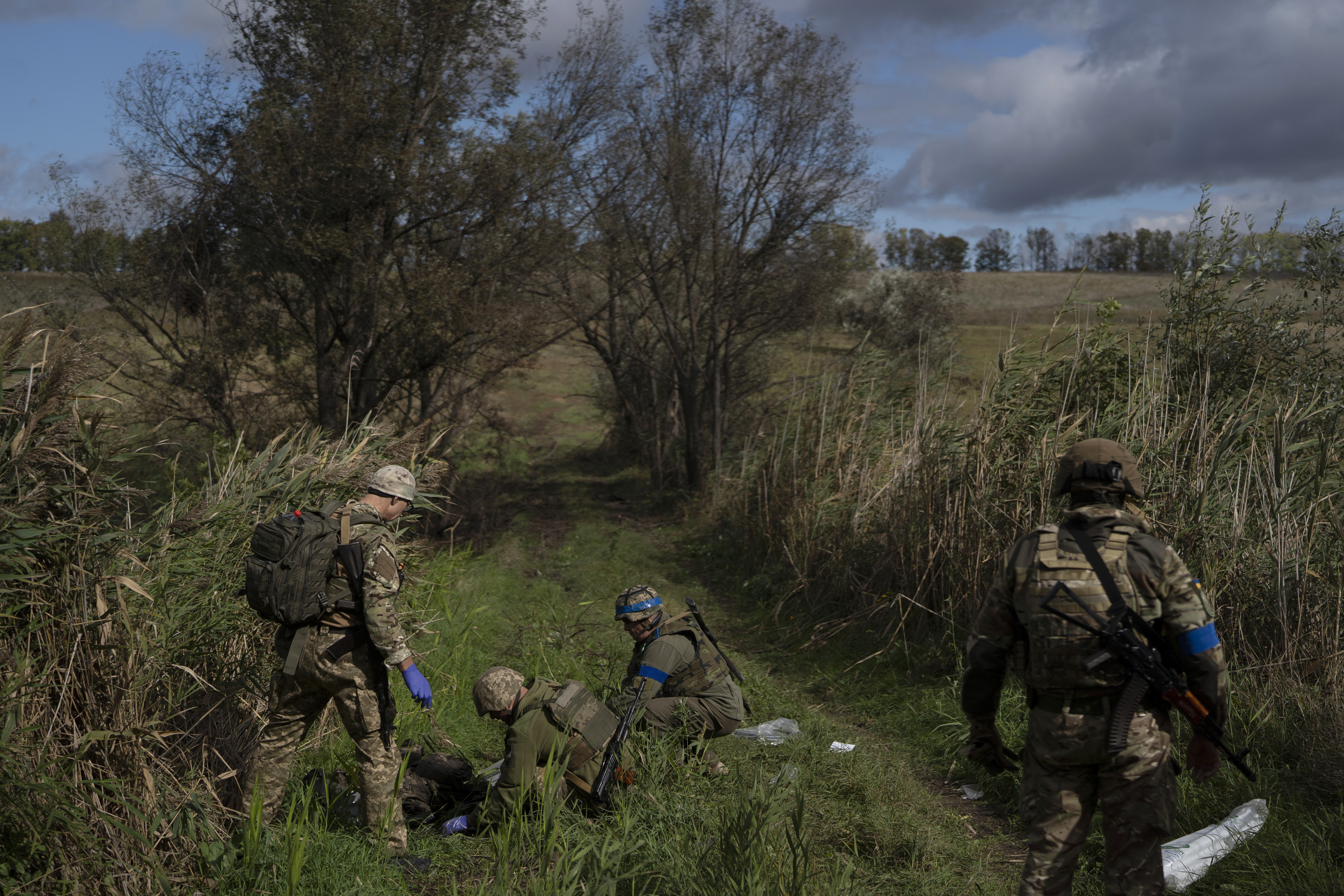 Ukrainian national guard servicemen examine the body of a Ukrainian soldier in an area near the border with Russia, in Kharkiv region, Ukraine, Monday, Sept. 19, 2022. In this operation seven bodies of Ukrainian soldiers were recovered from what was the battlefield in recent months. (AP Photo/Leo Correa) 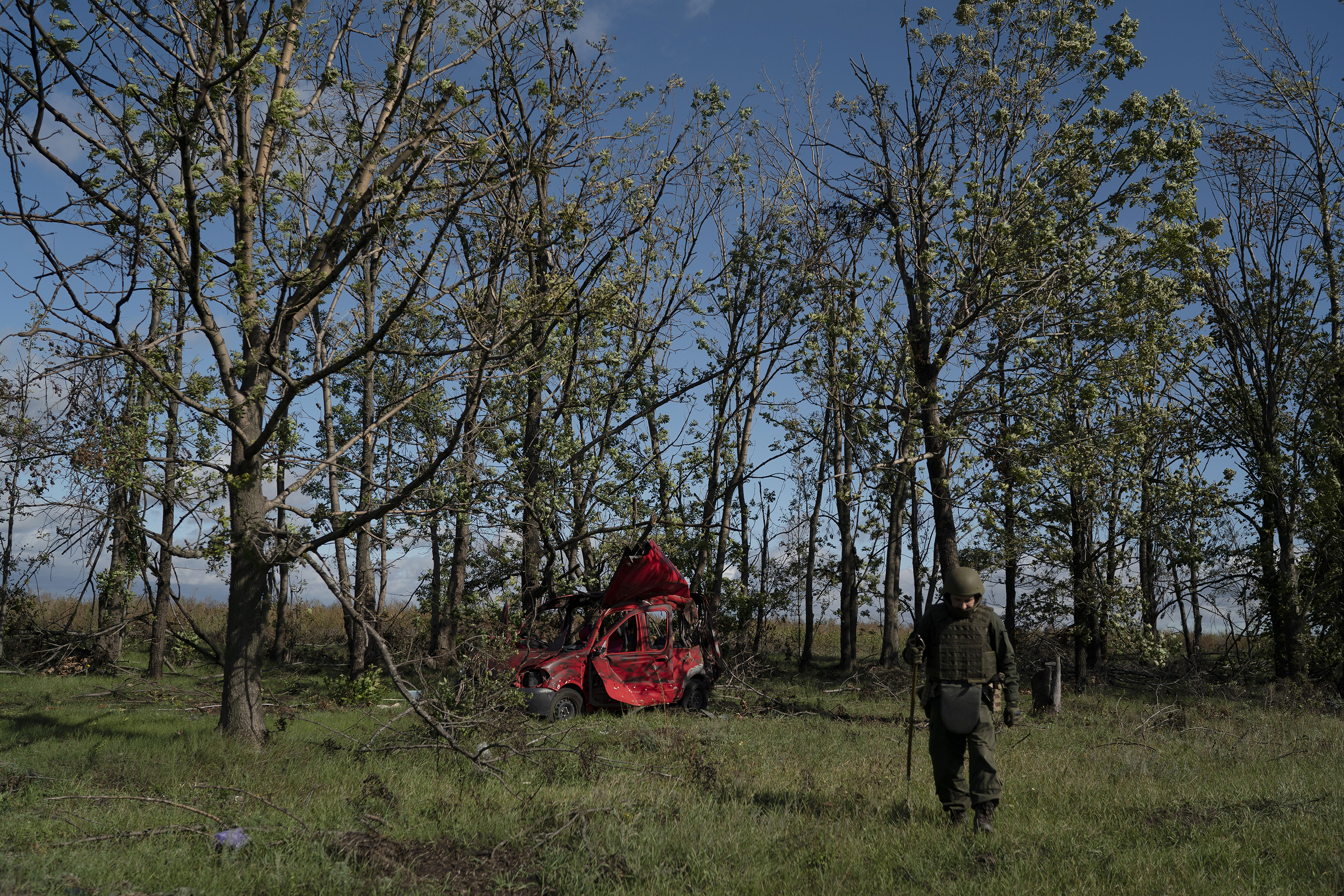 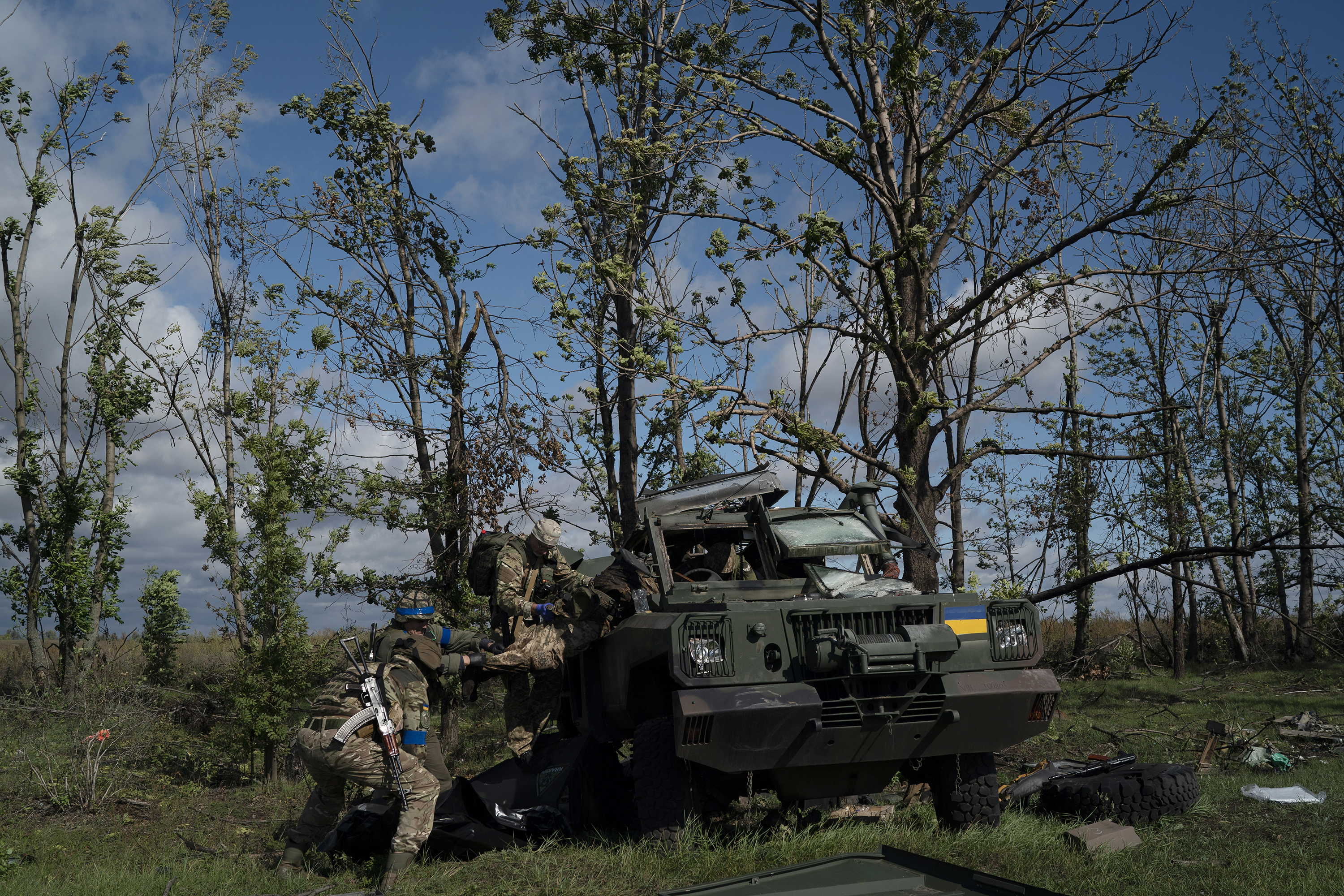 Ukrainian national guard servicemen remove the body of a Ukrainian soldier from an armored vehicle in an area near the border with Russia, in Kharkiv region, Ukraine, Monday, Sept. 19, 2022. In this operation seven bodies of Ukrainian soldiers were recovered from what was the battlefield in recent months. (AP Photo/Leo Correa) 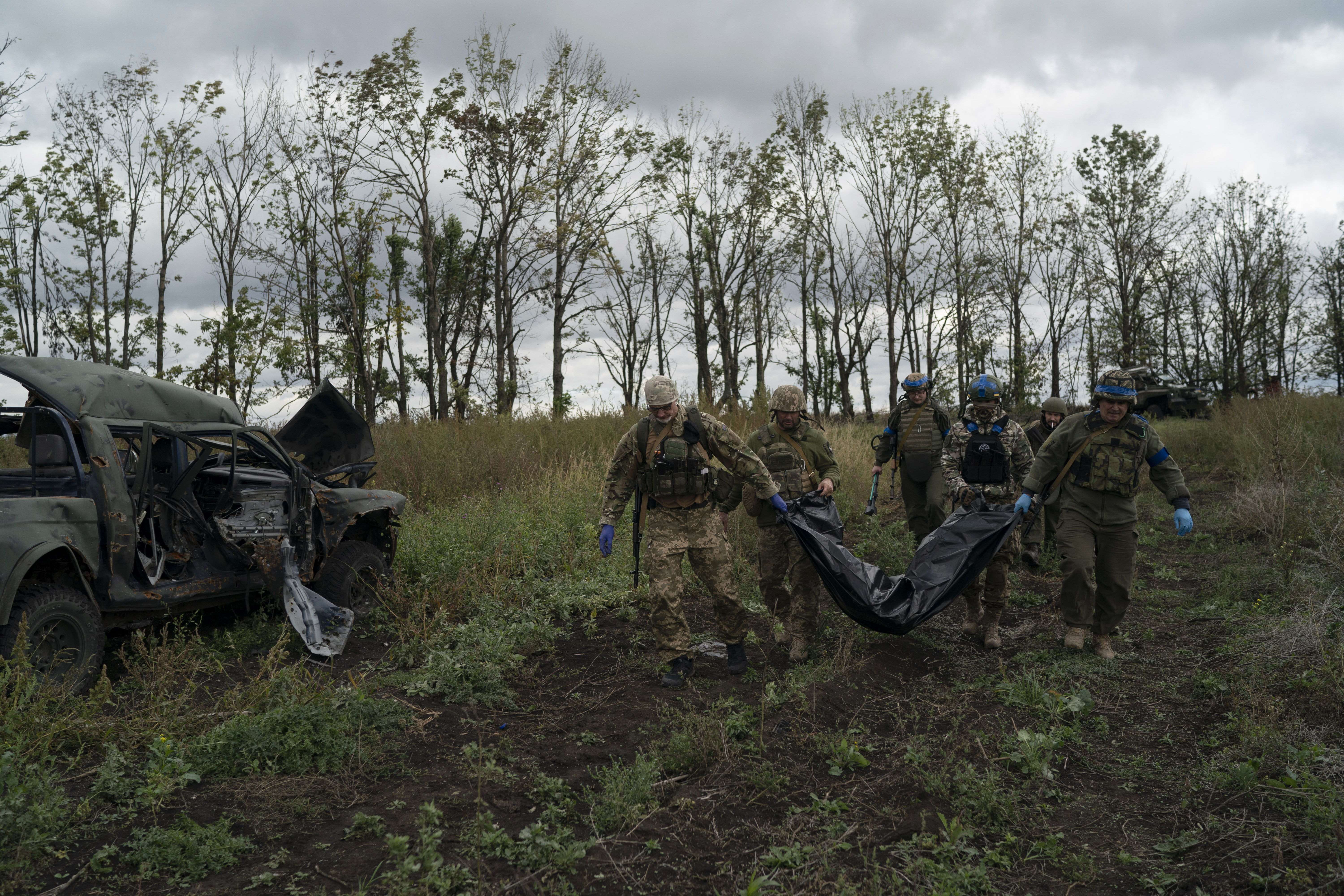 Ukrainian national guard servicemen carry a bag containing the body of a Ukrainian soldier in an area near the border with Russia, in Kharkiv region, Ukraine, Monday, Sept. 19, 2022. In this operation seven bodies of Ukrainian soldiers were recovered from what was the battlefield in recent months. (AP Photo/Leo Correa) 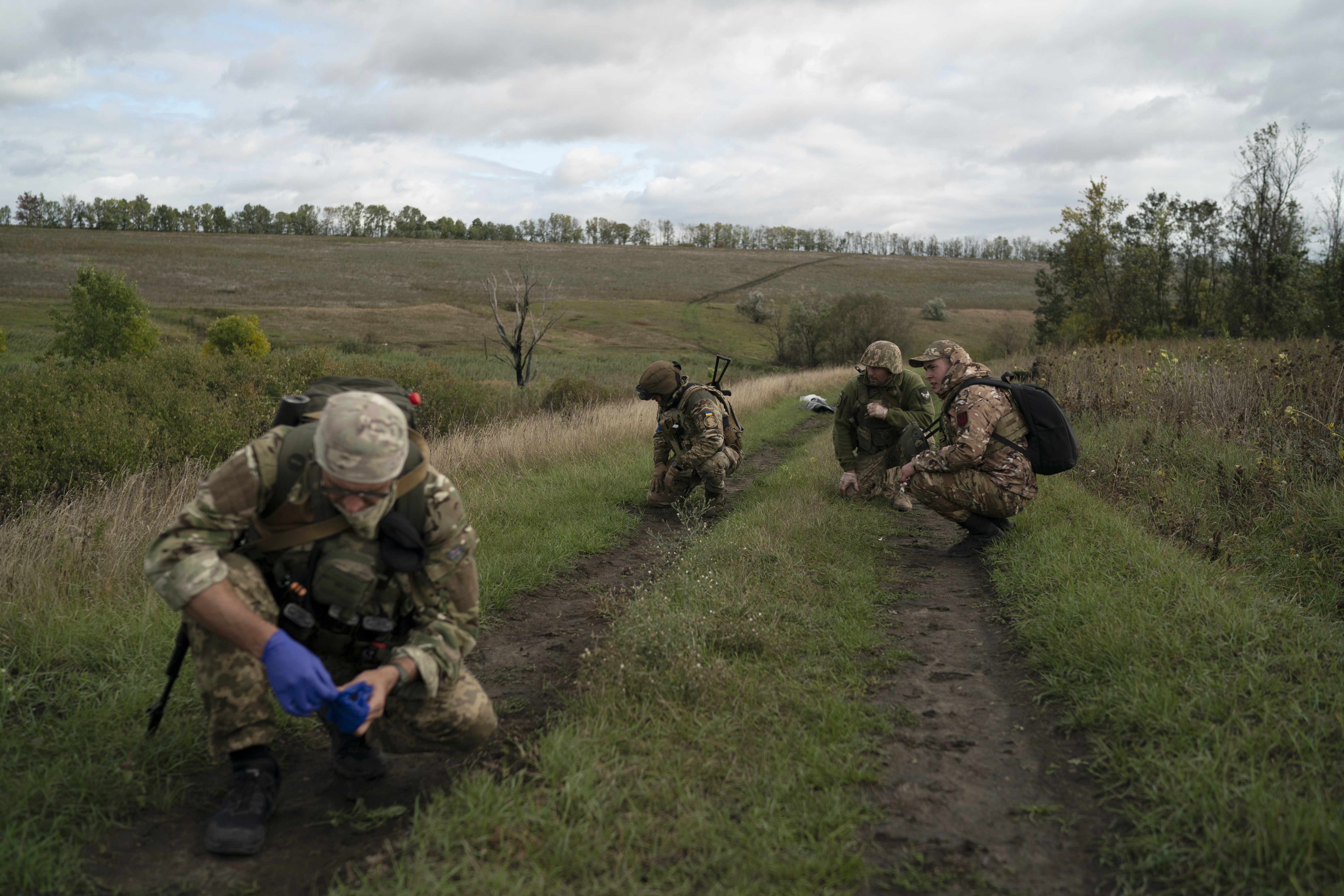 Ukrainian national guard servicemen crouch as a de-miner checks if a body of a Ukrainian soldier is booby-trapped in an area near the border with Russia, in Kharkiv region, Ukraine, Monday, Sept. 19, 2022. In this operation seven bodies of Ukrainian soldiers were recovered from what was the battlefield in recent months. (AP Photo/Leo Correa)