UAPB’s big loss left in the past 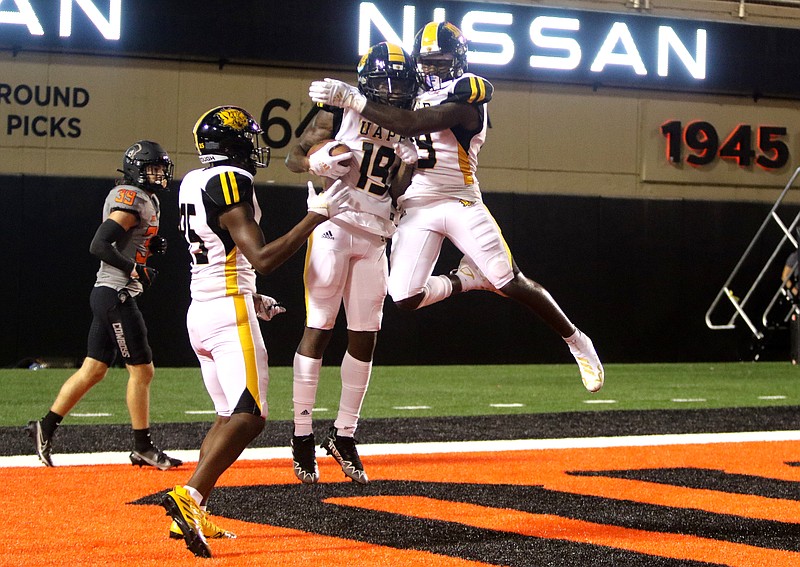 UAPB wide receiver Kenji Lewis (19) and two other teammates celebrate what appeared to be a touchdown in the second half against Oklahoma State on Saturday in Stillwater, Okla. The touchdown was called back after Lewis was ruled to have stepped out of bounds. (Special to The Commercial/Michael Sudhalter)

If there's one thing the University of Arkansas at Pine Bluff football team learned from Saturday's 63-7 loss to Oklahoma State University, it's how flawless the Cowboys (3-0) play.

UAPB Coach Doc Gamble stressed shortly after the game and during Monday's Southwestern Athletic Conference Zoom meeting that neither the speed of the game nor the environment of Boone Pickens Stadium was too much for the Golden Lions (2-1) to handle, even though the Cowboys of the Big 12 Conference went for 538 total yards and held UAPB to 230.

"They handled us; that's for sure," Gamble said. "They played a sharp game. They made us look like what they should have."

Oklahoma State was not rewarded with any style points in the blowout win. The Cowboys slipped one spot to No. 9 in the latest Associated Press Top 25 poll, trading places with a University of Kentucky team that shut out Youngstown State University 31-0. The University of Arkansas remained No. 10 after coming back to beat Missouri State University.

UAPB received votes but is not ranked in the BOXTOROW HBCU Football Media Top 10 poll.

Saturday's 56-point loss was the largest for UAPB since a 90-6 loss to South Dakota State University on Sept. 15, 2018. But Gamble drew some positives from the $425,000 payday Oklahoma State offered to the Lions.

"I was proud of some of the guys that played really well. Isaac Peppers stepped up to the moment," Gamble said, remarking about his senior linebacker's team-high eight tackles, including a sack, and forced fumble. "[Offensive tackle] Mark Evans, of course. The moment wasn't too big for them. Even Skyler Perry played well at times and did what he could do."

The Lions remain on the road this Saturday with a rematch of last season's 39-38 loss to Alcorn State University (1-2), a game in which UAPB led 32-13 with 4:04 left in the third quarter. Alcorn is the second of three straight road games before UAPB returns home for homecoming to take on Texas Southern University.

How to exact revenge is a different matter.

"That's what we're trying to figure out today," Gamble said Monday. "They're solid across the board, well-coached. Coach Fred McNair is going to have them ready to go, like always, and then they're well-coached on defense. I worked with all those guys on the defensive staff. Special teams, they're going to be good, and on offense, you're not going to force them to do anything they don't want to do."

Alcorn State won its first game of the season Saturday over a traditional brand in McNeese State University, 30-19, before 11,425 people in Lake Charles, La.

Aaron Allen completed 15 of 27 passes for 189 yards, 89 of them coming on a touchdown pass to Monterio Hunt. Malik Rodgers had 5 catches for 70 yards and Javonta Leatherwood rushed 11 times for 80 yards to lead the Braves.

"I credit these young men with going out and pouring their heart into it and playing extremely hard," Alcorn's McNair said. "We forced four turnovers, two interceptions and two fumbles, and capitalized on some of the mistakes they made. The guys fought extremely hard. It was a football battle there."

The Braves started out the season with a 31-27 loss to Stephen F. Austin State University and were shut out by Tulane University, 52-0, on Sept. 10.

Print Headline: UAPB’s big loss left in the past