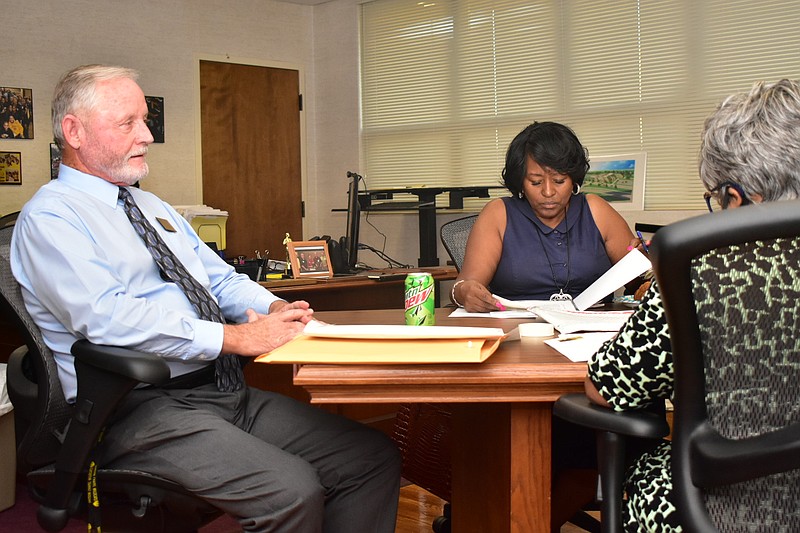 Watson Chapel interim Superintendent Tom Wilson goes over details of the request for qualifications for an architect with school district board Secretary Goldie Whitaker, second from right, and board President Sandra Boone in the executive boardroom inside Wilson's office Monday. (Pine Bluff Commercial/I.C. Murrell)

In a lengthy meeting away from the public boardroom, the Watson Chapel School Board selected a Little Rock architectural firm for the design of a new high school.

Eleven firms responded to the district's request for qualifications, and Lewis Architects scored the highest among them after board members sifted through prospectuses of each company. The meeting remained in open session as the board moved into the executive boardroom in interim Superintendent Tom Wilson's office for a bigger workspace. Wilson said he would notify Lewis of its selection after the meeting.

"The next step, if we hire him tonight, [the architect is] going to start on the plans," Wilson said. "It's going to be about a four-month plan, and then we'll hire a contractor, and we'll still have to have some state things taken over before we hire a contractor."

By that, Wilson referred to state requirements such as approval of the contractor's drawing. A request for qualifications will be made afterward to select contractors. Each firm was scored from 0 to 5 -- 5 behind the highest -- based on five different categories: the history of the firm (including years in business and licenses), the number of high schools done, the desired designs, rates/charges and manner of payment, and whether the company was local. Lewis earned 139 points, WER Architects of Little Rock was second with 105 and ETFC Architects of Memphis was third with 100.

Voters in the Watson Chapel district on Aug. 9 narrowly approved a 5.7-mill increase to 39.8 to cover its portion of a cost-share agreement with the Arkansas Department of Education to construct a 92,500-square foot high school that would replace the junior high campus that first opened in 1945. The increase is expected to generate $8.6 million, which would more than cover its share of a $23 million deal toward facility upgrades, of which the ADE is covering 75%.

District officials have cautioned, however, the cost of the project could rise due to inflation. Wilson said it wasn't immediately known if the state would provide more money to cover possible increases.

The district has 18 months to start construction under its agreement, Wilson said.