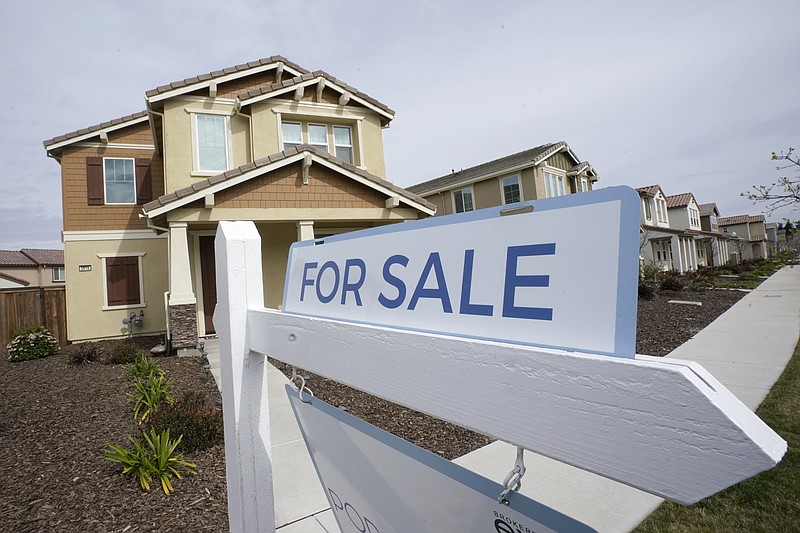 FILE - A for sale sign is posted in front of a home in Sacramento, Calif., Thursday, March 3, 2022. The Federal reserve is expected at its meeting this week to raise its key interest rate by a substantial three-quarters of a point for the third consecutive time. Another hike that large would lift its benchmark rate — which affects many consumer and business loans — to a range of 3% to 3.25%, the highest level in 14 years.(AP Photo/Rich Pedroncelli, File)

WASHINGTON — The Federal Reserve raised its key interest rate Wednesday by three-quarters of a point for a third straight time and signaled more sharp rate increases to come — an aggressive pace that's heightening the risk of a recession.

The Fed's move increased its benchmark short-term rate, which affects many consumer and business loans, to a range of 3% to 3.25%, the highest level since early 2008.

The officials also forecast that they will raise their benchmark rate to roughly 4.4% by year's end, a full percentage point higher than they had forecast in June. And they expect to raise the rate further next year, to about 4.6%. That would be the highest level since 2007.

Rates that high would be well into what the Fed calls "restrictive" territory, meaning they would be intended to sharply slow borrowing and spending, cool hiring and wage growth and defeat high inflation.

The central bank's action Wednesday followed a government report last week that showed high costs spreading more broadly through the economy, with price spikes for rents and other services worsening even though some previous drivers of inflation, such as gas prices, have eased.

By raising borrowing rates, the Fed makes it costlier to take out a mortgage or an auto or business loan. Consumers and businesses then presumably borrow and spend less, cooling the economy and slowing inflation.