From Tiger to Aggie: Johnson steps in at quarterback for A&M 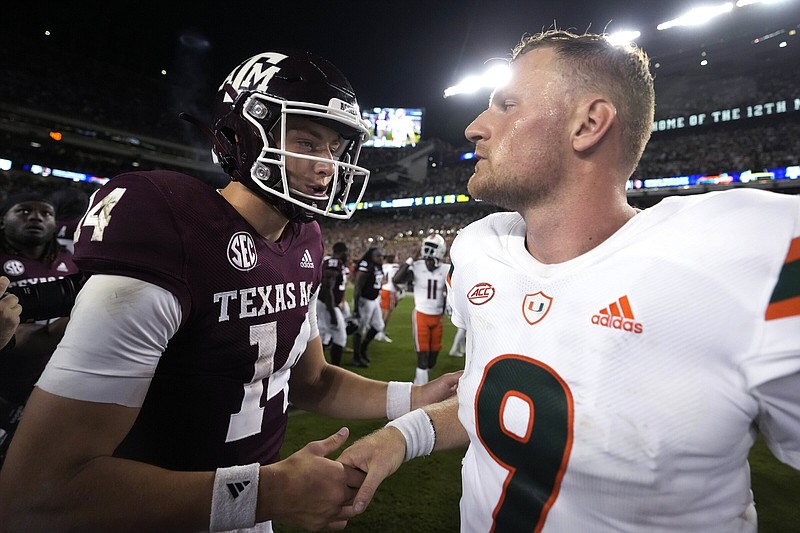 FAYETTEVILLE -- In Max Johnson's final game at LSU last season, he threw the game-winning touchdown pass in the Tigers' 27-24 victory over Texas A&M.

Now Johnson, a 6-5 junior, is starting at quarterback for the Aggies.

Coach Jimbo Fisher had Johnson replace Haynes King, who started the first two games, after Texas A&M was held to 38 plays and 186 yards in total offense in Appalachian State's 17-14 victory over the then-No. 6 Aggies at Kyle Field on Sept. 10.

Johnson didn't make anyone forget Johnny Manziel -- the Aggies' Heisman Trophy-winning quarterback in 2012 -- but he played well enough for Texas A&M to bounce back with a 17-9 victory at home over No. 13 Miami last week.

"He was very calm," Texas A&M senior receiver Ainias Smith said when asked about Johnson's demeanor in the huddle. "He was a leader and just took control of the offense.

Most importantly in a low-scoring defensive struggle, Johnson didn't turn the ball over.

"He took care of the football," Fisher said. "I thought he got the football out quickly ... He took a couple sacks, but there wasn't anywhere to throw it away on those plays.

"He managed the game. The game wasn't too big for him. Good third-down throws. He had good poise. He understood the information he was getting on the sideline.

"Hopefully he can continue to grow and we can grow around him and keep playing better. He's developing and I love his attitude and demeanor."

Johnson will make his second start for the Aggies, but the 16th of his college career, when No. 23 Texas A&M (2-1) plays its SEC opener against No. 10 University of Arkansas (3-0, 1-0) on Saturday night at AT&T Stadium in Arlington, Texas.

When the Razorbacks won 16-13 in overtime at LSU last season, Johnson started, but he was replaced by Garrett Nussmeier on the third series and didn't play the rest of the game after completing 3 of 6 passes for 21 yards.

Despite Johnson's limited snaps against Arkansas, he remained in the starting lineup and capped his time at LSU by completing 22 of 38 passes for 306 yards and 3 touchdowns -- including a 28-yard score to Jaray Jenkins with 20 seconds left -- to beat the Aggies in the regular-season finale.

Johnson, the son of former NFL quarterback Brad Johnson, then went into the transfer portal and landed at Texas A&M.

With King having missed the final 10 games in 2021 because of a leg injury and Zach Calzada -- who replaced King -- transferring to Auburn, Fisher had interest in adding Johnson after he passed for 3,884 yards and 35 touchdowns in 18 games at LSU.

Losing to Appalachian State caused Fisher to move Johnson ahead of King for practices leading into the Miami game.

"It's freaking awesome,"Johnson told reporters after the Aggies beat the Hurricanes. "I love playing with these guys. Going to practice every day. Coming out here, getting a win over a top 15 team is pretty incredible.

"Shout-out to the O-line and to the defense for playing great."

Johnson said he didn't get discouraged when King was named the starter going into the season.

"I've been through the situation multiple times at LSU, whether it was starting or not playing at first and then getting my chance," he said. "I came ready to work every day."

The Aggies are last in the SEC in total offense (313.7 yards) after being held to 264 against Miami on 52 plays, but Fisher took exception when a reporter in the postgame news conference asked if he considered it an ugly win.

"Ugly? How's it ugly?" Fisher said. "When you play complementary football, you do the right thing, you don't turn the football over, you make the plays you've got to make, that's what winning football does."

The Aggies took a 17-3 lead in the third quarter on Johnson's 25-yard touchdown pass to Devon Achane, and held on to win by stopping the Hurricanes on downs at the Texas A&M 40 with 46 seconds left.

"We had to win this game," Fisher said. "It was a tough game coming off a tough loss.

"It's a shot we needed. We didn't need another shot the other way."

Smith, who leads the Aggies with 14 receptions for 259 yards and 2 touchdowns, said he used the Appalachian State loss to fire up his teammates.

"Let's go ahead and use it as fuel, use it as motivation," Smith said of his pregame message. "Come in and attack from the jump all the way to the finish.

"Don't play with no fear. No hesitation. Just go out there and play your heart out."

Achane has rushed 49 times for 196 yards and had a 95-yard kickoff return for a touchdown against Appalachian State. He's averaging 150 yards in all-purpose offense.

"You've got to get him touches," Fisher said.

Texas A&M's defense is led by safeties Antonio Johnson 25 tackles) and Demani Richardson (2 1/2 tackles for losses of 12 yards). Richardson will start against Arkansas after being ejected for targeting in the first half of the Miami game.

The offensive line was boosted by the return of sophomore starting center Bryce Foster against Miami after a foot injury sidelined him the first two games.

"He made a big difference," Achane said. "He's a key. He's our starting center. He's very vocal. He tells everybody their job. He knows the whole offense."

Fisher said he was proud of the Aggies' effort in beating Miami, but that there's plenty of room for improvement.

"Still got work to do by far," Fisher said. "Nowhere close to perfect in any way. But I love the competitiveness, love the togetherness. Love the guys pulling together.

It will be Johnson's first SEC game since leading LSU to victory against Texas A&M.

"I'm super blessed to be here," Johnson said. "I enjoyed my time at LSU, but that time is gone."

Print Headline: From Tiger to Aggie