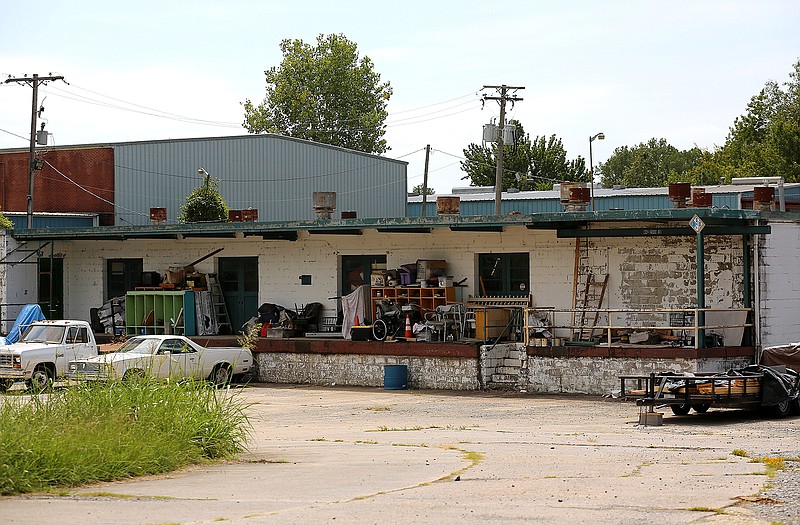 A proposal for the city of Little Rock involves the purchase property at 3101 W. 32nd St. in Little Rock, owned by a city employee, to build a homeless micro-village. Photo taken Aug. 30, 2022. (Arkansas Democrat-Gazette/Thomas Metthe)

Little Rock City Manager Bruce Moore informed the mayor and city board members in a memo Tuesday that the city will not move forward with the proposed purchase of a municipal employee's property on West 32nd Street.

The announcement came after the Arkansas Democrat-Gazette reported Sunday that two city-commissioned appraisals had indicated that the market value of the property was significantly lower than the sum the city was recently prepared to pay in order to create a homeless shelter and micro-home village at the site.

"After further review of the documents submitted by Housing and Neighborhood Programs regarding the property at 3101 West 32nd Street for a homeless village, the City will not move forward with the purchase of this location," Moore wrote in the memo. "City staff will continue to work to find a viable location for this very much needed service for those individuals needing housing and related opportunities."

Earlier this month, the city manager delayed consideration of a resolution before the city board that would have authorized the purchase of the 3.53-acre property and its roughly 8,000-square-foot commercial building near the Pulaski County jail for $460,000.

The property is owned by Rickey M. Evans Sr., who works in the Housing and Neighborhood Programs Department as a community development rehabilitation administrator.

He was hired under Director Kevin Howard in May 2020 after previously working for the city of Little Rock in other roles.

Evans acquired the property in 2018 for $55,000 from the estate of Mitchell Wayne Bobrowski, public records show. The Pulaski County assessor's office lists the appraised value of the property as $47,300.

One appraisal was provided to the Housing and Neighborhood Programs Department in December and another was delivered in July, according to city records the Democrat-Gazette previously obtained under the Arkansas Freedom of Information Act.

When the resolution was still pending before the board, city board documents said the property was listed for $499,000 and gave the cost approach appraisal value of the property as $471,000.

In an interview after a city board meeting Tuesday, Moore said he had not been informed of all the relevant information, including the fact that the property owner was a city employee.

"When I saw the initial paperwork, I recognized the name and then asked if this was the same person who worked for the city," Moore said. "So I was never informed of that."

Additionally, Moore said he was not informed that two appraisals were completed and resulted in the $85,000 and $65,000 valuations.

He also took issue with the process that resulted in the $471,000 cost approach valuation. The work that produced the higher valuation was apparently requested by a separate entity and was not what the city had initially paid for, Moore indicated.

Moore said he was "very disappointed" with how the matter had been presented.

He said he still believed the city ought to move forward with acquiring a piece of property, arguing that the work was needed and the concept supported by city officials, "but it was just not handled appropriately in my mind."

The purchase resolution was originally scheduled to be considered at the city board's Sept. 6 meeting but was delayed after a reporter's inquiry.

After the initial delay, on Sept. 8, Moore told the mayor and city board members that the purchase resolution would be deferred indefinitely.

"After reviewing the documents regarding the purchase of property at 3101 West 32nd Street, I am pulling the item from the Agenda at this point. The City will order two additional appraisals to help determine a viable purchase price," Moore wrote in an email at the time. "As soon as the appraisals are finalized I will bring the item back before the City Board."

When describing the vision for the 32nd Street site in a Sept. 1 interview, Howard said 100 micro-home units would be situated around a community center.

Individuals who arrived at the 32nd Street property would stay in one of the units for three to six months as they transitioned to permanent housing, Howard said. They would be expected to work with a case manager in the interim, he said.

Management of the shelter and micro-home village would be outsourced to an external agency, Howard indicated.

Howard said the city worked with an outside group called Hope Factory Production to identify a suitable site for the shelter and micro-home village.

Evans had no decision-making power with regard to the site, Howard said at the time. The department director said he learned that Evans was the owner of the property on 32nd Street as a result of a presentation from a member of the homelessness team.